BMW i8 Plug-in Will Carry a Supercar Price Tag 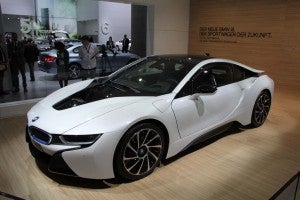 BMW is looking to take the lead in battery electric luxury vehicles with the introduction of the i8.

European automakers are hoping to electrify customers with a range of new battery-based offerings debuting at this year’s Frankfurt Motor Show, and few manufacturers are staking out a bigger presence in the emerging electrification market than BMW.

The maker has been rolling out an array of hybrids over the last several years and recently revealed the first entry into its all-new sub-brand, BMW i. The little i3 is a relatively affordable pure battery-electric vehicle that will anchor the new battery marque. At the other end of the spectrum is the plug-in i8 sports car making its official debut at Halle 8 at the Frankfurt conference center – and carrying a six-figure price tag.

The i8’s numbers are likely to surprise those who think electric vehicles have to trade performance for energy efficiency.  All the more shocking is what the BMW is squeezing out of the combined 1.5-liter 3-cylinder gas engine and electric motor combination: a total of 362 horsepower. Thanks to a lightweight carbon-fiber body and unique, low-mass platform, that will let the new BMW i8 rocket from 0 to 100 kmh – 0 to 62.5 mph – in just 4.4 seconds, the maker claims. Top speed in electric-only mode is 75 mph. 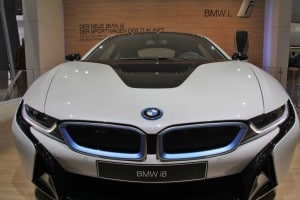 The new BMW i8 will get 22 miles in battery-only mode while launching from 0 to 60 in 4.5 seconds with the gas engine fired up.

At the same time, the new plug-in will yield an estimated 22 miles on electric power alone using its 5 kilowatt-hour lithium-ion battery pack. In U.S. trim, meanwhile, the BMW i8 is expected to get a 94 mpg rating, says BMW.

But the number that may really take your breath away is the $135,925 price tag for the 2+2 plug-in sports car. The BMW i8 may be about twice as fast, but the new model will cost nearly as much as three Chevrolet Volt extended-range electric vehicles.

Why so much? Well, the i8 is no stripped-down battery car. It will come loaded with all sorts of high-tech creature comfort, safety and performance technologies, a lavishly appointed interior and that carbon-fiber body. The composite material is super-strong and ultra-light but it’s also extremely expensive, and normally found only on the most exclusive supercars.

Also adding to the cost: the BMW i8 is the first automobile ever to use the same, hardened but ultra-thin and super-light glass most commonly found in consumer electronic applications such as the Apple iPhone.

Despite the bulky batteries, the entire vehicle weighs in at a reasonably light 3,285 pounds.

(Click Here to read about BMW’s running i8 prototype.)

To reduce energy consumption, the new i8 comes standard with LED headlights and can be ordered with industry-first laser headlamps.

The drivetrain, meanwhile, is a lot more sophisticated than the typical battery-based vehicle.  The BMW i8 is what some might call a through-the-road hybrid. The 3-cylinder gas engine powering the rear wheels itself turns out 231 horsepower and 236 pound-feet of torque through a six-speed automatic gearbox. The front wheels are powered by a synchronous electric motor producing 131 hp and 184 pound-feet of torque.

Significantly, the electric motor is paired with a 2-speed gearbox. Other makers have opted for a less sophisticated one-speed transmission.

BMW says the new plug-in can be charged through a standard home outlet, a quicker 240-volt charger or through the new high-speed Level III systems popping up around the country. That will yield an 80% recharge in 15 minutes or less. BMW recently joined General Motors as the first two makers to adopt a new industry-standard plug for high-speed charging which is expected to increase the availability of the technology.

Look for the new BMW i8 to roll into U.S. showroom next Spring.