Ford comes through with a broad mix of work and play features, from the new Powerboost hybrid to the Max Recline seats.

It’s been a tough year for auto buyers and automakers alike. But, if anything, demand for full-size pickups has been running at a frantic pace. Detroit automakers continue to dominate the market and despite strong competition from its crosstown rivals, Ford Motor Co. hopes to retain the traditional sales lead of its F-Series line.

It has a not-so-secret weapon it’s getting ready to pull out: an all-new version of the medium-duty F-150 line just getting ready to roll into dealer showrooms. And the 14th-generation pickup has a lot going for it, whether you need a serious work truck, something to haul a boat or trailer, or simply like the flexibility a big truck offers.

We had a chance to take several different versions of the 2021 F-150 out to test their mettle earlier this month, driving off-road in the rugged FX4, cruising in the King Ranch Hybrid, and towing a nearly 9,000-pound trailer with the Platinum.

Overview: It will be difficult to begin covering all the bases when it comes to the 2021 Ford F-150 which, if anything, is being offered in more configurations than ever, what with the launch of the all-new F-150 Hybrid. (And you can expect even more options to come, Ford finishing work on an all-electric version of the pickup, as well as a next-gen F-150 Raptor.)

Gone are the days when pickups were basic forms of transportation. While you can still get a base model, most buyers are moving up, and the 2021 F-150 offers many of the amenities you’d expect from a luxury vehicle, from leather-wrapped interiors to the new Max Recline seats, along with next-generation technologies, including a WiFi hotspot and the latest version of the Ford Sync infotainment system.

The new truck also offers the ability to outfit it with a built-in generator. Make that “generators,” as there are options ranging from 2.0 kilowatts all the way up to 7.2 kW.

“… For those who need real brawn, there are an assortment of powertrain options able to carry as much as 3,325 pounds of payload and tow trailers weighing in at up to 14,000 pounds …”

Exterior: The 2021 F-150 won’t qualify as the most radical update in the truck’s long history. That claim almost certainly belongs to the outgoing generation which saw Ford shift from steel to a blend of a mostly steel chassis and a body primarily reliant on military-grade aluminum alloys.

Ford sticks with this an “aluminum-intensive” approach on the new line. And the overall look of the 2021 model is an evolutionary update, Those familiar with the previous model will likely notice many of the new design details, though the 2021 model won’t stand out like the latest-generation Ram 1500.

The various versions get distinct elements, including lights and grilles so you can tell a base model from the elite F-150 Limited that will come close to the $100,000 mark when all the possible option boxes are checked.

Many of the exterior updates are functional and might be missed, initially, but will likely prove useful once you discover them. One small gem was Ford’s brilliant idea of molding a ruler into the inside of the tailgate liner. There are also cutouts to make it easy to saw the lumber you just marked up.

Optional new power running boards now stretch part of the way back beneath the cargo box to make it easier to climb up on the side to reach goods or tools. The board can be remotely deployed or operated with a tap of your foot on a hidden switch. One surprising omission: sliding tie-downs in the cargo bed, something Nissan and several other competitors offer.

Interior: As we noted earlier, you still can get what passes, these days, for a base truck, the XL model, with a naturally aspirated 3.3-liter V-6. Even there, however, you’ll get some useful standard features, such as a backup camera, automatic high beams and a suite of advanced safety and driver-assistance systems.

Move up to the higher trims, such as the King Ranch, Platinum and Limited and you might think you’ve climbed into a high-line luxury sedan. The cabin is certainly about as roomy as a full-size S-Class with a Super Crew model.

They’re lavished in leather and wood and real metal accents. And they introduce some great new features for 2021, including the new Max Recline seats that fold down like what you’d find on a Business Class jet.

Another new feature lets the big shift lever fold down into the console so you can open up the cover of the center console, much like the tray on a First Class airline seat. It’s big enough to spread out a meal or lay out a laptop computer and paperwork.

All versions of the 2021 Ford F-150 now come with 10-speed automatic transmissions and, depending upon model, you can get a low-speed transfer case in trim packages like the FX4 for off-roading. Power, again depending upon trim level, can be sent to the rear axle or to all four wheels.

Technology and Safety: The F-150 is loaded with smart technology, starting with larger touchscreens – now either 8- or 12-inches. Unlike some competitors, however, Ford retained buttons for numerous vehicle functions, such as climate control, something it said owners forcefully demanded.

The infotainment system is the latest take on Ford Sync, Sync4 in this case, with optional wireless versions of Apple CarPlay and Android Auto. And it pairs with an updated Ford Pass smartphone app that can operate or check on a variety of vehicle functions.

Then there’s Co-Pilot360, with an array of standard advanced driver-assistance systems, such as forward-collision warning with automatic emergency braking. Upgrades add features like blind-spot detection and active cruise control.

The 2021 F-150 will become the first vehicle in the full-size segment coming standard with smartphone-style over-the-air, or OTA, updates. These will allow Ford to revise onboard software, even add new features automatically, said Stuart Taylor, executive director of the automaker’s connectivity team, adding that “updates will be short, often completely invisible.”

One of the features expected to become available next year will be Active Drive Assist, a technology Ford announced earlier this month for the Mach-E long-range battery-SUV. It will permit a motorist to drive completely hands-free on about 100,000 miles of U.S. limited-access roadways that have been mapped in super-high resolution. You’ll need special hardware which buyers can opt for now, then wait for the software to be finalized and downloaded next year.

Among other technology, the new F-150 will be offered with an array of cameras providing various views, including one that essentially lets you look back while towing as if there was no trailer. Ford also expects to see strong demand for the new

F-150’s onboard generator, which will be available in various power levels, can deliver either 120- or 240-volt current.

Drive Impressions: Ford invited me out to its Romeo, Michigan proving grounds to get a daylong feel for the new F-150. I was able to check out three different versions, starting with the premium King Ranch Edition equipped with the new Powerboost hybrid drivetrain.

Forget anything you thought you knew about hybrids. The Powerboost is one of the most powerful engines in the 2021 F-150 family, and it comes through in a variety of ways.

It delivers immediate, off-the-line grunt and keeps pulling all the way up to (and beyond) highway speeds. It’s smooth and I was hard-pressed to figure out when the 3.5-liter V-6 portion of the driveline shut down or started up again.

There’s a lot of mass to the King Ranch with a CrewCab and you’ll feel it a bit going into hard turns, but the truck is, on the whole, easy to manage on the road – if not quite up to the comfort level of the latest Ram 1500 line.

It handily pulled through mud, ruts and sand, and scampered up steep grades. The Terrain Response system let me readily adjust a variety of vehicle settings to handle each different road condition. One of the more quirky features, however, is the truck’s Hill Descent Control. Most other trucks let you preset your descent speed. With the FX4 it locks in at the downslope speed when you release the brakes. 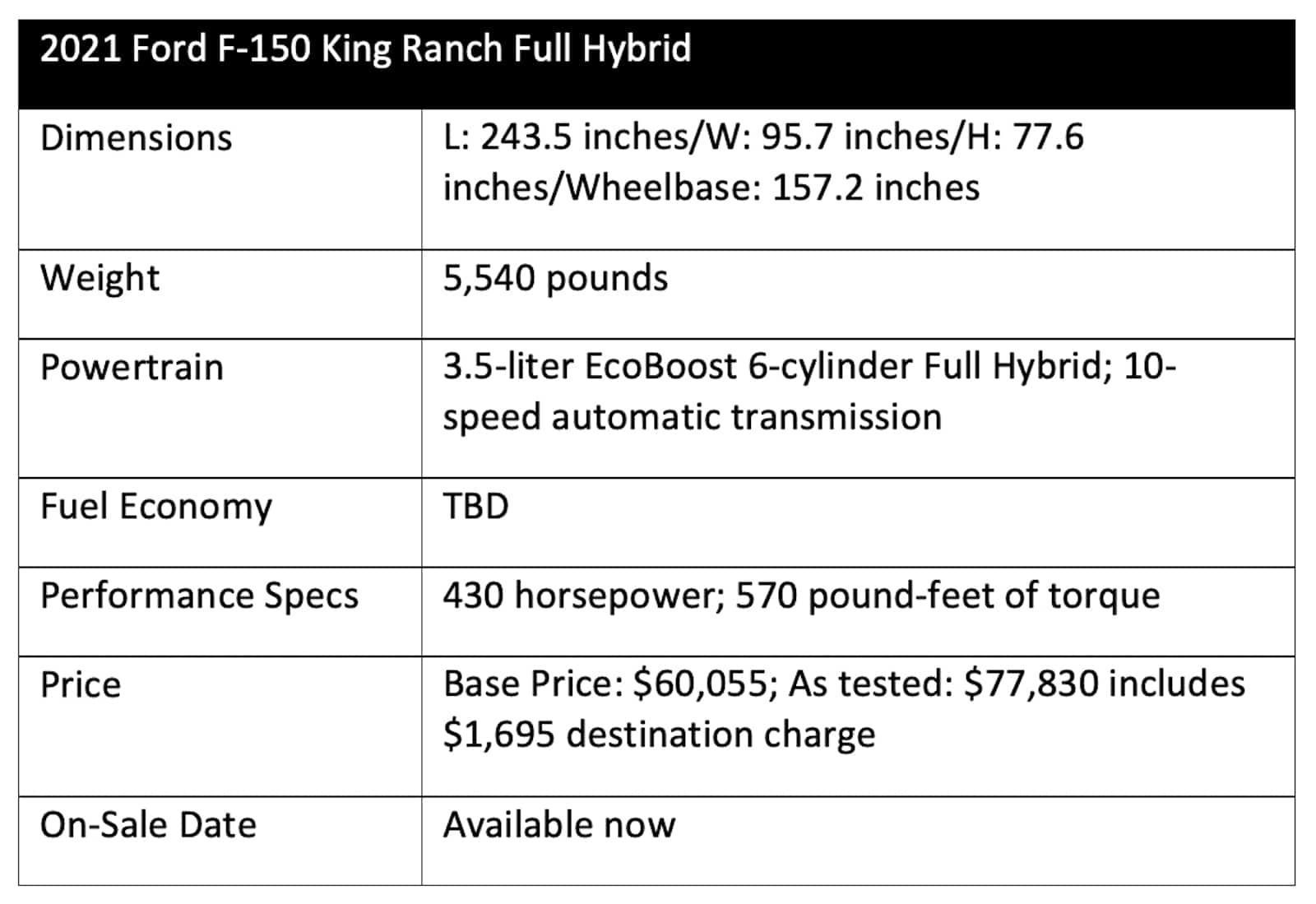 I ended the day pulling an 9,000-lb boat and trailer and, thanks to that 3.5-liter EcoBoost, I might as well have been pulling half that load. Even heading up one of the steepest hills at the proving grounds I rapidly gained speed, and the F-150’s suspension kept the trailer firmly under control. Set to launch the boat? The truck’s unique trailer back-up system helps even novices maintain control, something further enhanced by the array of cameras you now can order for the F-150. Among other things, they’ll let you look behind you as if the trailer had vanished.

Wrap Up: This could be called “The Year of the Pickup,” considering how these trucks have continued to sell at a frantic pace even while the pandemic chilled out much of the rest of the market. There’s good reason, considering all the options buyers have. The outgoing F-150 was a solid and reliable pick. But the 2021 Ford F-150 takes things to a new level. It’s available in a broad variety of trim levels, cab and bed packages, and offers the broadest array of engine options in its class. That includes the new high-mileage Powerboost hybrid that I expect to win over plenty of pickup buyers.

Ford knew it had to come through with an update that was tough, capable and attractive and it pulled that off handsomely. While it doesn’t score best-in-class in every category, it comes close and that should let the Blue Oval maintain its leadership in the medium-duty pickup market. 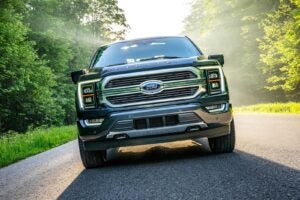 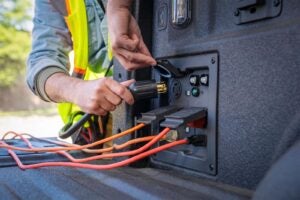 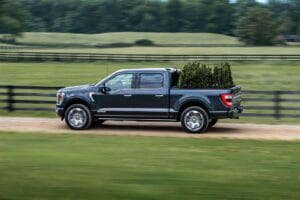