A solid, fun performance sedan despite some minor concerns.

Cadillac is on a journey of reinvention, albeit one that has lasted for nearly two decades. We’ve seen the automaker struggle to find the precise design formula, the right powertrain line-up, the right model mix and, of late, even the right product nomenclature.

It’s in the midst of another transformation as it abandons the familiar ATS and CTS models and, more or less, replaces them with the new CT4 and CT5 sedans. Adding to the confusion, it is bringing back the V-Series, but not as Caddy fans might anticipate.

The “V” designation no longer graces the brand’s most powerful models, that role going to the new Blackwing line. If it helps, think of it as the equivalent of Audi’s A, S and RS performance ladder.

Overview: So, we were quite anxious to get our hands on the new 2020 Cadillac CT4-V so see how this strategy plays out from behind the wheel. A quick look at the specs might seem disappointing, the ATS-V’s 464-horsepower twin-turbo V-6 replaced by a turbo-four making a relatively meager 325 hp.

Yet, after spending some time literally taking the CT4-V to Hell (Michigan) and back, we found ourselves much more impressed than we expected.

Exterior: Cadillac execs insist the base CT4 is not a direct replacement for the old ATS. The outgoing model was something of a “tweener,” where the new sedan more directly targets the likes of an Audi A3 or BMW 2-Series. That said, there’s not all that much difference in size, the wheelbase between ATS and CT4 lines essentially identical.

… Visually, the new sedan follows the latest Cadillac design theme which has been retrenching from the extreme angles of the brand’s breakthrough Art & Science language …

It’s still more crisp and angular than most of its competitors, but the overall look is more rounded, with a flowing, coupe-like roofline and softer curves to the side profile. Even the lighting has been revised. There are new horizontal slit headlamps, though the LED running lamps retain the virtual lighting cue that Cadillac is known for.

Interior: If anything, the cabin of the new CT4 line feels a bit more cramped than the outgoing ATS. Frankly, interiors are, to our way of thinking, the single weakest point in the current Cadillac line-up. They’re reasonably luxurious but don’t quite have the level of plush refinement you’d expect of products in the luxury class. Pop the trunk, for one thing, and you might as well be looking at a Chevrolet in terms of detailing and execution.

That said, the CT4, and the CT4-V add plenty of new features, from the slick power seats to the next-generation infotainment system. There’s also an active noise management system that keeps things quiet – until you’ve got your foot to the floor. We’d just like Caddy to upgrade the cabin a bit and would suggest a look at what crosstown rival Lincoln has been doing of late.

Powertrain: Here’s where you might expect to hear us really whine, considering the sharp downgrade in the V-Series drivetrain. Surprisingly, once you clearly understand the new performance line-up, it all makes sense. And, as the new center of the mix, the CT4-V really comes through in shining form.

The stock version of the CT4 is offered with two engine options, a base 2.0-liter four making 237 hp and 258 lb-ft, as well as a 2.7-liter inline-four that takes the numbers up to 310 and 350. In the V you get a recalibrated version of that 2.7-liter package jumping up to 325 hp and 380 lb-ft of torque. It may not sound like much of a difference on paper, but it becomes readily apparent on the road.

At launch, the torque is what impresses. Thanks to a trick dual-volute turbo design, power comes on fast, reaching its peak at just 2,000 rpm. That really paid off when we took the 2020 CT4-V out on our favorite Michigan roads in the appropriately named town of Hell. The winding route requires you to get constantly on and off the throttle and, with the assistance of the car’s 10-speed automatic, it always seemed to be in just the right gear to give us a solid launch coming out of a corner. The transmission can get a bit busy in the Tour mode setting, but it proved spot-on in Sport.

The CT4-V, we need add, can be ordered in either rear or all-wheel-drive configuration. We tested the latter and would recommend that option.

Technology and Safety. Caddy made headlines when it introduced its Cadillac User Experience, or CUX, a few years back. The completely touch-based system seemed brilliant – until it came time to make it work. Then, things didn’t quite live up to expectations, commands often lagging in execution. The good news is that the latest iteration found on the CT4 line-up all but completely resolves our previous concerns. The system is much quicker to respond, whether to touch or voice commands, Cadillac having adopted a new electrical architecture, dubbed the “Vehicle Intelligence Platform.”

An 8-inch touchscreen handles Android Auto and Apple CarPlay, as well as an optional navigation system. There’s wireless phone charging, Amazon Alexa, and we would recommend the auxiliary rotary knob to make the infotainment system easier to operate.

… The new system is not only faster but has much more advanced cybersecurity built in, and it also permits smartphone-style over-the-air updates …

Caddy officials weren’t offering specifics but we expect that the OTA system will eventually allow software revisions to most all of the CT4’s microprocessor-based technology.

On the safety side, the CT4 gets the expected list of advanced driver assistance systems, including active cruise, forward collision with auto braking, blind-spot detection and more.

The sedan also will soon share the Super Cruise system first introduced on the big CT6 sedan. That’s one of the market’s most advanced semi-autonomous technologies, allowing hands-free driving on about 200,000 miles of limited-access freeways and other roads. And, when it does migrate into the CT4 and CT5 lines, it will get enhanced capabilities, including the ability to tap the turn signal to automatically execute a pass.

Drive Impressions:  As our drive through Hell reminded us, performance is more than just about power. And here’s where the CT4-V really shines, thanks to its mechanical rear limited-slip differential, magnetic ride control suspension and Continental SportContact 6 summer tires.

The sedan remained glued to the pavement, even during a sudden downpour. The suspension soaked up bumps while minimizing body roll, and the V’s steering was entirely predictable and precise. Better yet, the set up proved forgiving, especially when we had to abort a passing maneuver.

What we particularly love about the latest iteration of the magnetic ride control system is how transformative it can be. In Sport mode it keeps the sedan firmly hunkered down. In Tour, it provides the sort of boulevard-smooth dynamics that Detroit luxury sedans used to be known for. 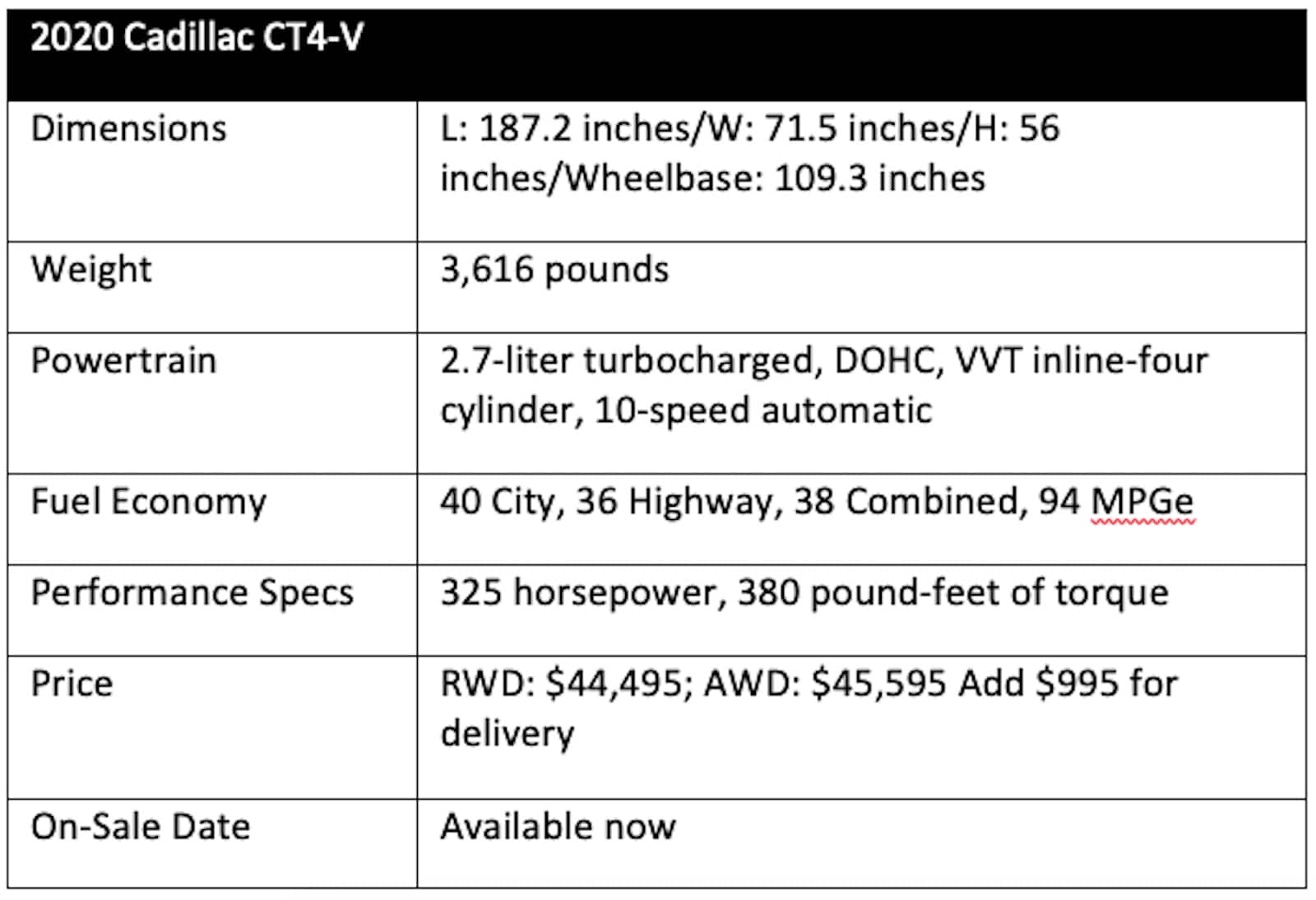 Wrap Up: The luxury market can be a tough place to compete these days, with plenty of product available from a long list of brands. It’s especially tough to play in the sedan market, considering shrinking sales. So, those who hope to survive really have to deliver.

Though we do have our concerns about the 2020 Cadillac CT4-V, they are generally minor. And the sedan’s positives dominate. This is a solid product that is just plain fun to drive. Better yet, it’s the sort of performance sedan that can serve up weekend adventures while still being a comfortable daily driver.