A solid package, especially for the price. 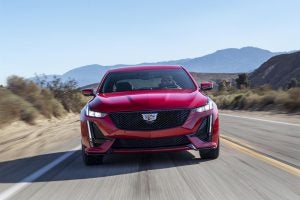 The 2020 Cadillac CT5-V is not a direct replacement for the old CTS-V.

The coronavirus pandemic has changed daily life in many dramatic ways. For we auto scribes, it has meant a temporary halt to our near constant, cross-country travel, racing from one new car program to another. The good news is that we’ve been able to keep a relatively steady flow of new models coming to our home offices, a list that, in my case, includes the new 2020 Cadillac CT5-V.

Those who have followed General Motors’ premium brand over the past decade or so will recognize the “V” designation. But here’s where things get confusing. With the old CT6 sedan, a “V” badge was reserved for models getting the maximum level of performance boost. Going forward, Caddy recently announced, those models will be dubbed “Blackwing.” The CT5-V, it turns out, gets a mid-level enhancement, along the lines of the earlier VSport models.

What exactly does that translate into? That was something we were anxious to find out after a social distanced handover of car and keys and a subsequent day of driving that took us out to one of our favorite routes through the curiously named Hell, Michigan. A perfect place to drive like a demon possessed. 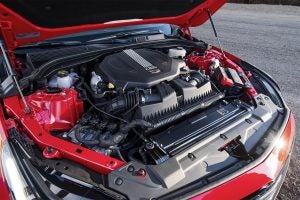 As part of its ongoing makeover, Cadillac has dropped its ATS, CTS and CT6 sedans. Like the rest of the industry, it is putting much of its focus on SUVs these days but it hasn’t given up on conventional “three-box” designs entirely, with the CT4 and CT5 models holding up the sedan side of the line-up. As the numbers suggest, the “5” is the bigger and more lavishly equipped of the two.

The basic sedan is handsome, albeit less edgy than we’d seen with earlier Cadillac products boasting the brand’s Art & Science design language. There’s a more sensuous sweep to the hood, more sculpting to the fenders and doors, and the CT5 gets a fastback roofline that flows smoothly into the rear decklid. Somewhat controversially, the sedan features horizontal headlamps, but retains Caddy’s signature vertical lighting theme with its running lamps. Lighting is LED across the board.

The CT5-V gets some modest but distinctive tweaks, including a unique grille and fascia, front and rear, quad exhaust tips and its own taillight layout. 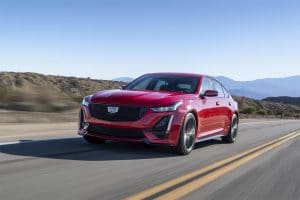 As with the “base” CT5, we find the interior a bit blander than we’d like. Caddy started pushing things with the slow-selling XLR plug-in hybrid, a few years back, and then backslid. No, you won’t confuse the CT5 for a Chevrolet, but the brand could take a tip from newly resurgent Lincoln on how to make a high-line model look truly distinctive and luxurious.

That said, the use of leather and carbon fiber trim is complemented by some well-executed high-tech details. The automaker has significantly upgraded its Caddy Cue infotainment system, starting with a 10-inch display. It has a better interface and, most importantly, no longer requires patience for a command to be executed. There’s also a volume knob and a control knob on the center console that is far easier to use for many functions, such as zooming in and out on a map. Add Apple CarPlay, Android Auto and built-in Amazon Alexa. One can order the camera-base rearview mirror, and the base CT5 will soon get Cadillac’s Super Cruise semi-autonomous drive system. It’s unclear when it will be added to the CT5-V, however.

Another plus: while shorter overall, the wheelbase of the CT5 has been stretched about 1.5 inches compared to the old CTS, with that largely given to backseat passengers in terms of more legroom. 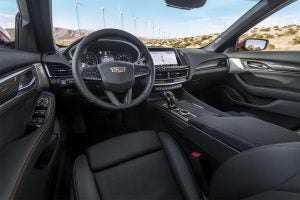 The CT5-V’s interior is handsome but a bit uninspired.

Of course, what really matters to a CT5-V buyer is going to be performance. No, this is not a match for the old CTS-V with its neck-snapping, 640-horsepower supercharged V-8. But numbers don’t always tell the full story. The 3.0-liter turbo-V-6 in the CT5-V makes a solid 360 hp and 405 pound-feet of torque. Not quite as fast off the line but it still is quick to put a smile on the face of any performance fan.

Acceleration is brisk and there is none of the dreaded turbo-lag you get from far too many sport sedans. The throttle is intuitively responsive, as is the V’s 10-speed automatic transmission. Up and down shifts are virtually transparent in routine driving, but turn crisper when the pedal is pressed to the floorboards.

Using the Performance Traction Management system, a driver can dial in precisely the sort of behavior they want, the system impacting a variety of vehicle functions, including steering boost, throttle response, shifts, “nanny controls” and suspension stiffness. 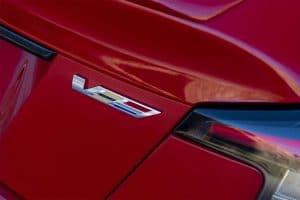 Perhaps our favorite feature on the CT5-V is the magnetic ride control system that uses a magnetorheological fluid to constantly adjust damper response. In lay terms, the system uses a magnetic charge to make the oil in the dampers change adjust from stiff to soft or anywhere in-between. And each shock can do so individually in the time it takes to travel less than 2 inches at 60 mph.

On bumpy roads, the system smooths out the roughest pavement. On a track or backroad twisties, it gives the CT5-V a cat-like grip. Of course, that’s helped by the use of Michelin Pilot Sport 4S tires.

No, the CT5-V isn’t a direct replacement for the old CTS-V. For that you’ll have to wait for the Blackwing edition coming later this year. But for most potential customers, the new model is more than satisfying. All the more so when you consider it comes in at $48,690 – including $995 in delivery fees. A similarly equipped CTS-V would have set you back almost $90,000.

The 2020 Cadillac CT5-V goes up against some stiff competition from the likes of the Audi S4, BMW M340i and the Mercedes-AMG C43. It’s rarified territory, but we’re confident that the new Caddy will be able to stand up on its own.