The future may include some truly radical approaches.

Even as the newest version of the X5 gets ready to roll into showrooms around the world, BMW is looking at ways to expand its presence in the fast-growing market for sport-utility vehicles.

The automaker took what seemed like a big risk when it launched the original X5 “Sports-Activity Vehicle” in 1999, but dmand for high-line utes has grown exponentially, leading it to move down-market, all the way to the base X1, with a new flagship, the X7, set to debut next year.

“We see even more demand from our customers,” said Carson Gruber, the BMW AG marketing executive overseeing high-line products like the X5 and X7, during an interview with TheDetroitBureau.com. “BMW is a learning company….and we’re capable of identifying new trends.”

(BMW unleashing high-performance version of X2. Click Here to check out the M35i.)

The first three generations of the BMW X5 sold a collective 2.1 million vehicles, and the Bavarian automaker is hoping to generate even strong demand with the debut of the fourth-generation model, known internally by the codename G05. It is more than just a warm-over, adopting an entirely new platform, dubbed the Cluster Architecture, or CLAR, which will be shared with a variety of other BMW products, including the all-new X7.

The bigger, three-row SAV will fill a critical gap in the BMW line-up, said Gruber, helping it tackle such competitors as the Cadillac Escalade, Land Rover Range Rover, Lincoln Navigator and Mercedes-Benz GLS.

It also will serve as what will now be three distinct flagships for the BMW brand, including the classic 7-Series sedan and the reborn 8-Series.

One of the big questions is whether the X7 will cannibalize demand for the X5, but Gruber said he doesn’t expect that to be a major concern. The new model should draw from a different niche of buyers, many of whom might have left BMW anyway for the larger utility vehicles offered by competitors. And the X5 has traditionally drawn a steady influx of buyers from both outside BMW and from brand loyalists looking to move out of a sedan and into a ute.

That shift can be seen across the industry, and especially in the luxury market. Even high-line marques like Rolls-Royce, Bentley, Maserati and Lamborghini now offer SUVs, with Aston Martin and Ferrari set to follow.

Some of the biggest growth is taking place at the lower end of the market however, where BMW now offers models such as the pint-sized X1 and X2, as well as compact offerings such as the X3. The Bavarian brand has also pushed the edge of utility vehicle design with coupe-like models such as the X4 and X6.

That raises the question of whether there are still other opportunities, considering BMW has used every number from 1 to 7 for its SAV family.

The challenge, said Gruber, is that “We (don’t) want to just come up with another SUV, but one that’s a real BMW.” But he quickly added that he sees “an opportunity for luxury brands like BMW to expand their range of appeal.”

(Click Here to check out the new BMW Z4.)One of the ways BMW plans to expand its appeal is to go green. The new X5 will debut with a global mix of two gas and two diesel powertrains. It will later add a higher-performance M version and, sometime next year, a first-ever plug-in hybrid will follow. BMW officials have said that, going forward, they will offer electrified options for virtually all of their product lines.

n even more radical approach is in development. One of the first examples will be the BMW iNext, which is expected to be an edgy blend of a crossover and conventional BMW sedan using an all-electric drivetrain. It’s planned for a debut around 2021.

With utility vehicles continuing to cut into the conventional luxury car market, and with electrified drive technology expected to gain significant momentum in the coming decade, vehicles like the iNext could help BMW find even more ways to flesh out its SAV line-up. 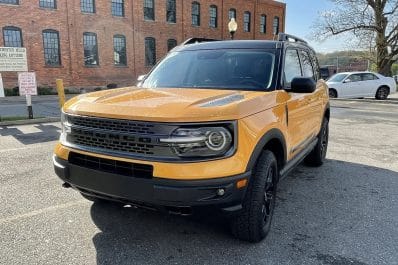