Is that a hint of the new Toyota Supra we see? 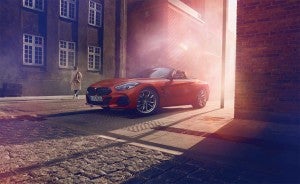 The new BMW Z4 roadster offers few hints that it shares its roots with the new Toyota Supra.

Sure, we got a look at the concept version of the new BMW Z4 a full year ago, but there were still plenty of skeptics wondering exactly what the Bavarians would come up with when it was time to roll out the production model. Skepticism was, perhaps, in order considering they had to coordinate development of the next-generation roadster with Toyota which is using the underlying platform for its reborn Supra.

Anyone who expected to see a badge-engineered convertible can now breathe a sigh of relief. Almost precisely a year after revealing the concept version, BMW is back in precisely the same place, Pebble Beach, to roll out the production version, and if first impressions – and some hints about the specs – matter, the new Z4 should generate some serious buzz.

We’ll have to wait another month to get all the specifications, BMW tells us, hoping to play out the anticipation card for as long as possible, but the automaker has one significant detail to reveal, the Z4 M40i edition will rely on an updated version of the familiar 3.0-liter straight-six to get it up to 60 mph in an estimated 4.4 seconds.

(Infiniti plans to blend classic and modern with a roadster concept coming to Pebble Beach. Click Here for more.) 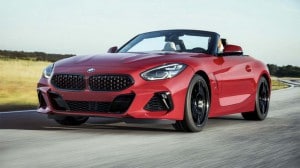 It’s been almost 17 years since the first version of the Z4 took a bow and while it has been a credible contender in the small but competitive roadster market, it was never a real star. Whether it can really break out now remains to be seen. If anything, it’s going to have still more competition from the upcoming Supra. The good news is that, based on what we’ve seen with the race version of the Toyota the two models will have some significant visual and technical differences and likely target different audiences.

What we’re seeing out in Pebble Beach is what BMW calls the Z4 First Edition, painted in Frozen Orange Metallic, with a contrasting BMW Individual High Gloss Shadow Line, and an anthracite fabric top. No origami metal roof here. This is a classic roadster. That said, the electronically powered canvas cover can raise and lower in a mere 10 seconds.

The new Z4 boasts a low and wide stance, with a broad take on the Bavarian double-kidney grille Framed by LED lamps that flow back into the front corner panels. There’s a lot going on below the bumper, a central intake sucking in air for the turbo-six and additional inlets to provide both cooling air for the big M Sport brakes and the air curtain system aimed at reducing mileage – and performance – robbing turbulence around the First Edition’s 19-inch front alloy wheels. 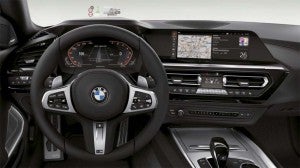 Inside, the Z4 M40i First Edition was shown in hand-stitched black leather. The overall instrument panel will look familiar to BMW aficionados, with a driver-focused layout. There’s the familiar iDrive controller, of course, and a head-up display provides extensive data that, like the instrument cluster, can be readily reconfigured to personal tastes. There are twin display screens and a Harman Kardon surround sound audio package.

The new Z4 promises to have a lower center of gravity than the old roadster, with a near 50-50 weight distribution. Handling is further enhanced by the cars M-tuned sport suspension.

(Audi will bring the all-electric PB 18 e-tron concept to Pebble Beach. Click Here to check it out.) 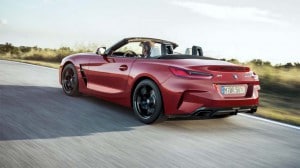 The M Sport division was busy, in fact, setting things up on the Z4 M40i, providing that brake package, as well as the roadster’s rear differential.

We heard some preliminary numbers for the Z4’s powertrain, though final figures are set to be released on September 18th. In the meantime, expect to see that turbo-six push out something on the order of 382 horsepower and 369 pound-feet of torque. By the time BMW launches all the anticipated variants, however, it should cover quite a bit of range – and price segments.

How pricing will compare to the old roadster is also up in the air. But we can look to see the somewhat tamer Z4 30i roll into U.S. showrooms earlier next spring, with the M40i to follow a few months later.

(Chinese-funded Byton is one of several new automakers looking to make a splash in Pebble Beach. Click Here for more.)