The title is not "unified" though as Forbes still lists Jeff Bezos as the titleholder.

The ongoing run up of Tesla Inc.’s stock price has made the EV maker the world’s most value automotive company several times over. However, it’s not just the company that’s sitting atop the money list now.

With the company’s gains Thursday, the 49-year-old Musk saw his net worth soar to more than $188.5 billion, $1.5 billion more than Bezos, Bloomberg reported. The brash and oft-impatient, which has worked in his favor many times, Musk has seen his personal wealth skyrocket as the value of Tesla shares has leapt eightfold.

He has a 20% stake in the carmaker and about $42 billion of unrealized paper gains on vested stock options, according to the Bloomberg report.

The battle of the richest currently mirrors the boxing world where are multiple champions in the same weight class. In this case, the Forbes Billionaire’s list still listed Bezos as the top dog with a $7.8 billion bigger balance sheet. Forbes dings the EV maker because some of the stock he owns has been pledged as collateral for personal loans, the company said.

Tesla isn’t Musk’s only venture, with the serial entrepreneur owning controlling stakes in the Boring Company, which builds tunnels designed to alleviate urban traffic; Neuralink, a startup company developing brain-machine interfaces; and SpaceX, which produces rockets that launch payloads into space while landing back on Earth so they can be reused.

The passion for rockets and space is something he shares with Bezos, who created Blue Origin. Much like SpaceX, the company is focused on the development of reusable rockets. The company’s mission calls for those multi-use boosters to take people into space. 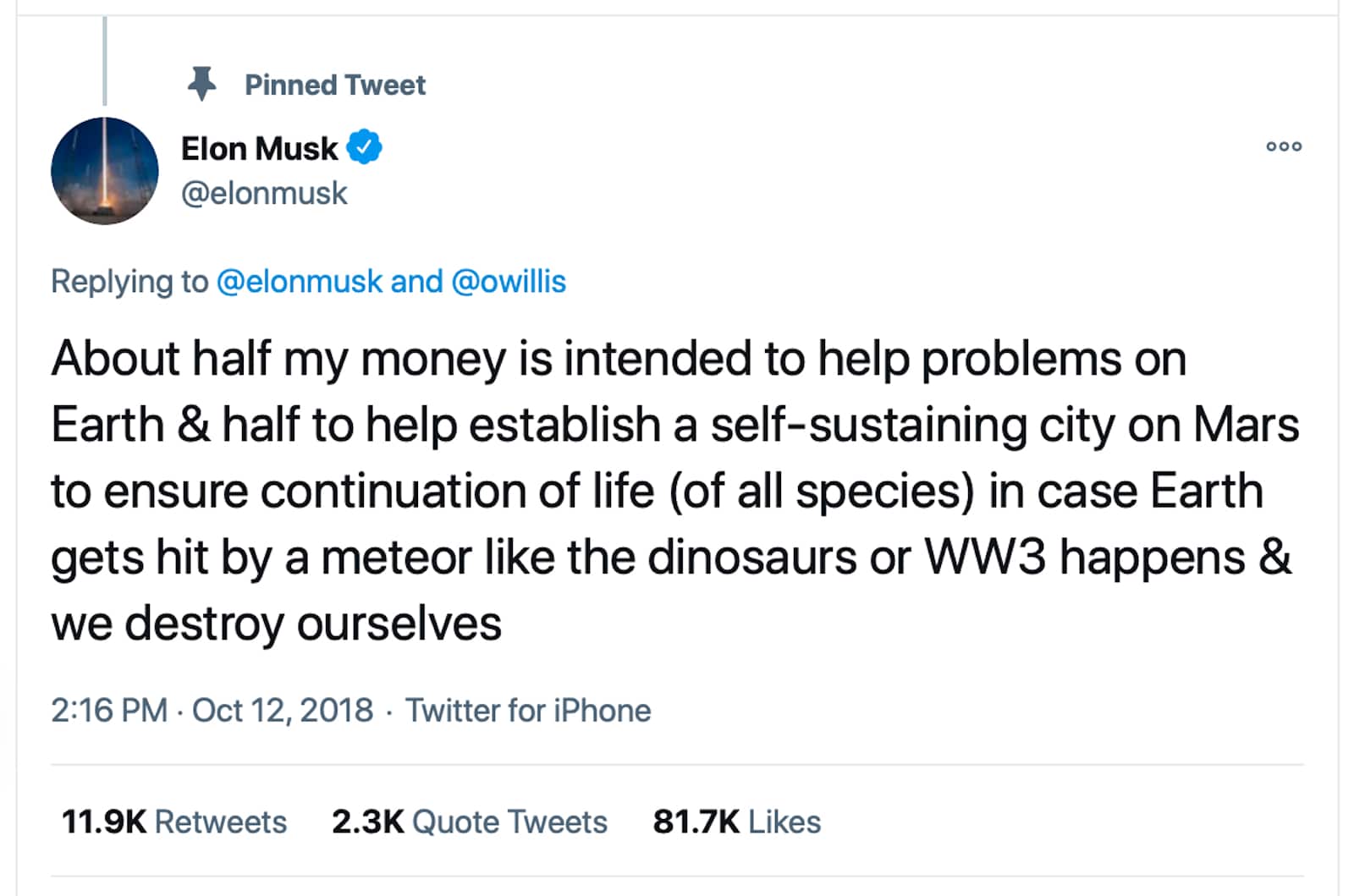 Musk was rather blasé about the milestone, tweeting out “How strange” and then “Well, back to work,” He later pinning an earlier tweet about his fortune to the top of his feed.

“About half my money is intended to help problems on Earth & half to help establish a self-sustaining city on Mars to ensure continuation of life (of all species) in case Earth gets hit by a meteor like the dinosaurs or WW3 happens & we destroy ourselves,” he tweeted Oct. 12, 2018.

The new title is just the latest bit of good news for Musk, who was Tesla fall only just short of his stated goal of delivering 500,000 vehicles worldwide, despite the impact of the COVID-19 pandemic. The EV maker, which has enjoyed four consecutive profitable quarters to be placed on the S&P 500 index, sold 499,550 vehicles in 2020, falling just 450 short of the goal.