Tesla CEO Elon Musk and the company fought all the way to the end, but they didn’t make the oft-stated goal of delivering 500,000 vehicles in 2020, despite the impact of the coronavirus pandemic.

However, despite delivering 499,550 vehicles, which Tesla reported Jan. 2, investors were impressed enough to push the company’s stock even higher, inching Musk a little closer to the title of world’s richest man. The stock was trading at $737.22 per share, up 4.47%, in late morning market action.

Musk, as he often does, rallied the troops in the waning weeks of the year with emails encouraging them to work hard and offer any suggestions that may help the California-based EV maker hit the 500K mark. The company delivered 180,570 vehicles in the company’s fourth quarter, setting a new benchmark. 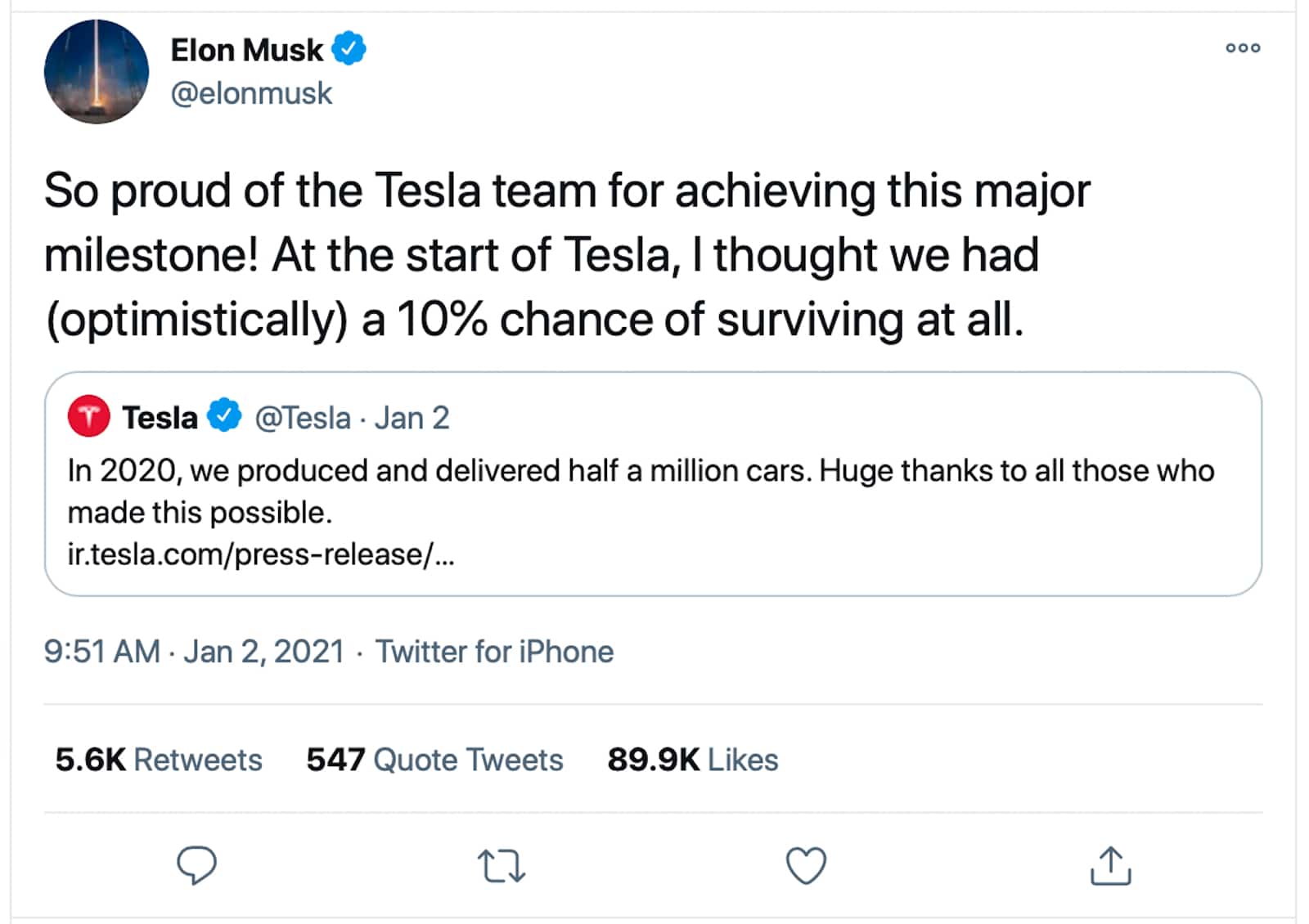 Unsurprisingly, the vast majority of vehicles Tesla delivered this year were Model 3 and Model Y vehicles, totaling 442,511 units. Model S and X comprised 57,039 deliveries throughout the year. During the fourth quarter, the split was 161,650 Model 3 and Y units and 18,920 Model S and X vehicles.

“Thank you to all of our customers, employees, suppliers, shareholders and supporters who helped us achieve another great year,” the company said in the press release revealing the delivery numbers for the year.

Musk echoed the sentiment, albeit with a little more snark in a tweet, writing “So proud of the Tesla team for achieving this major milestone! At the start of Tesla, I thought we had (optimistically) a 10% chance of surviving at all.”

After one Twitter follower offered a congratulatory tweet lauding Musk for his perseverance, Musk replied, “Tesla is responsible for 2/3 of all the personal & professional pain in my life combined. But it was worth it.”

Musk has a long history of feuds with investors looking to short the company’s stock, the SEC and most recently with state and local governmental officials in California. Plus, the CEO is known for spending between 80 to 100 hours a week at the company’s plant in Fremont, California, sleeping onsite some days.

The company, which he at one point was in “production hell” at the plant, is now in full growth mode. The company recently began exporting Model 3 sedans built at its Shanghai plant to Europe as it continues construction of its plant just outside Berlin, Germany. The China plant has started production of the Model Y as well with deliveries “expected to begin shortly,” the company noted.

The EV maker enjoyed a stunningly impressive year in terms of its financial performance, turning profits in three of the four quarters reported – it’s expected to report a Q4 profit as well – and in four consecutive quarters. The company split its stock 5-for-1 Aug. 31 and it has continued to rise since the move. The company is now part of the S&P 500, becoming the largest company to ever join the index when it was added last month.

One response to “Tesla Narrowly Misses 500K Delivery Target for 2020”