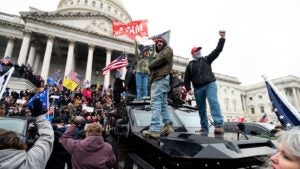 Trump supporters staged an insurrection at the Capitol Building in Washington, D.C.

The rioting that swept Washington, D.C. Wednesday triggered by President Donald Trump’s false and disproven claims of election fraud triggered a nationwide backlash with some of the most severe responses coming from groups that traditionally steer clear of electoral politics.

One of the harshest statements came from the National Association of Manufacturers which not only described the insurrection as an attack on “the vision of America,” but also called for the use of the 25th Amendment, which could lead to an immediate removal of Trump from the role of president.

“This is not the vision of America that manufacturers believe in and work so hard to defend,” said Jay Timmons, NAM’s president and CEO. “We are trying to rebuild an economy and save and rebuild lives. But none of that will matter if our leaders refuse to fend off this attack on America and our democracy — because our very system of government, which underpins our very way of life, will crumble.” 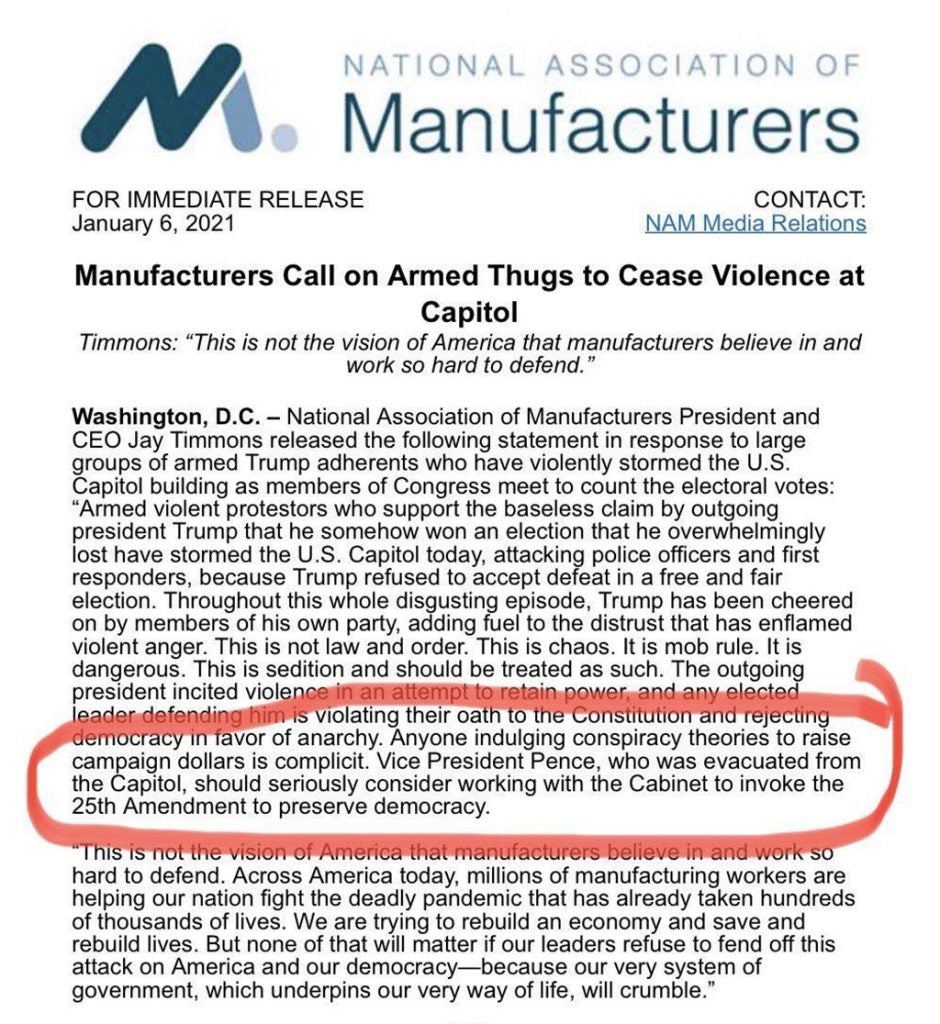 General Motors, Honda, Subaru and Toyota all have executives on the NAM board of directors. There are several automotive supplier and heavy truck executives on it as well.

The trade group’s statement also stressed that the rioting – which culminated in a mob takeover of the U.S. Capitol – “is not law and order (but) mob rule.” And it called Vice President Mike Pence to “seriously consider” calling on the Trump Cabinet “to invoke the 25th Amendment to preserve democracy.”

Adopted Feb. 10, 1967, the 25th Amendment covers issues related to presidential succession and incapacity. Among other things, it allows for a sitting president to be removed, either temporarily or permanently if deemed unable or unwilling to perform the duties of the office.

But it requires the vice president and a “majority of either the principal officers of the executive departments or of such other body as Congress may by law provide,” to declare in writing the president is “unable to discharge the powers and duties of his office.”

Were Section 4 of the amendment invoked, Vice President Pence would immediately become president, though only until President-elect Joe Biden were to be sworn in on Jan. 20.

In conversations with TheDetroitBureau.com, officials with several automakers expressed similar concerns about what could happen should Trump remain in office during the next two weeks, escalating his efforts to reverse the results of the November election. On Tuesday afternoon, the president told his followers gathered in Washington, including members of the white supremacist group Proud Boys, to go home. But he also praised them and further escalated his claims that the election was stolen.

Shortly afterwards, Twitter announced a 12-hour ban on posts by the president. 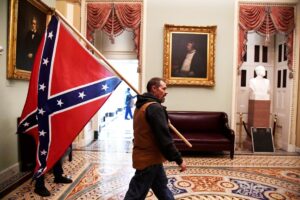 With so much at risk, automakers tend to avoid direct involvement in politics. Ford, General Motors and Toyota have all come in for beatings from the Twitter-loving Trump since he launched his campaign and captured the White House more than five years ago. But all three also, as an official with one company said on background, “felt it necessary to speak out” in light of the Wednesday riots.

“The peaceful transition of power is a cornerstone of American democracy, and regardless of politics the violence at the U.S. Capitol does not reflect who we are as a nation. It’s imperative that we come together as a country and reinforce the values and ideals that unite us,” said GM Chairman and CEO Mary Barra in a statement to TheDetroitBureau.com.

With similar sentiments, Toyota said in a statement requested by TheDetroitBureau.com: “Lawlessness has no place in our society. Toyota urges everyone to demonstrate restraint and patience, and allow for the peaceful transfer of power that is the hallmark of our country. Tomorrow is a brighter day and democracy will, and always has, prevailed.”

The timing of Wednesday’s terrorist assault on the Capitol was no coincidence. It was intentionally planned to disrupt the Constitutionally mandated counting of the Electoral College votes that would complete the presidential election process and officially name Joe Biden the incoming president. 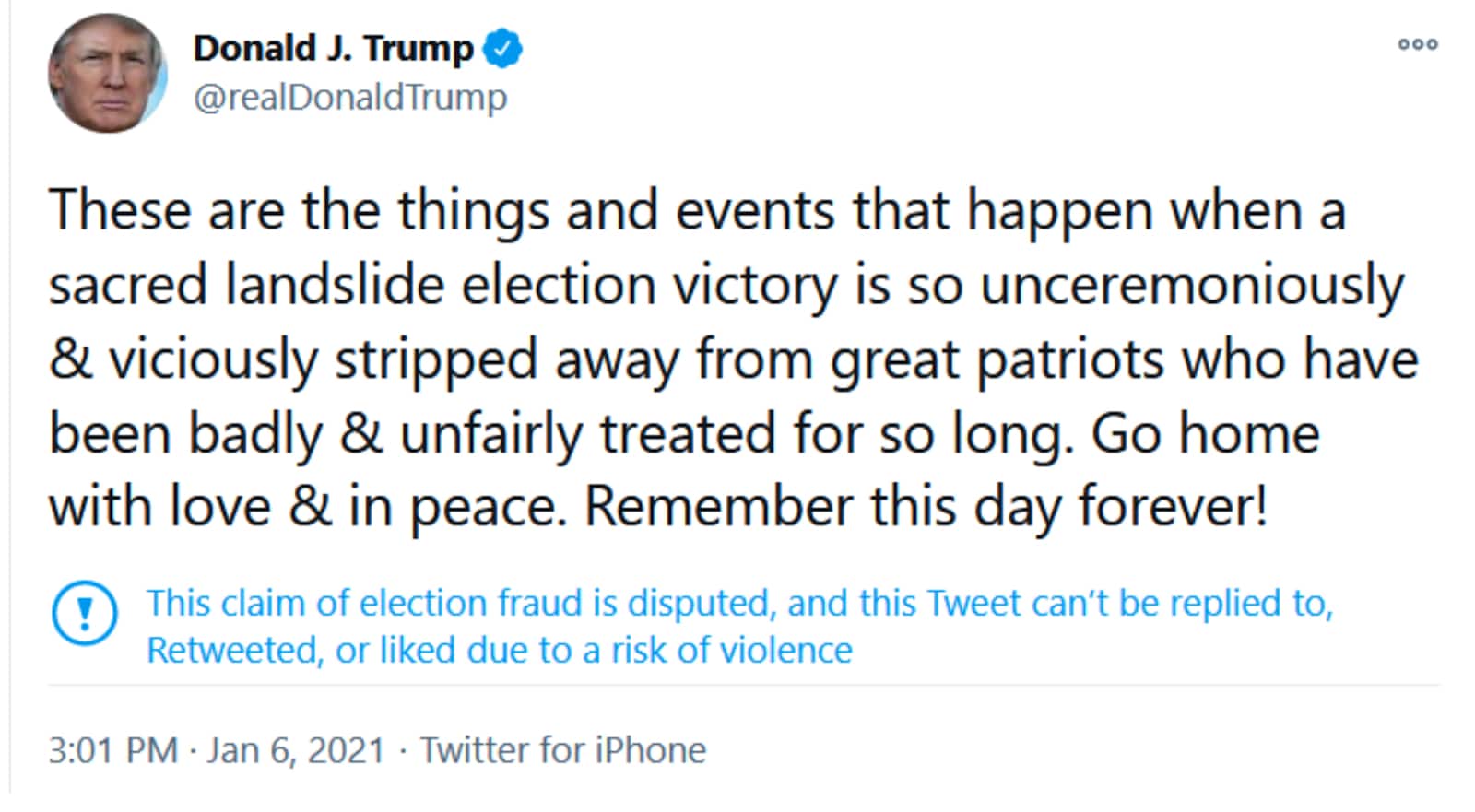 “On a day which should be a reaffirmation of one of the most important democratic ideals, the peaceful transition of power stemming from a free and fair election, we saw actions that are the antithesis of those ideals. Beyond the physical damage to our Capitol and the attacks on public servants, these were destructive acts against our shared principles and beliefs,” Ford Chairman Bill Ford and CEO Jim Farley said in a joint statement sent to TheDetroitBureau.com.

“There are no easy lessons to learn from this moment. It is clear that there will be more difficult days ahead as our country tries to overcome the things that challenge and divide us: a public health crisis, the lack of faith in public institutions, and a fractured sense of what we value as Americans.

“These problems can and must be resolved,” the two executives stressed.

(Trump attacks Ford after it agrees to a clean car deal with California.)

After a roughly eight-hour delay, during which rioters ransacked the offices of some lawmakers, including House Speaker Nancy Pelosi, the counting of the Electoral College votes resumed.