GM – its Detroit headquarters shown here – is now the #2 automaker in China.

After targeting Ford Motor Co. a week ago, Pres. Donald Trump turned his Twitter feed on General Motors overnight, demanding it move its extensive manufacturing operations in China “back to America.”

The tweet follows the president’s recent proclamation “hereby” ordering American companies operating in China to move their production operations back to the United States, a demand that legal experts question has any real weight.

Considering the extent of GM’s operations in China, where it is the second-largest automaker in the world’s largest automotive market, the impact would be substantial, were CEO Mary Barra to follow up on the president’s demand, analysts cautioned. It could effectively transform GM into a bit player in the Chinese market, fueling further growth by rivals as diverse as Volkswagen and local Chinese automakers like Geely and BYD.

“General Motors, which was once the Giant of Detroit, is now one of the smallest auto manufacturers there,” Trump said in an overnight tweet. “They moved major plants to China, BEFORE I CAME INTO OFFICE. This was done despite the saving help given them by the USA. Now they should start moving back to America again?”

(Trump attacks Ford after it agrees to a clean car deal with California. Click Here for the full story.)

Pres. Trump has repeatedly targeted U.S. automakers since his campaign for the White House.

There is no question that GM has downsized since it was forced into Chapter 11 a decade ago. The company that emerged from bankruptcy had shed dozens of parts and assembly plants and slashed its workforce. Last November, GM announced it would close another three North American assembly plants – two in the U.S. – as well as two parts plants, while trimming both its blue and white-collar workforce.

A recent report by the Bloomberg news service showed that the automaker now employs fewer union workers in the U.S. than Detroit rivals Ford or Fiat Chrysler Automobiles. At its peak, four decades ago, the company employeed 618,000 workers represented by the United Auto Workers Union. That is now down to around 46,000.

That said, GM has also invested billions of dollars in the U.S. in recent years, in June alone announcing it will spend $4.2 billion on plants in Texas, Michigan, Indiana and Ohio. Bloomberg reported that investments in the U.S. since the bankruptcy have come to $23 billion. 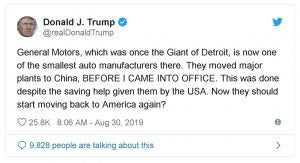 But there is no question the carmaker has placed some of its biggest investments in China where it opened up its first plant two decades ago, becoming one of the first foreign car manufacturers to enter what was then a sleepy automotive backwater. Though the Chinese market has declined this year, it remains significantly larger than the U.S. and GM sells more cars there than in its home market, 43% of its global total.

If anything, the Chinese market has become still more significant to GM in recent years following the company’s sell-off of its European Opel-Vauxhall subsidiary. It also abandoned the Russian and Indian markets, along with South Africa. So, while still active in Latin America, parts of Africa and the rest of Asia, GM is today a largely two market company: North America and China.

“The number one loss to GM, if forced to leave China, is the loss of all the future growth potential,” said Jon Gabrielsen, a market analyst who advises automakers and suppliers. Take China out, he added, and “GM would essentially be almost only a North American company.”

What GM would move back is unclear. It’s not like the automaker is using China as a major export base to the United States, where its sales and market share have dropped sharply since its bankruptcy. Currently, it only imports one Chinese-made vehicle into the States, a relatively modest-selling Buick SUV. The automaker could, of course, try to use the U.S. as a manufacturing base to then ship cars into the Chinese market, but it would face significant tariffs that would drive up costs and make its products far less competitive – especially in light of the ongoing U.S.-Chinese trade war that this month saw China increase duties on American-made vehicles.

(Trump says no tariffs on China – for now. Click Here for the story.)

If it were to pull out, it likely would simply sell its existing Chinese factories to partners such as Shanghai-based SAIC. They could continue operating the facilities and pocket all the profits, rather than sharing them with their U.S. partner. Alternatively, by leaving the market, GM might wind up ceding its significant sales and market share to rivals, such as Volkswagen – the number one manufacturer in China – as well as local players like Geely and BYD, helping fuel their own ambitions to go global.

As for future growth potential, the U.S. currently also is in an automotive sales slump that J.D. Powers and others estimate could last several years. Even after a recovery, growth opportunities are considered modest. China, on the other hand, could see sales grow by tens of millions over the next couple decades, according to analysts like veteran Asian expert Michael Dunne.

The Detroit automaker declined to comment on Trump’s new tweets, the latest in a series of attacks on GM that began during the 2016 presidential election campaign when he also called the automaker out for investing in Mexico.