Competitive chief picks up gauntlet thrown down by Lucid.

Tesla CEO Elon Musk must be feeling the pressure to keep up with the Joneses, or in this case Lucid CEO Peter Rawlinson plus the armada of automakers readying new electric vehicles, as he cut the price on the Model S — for the second time this week.

“The gauntlet has been thrown down! The prophecy will be fulfilled. Model S price changes to $69,420,” Musk proclaimed in a tweet Wednesday afternoon. The new price, in addition to reinforcing his love of the number 420, is in response to the price for the base model Lucid Air.

The potential Tesla fighter’s entry-level battery-electric sedan is priced at $77,400; however, it will be eligible for the federal government’s $7,500 EV tax credit, dropping the price to $69,900. The pricing for the four trim levels of the Air were revealed Wednesday morning, and marked the second time Musk’s looked to one-up the current top competitor.

For nearly two months, Rawlinson, a former top Tesla executive who left to start Lucid, and his company’s first product have enjoyed the spotlight. The Phoenix-based company’s Air set new standards for range – 517 miles – and performance with a 0-to-60 mph time of just 2.5 seconds. He expanded on that with a video showing the Air racing through the quarter mile in a time of 9.9 seconds, adding it was actually a little faster than that.

If nothing else, Musk is competitive. During the company’s Battery Day event, he revealed the Model S Plaid with a range of 520 miles and a 0-to-60 time of less than 2 seconds and a quarter-mile time of just 9 seconds — with prices starting at $134,490 with orders being taken immediately. Deliveries are expected to begin in “late 2021.”

Lucid’s base model sedan is expected to deliver an EPA-estimated range of 406 miles on a charge. The Tesla Model S logs in with an EPA-rated range of 402 miles per charge.

Earlier this week, Musk cut the price of the Model S by $3,000, or 4%, a move some observers believe designed to prop up sales as a growing list of competitors enters the battery-electric vehicle market.

The Model S Long Range was set to start at $71,990 in the U.S. after the first price change Tuesday. Tesla announced a similar reduction in China, where last month it also trimmed the price of the Model 3 sedan by 8%, with a base version now starting at $36,805.

Although Lucid seems to be a direct competitor, Tesla is facing a potential onslaught of competitors that have been scrambling to catch up to the California-based EV maker that is currently the segment leader in sales. 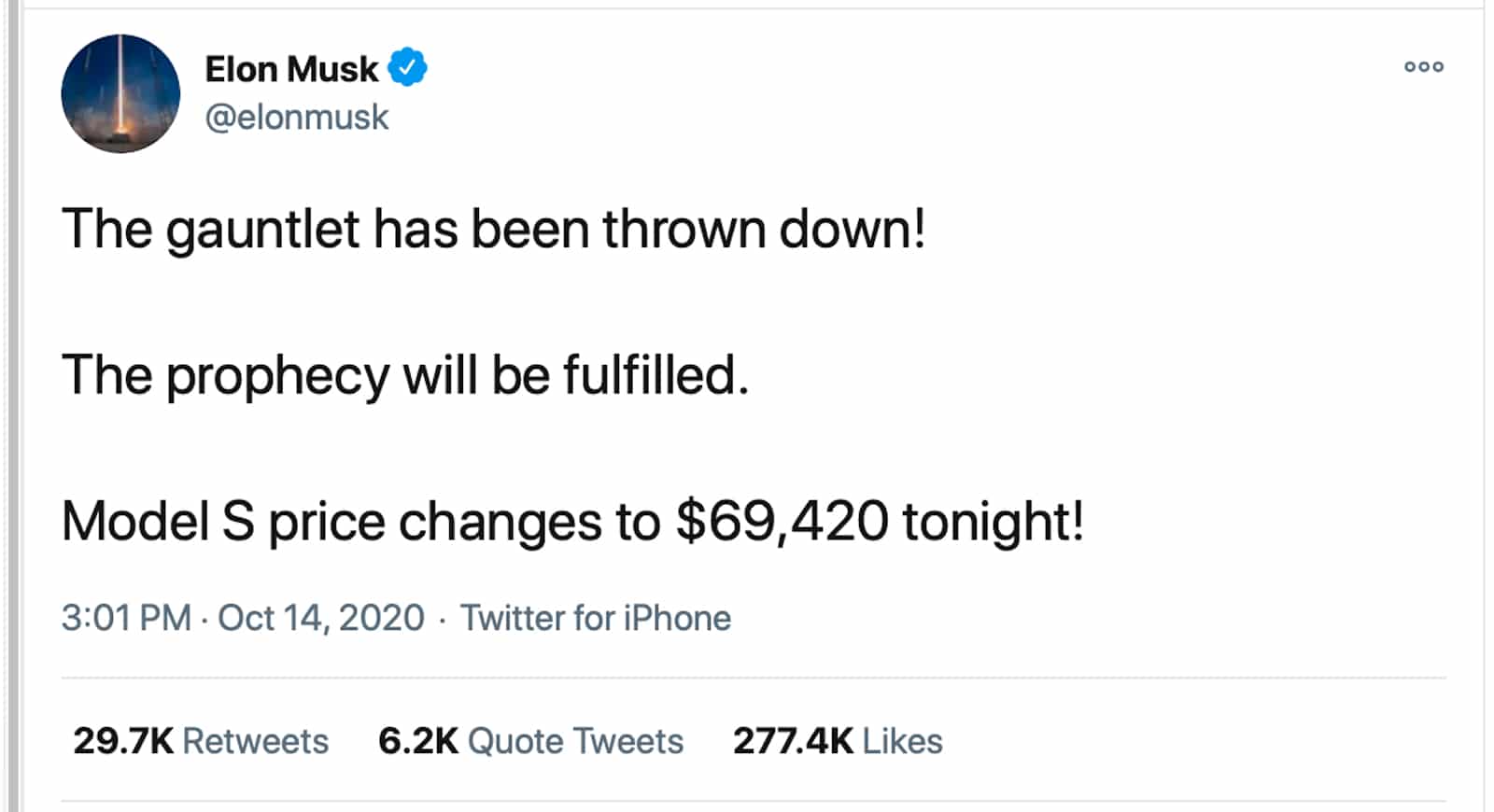 Ford, Volkswagen, Mercedes-Benz, Hyundai, Volvo/Polestar, Porsche and General Motors are just some of the established players that have invested billions in recent years into their electric vehicle development plans, some of which already have EVs on the road with more coming in the next 12-24 months. That doesn’t account for startups like Fisker, Rivian and Lordstown set to roll out vehicles starting next spring.

The initial price cut was not only viewed as a hedge against the oncoming horde, but also as a way to perhaps drum up a few more sales to help Tesla meet its 2020 delivery goal of 500,000 vehicles. The company set a record in the third quarter with 139,300 vehicles — a new record. In total, Tesla’s delivered 318,687 vehicles through the first three quarters, meaning the company will need to set another new record of 181,313 vehicles to hit the target, which is about a 30% increase compared with last quarter.

In recent years, Tesla’s sprinted to the finish line each year with the fourth quarter being its strongest. Tesla delivered 112,095 cars compared to the 95,356 and 97,186 in the second and third quarters last year.

(Tesla speaking truth about its power at Battery Day.)

The push to get to 500K would likely require two things: a newfound efficiency increase and some sacrifice on the part of workers.