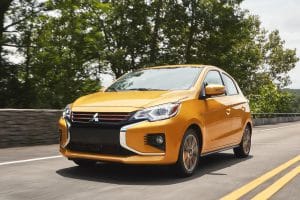 Mitsubishi Motors is launching an updated line-up for 2021 and an all-new Outback for 2022.

Mitsubishi’s on-again, off-again presence in the U.S. appears to be in “on-again” mode with the Japanese automaker revealing its plans for the expansion of its line-up for the 2021 model year.

The company plans to launch three “considerably revised” 2021 vehicles: Outlander, Mirage and Eclipse. The Outlander and Mirage have two options in the portfolio. Early next year, the company will roll out an all-new Outlander as a 2022 model.

The updates on new product come just a month after the company suggested it might scale back its presence in North America, and specifically the U.S. This despite 2019 being what then-CEO Fred Diaz described in January as “a year of great success and growth at MMNA.” Diaz was replaced by Yoichi Yokozawa in late March.

(Mitsubishi may scale back U.S. presence.)

So despite the cautious approach for the U.S., the company is updating its three-vehicle group for 2021. This next round of vehicles will get additional standard features for the whole group, with key standard active safety features appearing on all vehicles, will underpin the revisions.

The 2021 Outlander Sport will hit showrooms this fall with the new plug-in hybrid model following a few months later. The Sport is Mitsubishi’s best-selling model in the U.S., so the company isn’t making too many changes for the next model year.

The hybrid will get an updated gas engine for 2021 and bigger horsepower numbers as well. The company also noted it will be able to travel farther in all-electric mode without applying any actual numbers or estimates to the promises.

The Mirage and Mirage G4 will get extensive exterior makeovers for 2021. The company touts it as the “most fuel efficient non-hybrid gasoline-fueled vehicle” in the U.S. With the new-look wrapper, the company is hoping to combine that with a higher level of standard safety equipment to get more potential entry-level buyers to take a look.

Like the rest of the three-car line-up, the redesigned Eclipse Cross gets major front and rear design changes for 2021, taking cues from Mitsubishi’s next-generation design language. The Eclipse Cross will sport a fresh new look, revised interior and new infotainment system.

The company’s best-selling Outlook is going to get a bigger redo for the 2022 model year. And even though the 2021 version will come out this fall, the plans call for the updated iteration to hit dealers in the second quarter of 2021.

Officials describe the 2022 model as “bigger, bolder and better than ever before, and will be the quietest and best-equipped Mitsubishi ever sold in the U.S.” Not surprisingly, the outside will be “completely redesigned” to “incorporate the latest Mitsubishi design language, with a bold, aggressive and distinctive appearance.”

The 2022 version will come with more technology and also get a significant revision of its interior. The big reveal will come sometime during the first quarter of next year, officials noted. The company’s push to update products, regardless of the number, is in stark contrast to its past in the U.S. when it was one of the hot import brands in the 1980s and 1990s.

However, Mitsubishi’s fortunes began to fall apart as the new millennium approached. In the U.S., the automaker’s fixation on volume led it to launch a series of programs targeting young buyers who otherwise might not have had the resources to buy a new vehicle. The program, which postponed car payments for as much as a year, did generate sales but a significant number of customers handed back the keys when it was time to start coughing up cash.

Other bloopers pushed Mitsubishi deeper and deeper into a hole to the point that it faced collapse had Nissan not come up with a bailout bid in 2016.