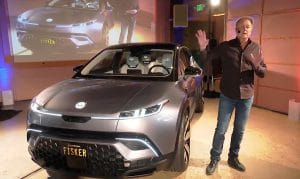 Fisker Inc. Chairman and CEO Henrik Fisker secured $50 million in new investment, which will get the Ocean EV into production.

The California-based EV startup Fisker Inc. locked down $50 million in hedge fund money this week, an investment the company says should help it take its Ocean SUV from concept to production by 2022.

Located in suburban Los Angeles, the company is the second effort by long-time Danish car designer Henrik Fisker to challenge Tesla. His original firm, Fisker Automotive, had a spectacular burnout after launching the flawed Karma plug-in hybrid, going bankrupt in 2013. The Ocean would be Fisker’s first fully electric product line.

“We are radically challenging the conventional industry thinking about developing and selling cars,” Fisker said in a statement. “This capital will allow us to execute our planned timeline to start producing vehicles in 2022.”

Soon after Fisker Automotive went bankrupt – its assets being snapped by China’s Wanxiang Group in 2014 – Henrik Fisker began talking about a comeback. In November 2016 he began teasing plans for an all-new, all-electric model dubbed the eMotion.

Henrik Fisker’s newest electric vehicle entry, the Ocean, should make its debut in 2022.

There were plenty of skeptics, especially when it was announced that the concept was to use a futuristic supercapacitor, rather than conventional batteries, and deliver range of 400 miles.

Fisker subsequently abandoned that idea, acknowledging such technology is nowhere near ready for production. The start-up also shifted away from the sedan design of the eMotion, opting instead for an SUV body that fits into current U.S. market trends.

The new model, named the Fisker Ocean, made its formal debut at the Consumer Electronics Show in Las Vegas last January. Comparable in size to the Chevrolet Equinox, it adopts the latest approach to EV design, moving  battery pack, motors and other key drivetrain components into a skateboard-like platform. That lets the electric SUV recapture some of the space where an engine normally would go to add more room for passengers and cargo.

(By the numbers: Fisker offers plenty of specs on the all-electric Ocean SUV.)

The standard battery pack is planned to hold 80 kilowatt-hours and the company expects a range of around 300 miles. It has not said what other battery pack options might be offered. Tesla now offers range of up to 400 miles with the latest version of its Model S sedan.

While the Fisker Ocean has received generally favorable, if somewhat skeptical, media coverage, the big question has been how the company would get it built. 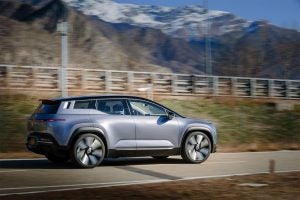 The new Fisker Ocean features something called California mode, where the rear window rolls down.

The new, $50 million investment could thus prove critical. The money comes from long-time hedge fund manager Louis Bacon through his Moore Strategic Ventures LLC. According to a report by Automotive News, that service has set a value of more than $1.6 billion for Fisker Inc.

Even with the new investment, it remains unclear whether the start-up has the funding to get its new SUV into production. Considering a traditional automotive assembly plant can run upwards of $1 billion, the $50 million is quite literally a drop in the Ocean.

Along with announcing the news of the new funding, the automaker announced it has brought on Burkhard Huhnke, a former Volkswagen Group executive, as its new chief technology officer. Fisker, who earlier in his career served as a designer for BMW, Ford and Aston Martin, will remain CEO.