Fisker Ready to Take the Ocean EV Off Road 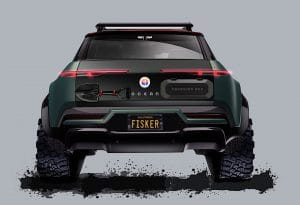 Fisker’s showing off an adventure concept of its soon-to-arrive Ocean EV with knobby tires, a roof rack, shovel and charging box on the tailgate.

Battery-electric vehicles are being touted as the answer to many problems, but they also have a few shortcomings — one of them being their off-road capability. However, Danish auto designer and entrepreneur Henrik Fisker may have an answer for that.

The Ocean is Fisker’s latest electric vehicle concept-turned-real-world vehicle. It’s due to begin production next year, and while there have been plenty of photos and accounts of the prototype, it appears the ambitious Dane isn’t just waiting for production to begin before looking at other ways the ute might be imagined.

(By the numbers: Fisker offers plenty of specs on the all-electric Ocean SUV.) 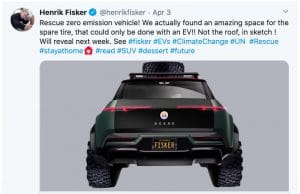 Fisker himself tweeted out the new iterations of the ute, which looks a little wider than the current version of Ocean. Actually, it looks a lot like a Subaru Outback in the pics, one of which, the Rescue concept, has the spare tire mounted on the roof because “there’s no room for it in the trunk or the frunk.”

The Ocean rescue concept rides on knobby tires – the reason for extra wide body – to give it that go-anywhere capability. Fisker’s adventure version features the same roof rack, albeit sans spare tire, and a shovel and charging box on the tailgate.

In that tweet, Fisker writes he’s “found an amazing space for the spare tire, that could only be done with an EV!! Not the roof, in sketch! Will reveal next week.”

Fisker spoke with Britain’s Top Gear magazine, telling editors, “The low center of gravity and wide track brings added stability and makes the Fisker Ocean a perfect clean sustainable utility vehicle, that can be used by international organisations, which needs to deploy rescue vehicles in rural areas, it can also be used as a zero emission military version to transport military personnel, as oil is one of the largest expenses for the military.” 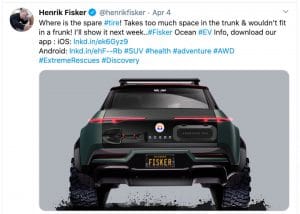 The Ocean concepts are among the first concepts showing that EVs aren’t tiny little city cars. Audi revealed the AI:Trail quattro battery-electric, autonomous EV for the Frankfurt Motor Show last fall. Also GM’s new GMC Hummer, the original version was based on the military’s Humvee go-anywhere-do-anything vehicles, is set to debut in May and may be ready to show off some off-road capability — in addition to its 1,000 horsepower.

In the meantime, the Ocean, starting with a base version, is priced at $37,499. The base model uses a single electric motor powering the rear wheels. All other versions will have twin motors providing through-the-road all-wheel-drive.

The AWD package makes 225 kilowatts, or 302 horsepower, and the company plans to reveal an “ultra-high-performance” version next year that promises to launch from 0 to 60 in less than 3 seconds. The standard battery pack is 80 kilowatt-hours and the company expects range of around 300 miles, though the final EPA numbers won’t be released until later this year.