Uber Eats Calls Out Black-Owned Restaurants in the U.S. and Canada 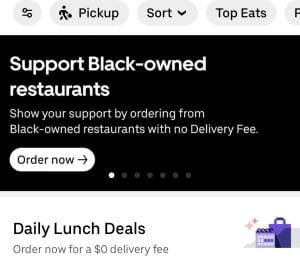 Ride-hailing service Uber Technologies is reaching out to potential customers of its Uber Eats food delivery service in a bid to connect them with local black-owned restaurants.

The Uber Eats app and web pages now highlight such restaurants in the U.S. and Canada and customers who order from one of them will pay no delivery fees from now until the end of 2020.

Black-owned businesses, in general, have long struggled. Data suggest they face greater challenges raising capital, particularly in the form of bank loans, and may face other obstacles such as insurance redlining. The African-American community has been especially hard hit by the coronavirus pandemic, with higher infection and fatality rates than other ethnic groups. And the broad shelter-in-place orders that have impacted most of America have proven a far more difficult for black businesses to pull through. 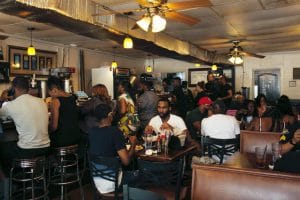 Uber Eats is looking to partner with black-owned restaurants, hoping to generate more business for both.

A number of efforts have been launched to offer support for the estimated 2.6 million black-owned businesses, Uber focusing specifically on the restaurants with its Uber Eats service.

Customers using the service’s smartphone app or going to its website in the U.S. and Canada will see a new banner reading, “Support Black-owned restaurants,” with a list of nearby options. As with other restaurants, the service also lists their menus and prices.

But the normal delivery fees will be waived through the end of this year, Khosrowshahi said in a Thursday e-mail that was sent out to Uber Eats customers in the two countries.

Additionally, the ride-hailing side of the company plans to offer discounts on rides to all black-owned businesses impacted by the coronavirus pandemic.

Uber said it does not compile racial information when signing up restaurants for its food delivery service but used a variety of sources to identify those it now serves. It will allow businesses to opt out, if they wish, or recommend additional restaurants for inclusion. 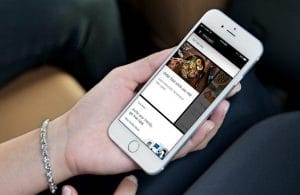 Uber also donated $1 million to the Equal Justice Initiative, as well as the Center for Policing Equity.

In his e-mail, the Uber CEO announced additional steps that will include a $1 million donation to the Equal Justice Initiative, as well as the Center for Policing Equity.

Separately, Khosrowshahi said Uber will move to improve the diversity within Uber which, as of 2019, saw whites make up 45% of its workforce, with 33% Asian, 9% black and 8% Hispanic.

“As a company, we believe that everyone has the right to move freely, no matter where they live or the color of their skin,” the Uber CEO wrote. “We’re proud of how Uber has helped improve transportation equity over the last decade. But the reality remains that Black Americans often don’t feel safe to move freely in many places around our country. And they still face enormous barriers that others do not.”

Since the murder of George Floyd during an arrest in Minneapolis, the nation has seen a wave of protests in cities across the country. It has also seen a broad level of introspection at both personal, community and corporate levels, with many business leaders openly talking about the need to diversify employment bases, address systemic inequality and to support black-owned businesses.

A number of those efforts are focused on black restaurants. “Across the country, restaurant critics, writers, and local food lovers have been pulling together extensive lists highlighting Black-owned businesses in their respective cities,” notes a story on the website of food magazine Bon Apetit.

You can click here to go to the Bon Apetit story which itself has links to lists of black-owned restaurants in cities across the U.S.

Separately, a search of Google, simply using the search term, “black-owned restaurants”, will pull up your local establishments.