Workers taking time off without pay. 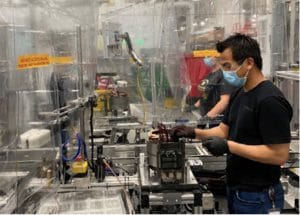 Tesla is allowing workers who are concerned about their health to wait until May 31 to return without pay.

Tesla CEO Elon Musk was chomping at the bit to get back into the company’s Fremont, California plant after some shelter-in-place mandates were loosened in California; however, it appears that not all of his employees shared that enthusiasm.

Musk’s almost militant attitude toward Alameda County officials who were unwilling to allow him, initially, to reopen the plant hasn’t transferred to Tesla employees who are uncomfortable returning to work during the pandemic.

The EV makers is permitting workers at its U.S. car and battery plants to take unpaid leave through the end of the month if they’re wary of returning to work, according to an internal memo, Bloomberg News reported.

Tesla CEO Elon Musk told authorities they could find him working on the line at the Fremont plant, but asked that they arrest only him.

Tesla informed its employees about the policy in the memo from Valerie Capers Workman, Tesla’s head of North American human resources. Workers concerned about exposing at-risk family members can sign and submit a document to take leave until May 31, Bloomberg News reported.

However, those who the company or a doctor have put under quarantine, have COVID-19 symptoms or already tested positive for the coronavirus are not subject to the policy, Capers Workman said. Her memo applied to workers at the company’s plants in California and Nevada.

The company restarted May 11 with Musk telling local health officials that if they didn’t like it, they could find him working on the line with his employees, asking that they only arrest him. The company filed for injunctive relief May 9 claiming county’s order to remain closed conflicted with the state’s order. 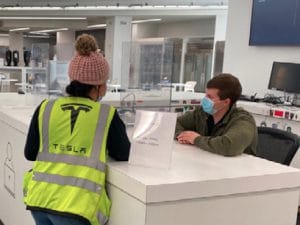 Tesla is implementing new practices at its facility similar to those of other automakers.

The two sides negotiated a settlement of sorts, and the company restarted with the approval of county health officials on a limited basis May 13. Since then, the company has been cleared to resume full production, Musk told employees after the county approved its safety protocols. The company withdrew its lawsuit Wednesday for the injunction.

The delay in allowing Tesla to reopen stemmed from county health officials wanting manufacturers to delay operations by at least another week to monitor infection and hospitalization rates, making sure they didn’t rise.

Tesla on May 9 released its plan to keep workers safe, with the precautions and efforts mirroring those of other automakers that were also planning to reopen plants during that time frame, including General Motors, Ford and Fiat Chrysler. Hyundai and Kia had already restarted its U.S. plants the previous week.

Since then Fiat Chrysler and Ford have had breaks in protocol that have allowed COVID-positive employees to enter plants and potentially infect other workers. Ford saw its Dearborn Truck Plant just west of Detroit temporarily shut down after workers expressed concern for their safety. The plant resumed operations later that evening.

Thanks for subscribing! Please check your email for further instructions.
Tagged with: Tesla lets workers sit until May 31 | Tesla plant workers | Tesla workers waiting until May 31 | tesla news | thedetroitbureau.com