“If anyone is arrested, I ask that it only be me," said CEO Musk.

Waiting for the sheriff? Musk could be arrested for defying a county order blocking the reopening of the Fremont plant.

Defying an order from county officials, Elon Musk on Monday ordered the Tesla assembly plant in Fremont, California to resume operations, the automaker’s CEO saying he is ready to be arrested – though Alameda County officials said they are negotiating a deal that could allow Tesla to move forward.

The frequently controversial billionaire was an early skeptic of the potential damage that could be caused by the coronavirus and, even as the U.S. death toll has surged, Musk has remained outspoken in his opposition to lockdowns and plant closings that he has dubbed “fascist.” The Fremont plant initially remained open despite a regional shelter-in-place order until sheriff’s deputies forced its closure.

Tesla delayed a reopening in April but then ordered workers back after California Gov. Gavin gave manufacturers the greenlight to resume production. But Newsom said he would defer to individual county officials and those in Alameda said Monday they had not received a satisfactory plan from Tesla ensuring worker health and safety once the factory were to reopen.

Over the weekend, the electric carmaker filed a federal lawsuit against the county. At the same time, Musk tweeted threats that indicated he would be willing to close all California operations and move to Texas or another state.

A Model 3 sedan outside the Fremont plant.

On Monday, he announced the company was “restarting production today against Alameda County rules,” adding that he would be at the Fremont plant, “on the line with everyone else.”

Musk also reacted to the possibility that he could run afoul of the law, tweeting, “If anyone is arrested, I ask that it only be me.”

The county decided to avoid an immediate confrontation, officials issuing their own statement later in the day saying they are negotiating with Tesla to come up with a working plan for the factory.

“We continue to move closer to an agreed upon safety plan for reopening beyond Minimum Basic Operations by working through steps that Tesla has agreed to adopt,” the statement from the Alameda County Public Health Department said. “These steps include improving employee health screening procedures and engaging front-line staff on their concerns and feedback regarding safety protocols.” 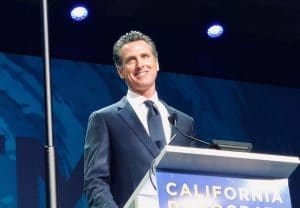 California Governor Gavin Newsom appears to be stepping in to try to ease the confrontation.

According to the county, Tesla has not yet provided the sort of extensively detailed plan needed to ensure minimum risk of COVID-19 infections among the thousands of workers at the Fremont facility. Other automakers have provided extensive playbooks, most sharing similar “best-practice” guidelines that include moves to keep workers at least six feet apart, wherever possible, the use of masks and other personal protection equipment and even the redesign of common areas like cafeterias and lavatories.

Tesla has not publicly indicated what steps have been taken at Freemont.

Despite Musk’s frequent outbursts, California officials have received widespread praise for the steps taken over the past several months to hold back on COVID-19 infections which fell far short of the outbreaks seen in places like Michigan and New York.

Gov. Newsom, nonetheless, faced heavy pressures from Tesla and other businesses to allow reopenings. He told reporters on Monday that he had spoken to Musk “days ago” about getting Fremont back up and running, but Newsom also stressed that the final decision is a matter of “county-led enforcement.” Oklahoma is one of several states hoping to take advantage of the confrontation and lure in Tesla.

In a sign that the state’s highest elected official might be trying to push through a compromise, Musk subsequently tweeted, “Thank you Governor Newsom.”

Tesla has received backing from a number of corners in its bid to reopen its only U.S. assembly plant – which is the only remaining large vehicle assembly plant in the state of California.

Among those backing Tesla was Mike Jackson, the CEO of AutoNation, the country’s largest automotive retail chain. Though a frequent critic of Musk and the EV maker’s policy of only selling cars at company-owned stores, Jackson told CNBC that, “I would go so far as to say, I support Elon Musk. Tesla should open.”

Also backing the Tesla CEO was U.S. Treasury Sec. Steve Mnuchin, who also told the network, “He’s one of the biggest employers and manufacturers in California, and California should prioritize doing whatever they need to do to solve those health issues so that he can open quickly or they’re going to find, as he’s threatened, he’s moving his production to a different state.”

The potential hit to California could be significant. Early this month, during a call to discuss Tesla’s first-quarter earnings, CEO Musk confirmed that an announcement could be coming within a month about plans for a second Tesla factory in the U.S. He suggested California and Texas were primary possibilities. But Musk now said the carmaker not only might locate the new plant elsewhere but even move its headquarters and the Fremont operation out of California.

That reportedly triggered a flurry of contacts from officials in a number of states not only including Texas and Nevada – the latter the site of the Tesla Gigafactory battery plant –but also Utah, Georgia and Oklahoma.

The Sooner state’s Gov. Kevin Stitt said in a tweet aimed at Musk, “Oklahoma is open for business.”

(Toyota expects N.American production to be down a third from April through October due to pandemic, economic meltdown.)