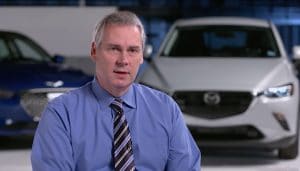 For decades, the automotive industry lived by the adage, “safety doesn’t sell.” How times have changed. Today, picking a safe vehicle – especially one with the latest high-tech hardware onboard – has become the new mantra for most buyers.

And the Insurance Institute for Highway Safety is making the process of finding the right vehicle a bit easier with the release of ratings for the 2020 model-year. A total of 64 different cars, trucks and utility vehicles scored some form of award, 23 scoring the IIHS Top Safety Pick+ imprimatur.

The organization relies on a lengthy evaluation process that includes the classic process of controlled crash tests. But, as it has been doing during the past several decades, the IIHS has been adding new tests targeting real-world concerns, while also putting increased emphasis on the benefits of new technology.

This year, for example, automakers were rated on the performance of their headlights, said IIHS President David Harkey. “Finding vehicles with the right headlights can be a challenge for consumers. We wanted to reward automakers that have removed this obstacle.” 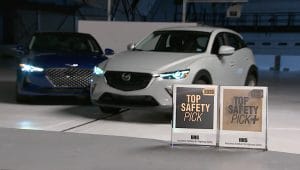 Hyundai and Mazda were big winners in the 2020 Top Safety Pick awards.

In a statement announcing the new awards, the IIHS added that “Good visibility is key to avoiding crashes in the dark. In the time it takes a driver to react to an obstacle under ideal conditions — 1.5 seconds — a car traveling 55 mph covers about 120 feet.

The Institute also focused on some of the new advanced driver assistance systems that are becoming ever more commonplace. And not only were IIHS researchers looking for forward collision warning systems with automatic emergency braking, or AEB, but they wanted to see manufacturers offer the ability to detect and, if necessary, stop for pedestrians, as well.

That has become especially important because of the spike the U.S. has seen in pedestrian fatalities in recent years, Harkey emphasized. An estimated 6,200 American pedestrians were killed in vehicle collisions in 2018, the most recent year for which data is available. That was a 4% increase from the year before. 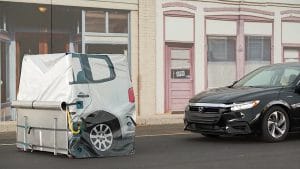 To gain the IIHS’ top safety ranking, a vehicle must achieve the top results in a number of tests.

In years past, the IIHS would expand the list of test criteria and then give manufacturers time to react before making those new tests essential to winning Top Safety Pick and Top Safety Pick awards. This year, the group noted, it decided to move quickly, factoring in pedestrian protection just a year after beginning to test it.

So, the vehicles that won awards this year, the IIHS explained, “must be rated Good or Acceptable across all trim levels and packages, and it must offer front crash prevention systems that score well in the agency’s tests of vehicle-to-vehicle and vehicle-to-pedestrian crash prevention.”

As for the 64 vehicles that won awards this year, Hyundai Motor Group topped the chart with 14 through its Hyundai, Kia and Genesis brands.

(Exterior Airbags Could Save Lives of Passengers and Pedestrians.)

Mazda had the most models, five in all, taking Top Safety Pick+ awards, Subaru following with four.

Of the major auto brands, neither Mitsubishi nor Fiat Chrysler took a single award. And the list of vehicles included no minivans or pickups because of a lack of pedestrian detection technology.