Alexa comes along for the ride. 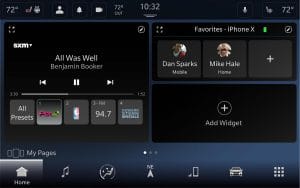 In today’s high-tech automotive world, horsepower is taking a back seat to processing power for many new car buyers. And, by that measure, the new Uconnect 5 infotainment system Fiat Chrysler is launching is the digital equivalent of the Dodge Hellcat.

One of the first onboard infotainment systems, Uconnect has gone through a series of updates throughout the years, adding such things as voice control and, more recently Apple CarPlay and Android Auto. The latest, fifth-generation technology gets an all-but complete makeover adding still more features, while also adopting a much-needed upgrade to its user interface.

Easily the most significant change can be measured using numbers that geeks, rather than traditional gearheads, would recognize. FCA claims that the underlying Android automotive operating system now runs at 50,000 MIPS, or millions of instructions per second. Growing to 6 gigabytes of RAM and 64 GB of flash memory. For those who don’t speak tech, you can summarize the payoff this way: the system is a full five times as fast as Uconnect 4, meaning there’s virtually none of the annoying lag after tapping an icon or issuing a voice command.

Speed alone doesn’t make computer-based technology easy – or fun – to work with, however. Beyond plugging in newer, faster processing hardware, the Uconnect development team took some interesting steps to improve the actual interface. For one thing, it hired specialists in what is known as the Human-Machine Interface, or HMI, from Carnegie Mellon University. It also brought computer gamers onto the team. 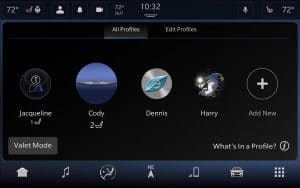 The new Uconnect 5 allows for personalized user profiles, and lets two phones be connected at the same time.

Among the things they recognized was that, “Today’s consumer wants an experience that seamlessly blends (their) online and offline world,” said Bryant Mazurek, the head of Uconnect marketing.

The reality is that more and more Americans interact with digital technology pretty much everywhere they go. That may begin when a voice assistant rings the morning alarm and delivers the daily weather report while we’re still in bed. And, along with our smartphones, technologies like the Google Assistant and Amazon Echo can even control our lights and thermostats and, well, pretty much anything we program them for.

So, among other things, Amazon’s Alexa voice assistant now becomes part of Uconnect 5. It will operate the thousands of familiar “skills,” including turning up the thermostat as you head home, turn on the lights and open the garage, as well as playing streaming music while you’re still in the car. That includes the new Sirius XM 360L service and Pandora.

Uconnect 5, meanwhile, will display all sorts of other smartphone-based apps on its screen using CarPlay or Android Auto. In fact, the new system can pair and remain connected to two phones simultaneously – and either by wire or wirelessly. That will let you switch back-and-forth between them. Dueling smartphones, if you wish.

As to those screens, there are a variety of different sizes and shapes in different FCA vehicles, including the laptop computer-sized vertical display in the Ram pickup. The system adapts to each of them. And, just as importantly, it allows a motorist to customize the layout on the screen to reflect their own personal tastes.

Visually, the Uconnect touch screen now boasts higher resolution than the 4K television you likely have at home – about three times higher detail than the old system. Meanwhile, those gamers and HMI specialists have revised what you see to make things more elegant, as well as easier to recognize and maneuver around.

FCA has also adopted the TomTom navigation technology which is both more visually appealing and more intuitive than the old system. It also addresses one of the real weaknesses of traditional onboard navi hardware: out-of-date maps. The new Uconnect system allows for over-the-air updates that can bring in map changes while also allowing FCA to revise and even replace existing hardware. 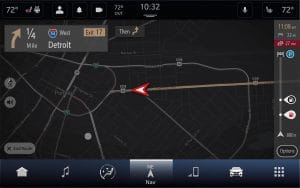 The new UConnect 5 uses TomTom navigation and updates its maps over the air.

The system relies on a 4G telecomm connection. Officials hinted that they’re preparing to migrate to 5G once it becomes widely available. They wouldn’t say when that might happen, nor whether 4G systems will be able to be updated. That almost certainly would require swapping out hardware, however.

The current 4G LTE system will allow up to eight smartphones, tablets and other devices to connect to the Internet. FCA will offer a three month complementary subscription for that feature, while there’ll be a one-year subscription to other Uconnect functions.

Look for the new Uconnect system to debut on the Ram 1500 and then migrate through the rest of the carmaker’s line-up.