As expected, lawyers for Fiat Chrysler Automobiles have filed a motion asking a federal judge to dismiss a racketeering lawsuit brought against the automaker by rival General Motors.

GM filed its lawsuit in November claiming that FCA executives had bribed officials of the United Auto Workers to put GM at a labor-cost disadvantage.

FCA lawyers in the briefs filed the U.S. District Court in Detroit said, “GM’s claims, however, bear no resemblance to what Congress had in mind in enacting RICO.”

(FCA getting ready to ask court to dismiss GM lawsuit)

GM patched together a case built on documents pulled from an ongoing federal investigation into corruption in the UAW, which has led to the resignation of the union’s president and the indictment of several union officers and officials.

GM alleged in a lawsuit that Fiat Chrysler cost the company billions of dollars, gaining an unfair competitive advantage by bribing UAW officials.

The federal investigation, which began four years ago, also uncovered criminal activity by former FCA employees, who were dismissed for violating company policy. Alphons Iacobelli, FCA’s former vice president of labor relations is currently serving a prison sentence for his role in the scandal.

Neither GM’s lawsuit nor the union scandal are expected to derail FCA’s merger with PSA.

FCA’s answer to the GM complaint said, “Rather than plausibly alleging that the UAW is a criminal enterprise controlled by FCA, GM focuses on goods and services obtained by certain former UAW employees with assistance from certain former FCA employees, which allegedly constituted “prohibited payments” under the federal Labor Management Relations Act.

“But no matter how often GM refers to indictments and plea agreements, there is nothing in the Complaint that ties the alleged prohibited payments to negotiation of collective bargaining agreements between GM and the UAW—much less the outcome of such negotiations, which supposedly put GM at some competitive disadvantage vis-à-vis FCA. In other words, GM’s own complaint establishes only that it is at most a mere bystander with regard to the alleged prohibited payments.” 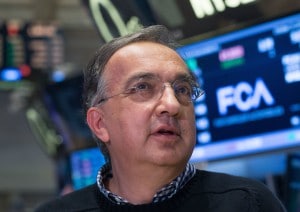 That alone is fatal to GM’s claims. The Supreme Court has directed courts to be skeptical of RICO “claims brought by economic competitors, which, if left unchecked, could blur the line between RICO and the antitrust laws,” they added.

FCA GM fails to adequately show any “racketeering activity” allegedly engaged in by FCA were the “but for” and “proximate” cause of GM’s claimed injuries, as required to state a RICO claim.

GM’s theory of the case stating that FCA sought to force a merger with GM by making concessions to the UAW during negotiation of the 2015 collective bargaining agreement — which harmed FCA itself —knowing that the UAW would extract those same concessions from GM through so-called “pattern bargaining” is flawed and illogical on its face, FCA’s lawyers said.

GM’s RICO claim also fails for the additional reason that GM does not plausibly allege that FCA acquired an interest in, or maintained control of, the UAW.

Alphons Iacobelli, right, was previously sentenced to 5.5 years in prison for his role in the FCA-UAW training fund scandal, including paying off the mortgage of UAW VP General Holiefield, left. Holiefield died before the scandal broke.

Such skepticism is warranted here, where GM contends that “$1.5 million” in alleged prohibited payments somehow “inflicted billions of dollars of damages on GM” in the form of higher labor costs.

“We are confident in the legal and factual underpinnings of our case,” GM said in a statement.

(FCA hit with series of class-action lawsuits over bribery charges)

GM is expected to file a more complete answer to FCA’s motion within 60 days and judge could rules next summer on whether to grant FCA’s motion to dismiss the case or allow it to proceed to the “discovery” phase.