A worthy entry into an increasingly crowded market. 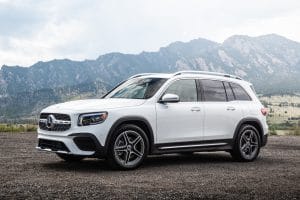 The 2020 Mercedes-Benz GLB 250 still features a boxier exterior style other makers are moving from.

Gone are the days when automakers tried to make their car-based crossovers look like conventionally boxy SUVs. The industry trend has been to opt for ever more swoopy shapes that attempt to overcome the inherent design limitations of two-box vehicles.

So, imagine our surprise upon getting a first good look at the new 2020 Mercedes-Benz GLB 250. It’s unabashedly retro in the sense that it proudly opts for a classic, upright and boxy shape, in sharp contrast to the smaller Mercedes GLA and bigger GLC.

That was just one of the surprises, though. Another was the fact that the German automaker managed to find yet another bit of white space between those two crossovers to fit in the new GLB. That said, we headed out to Arizona to take our first drive with a healthy dose of skepticism – but coming away with admiration for what Mercedes had accomplished.

With a surprising affordable starting price of just $37,595, the 2020 Mercedes GLB should be a serious option for those on a relatively modest budget who nonetheless want a luxury utility vehicle that is both fun to drive and functional. There’s even an optional three-row package for those who need to squeeze in a passel of kids. And that boxy shape then proves to be a real advantage by not compromising the GLB’s cargo compartment – something that happens with many of the more stylish crossovers now on the market. 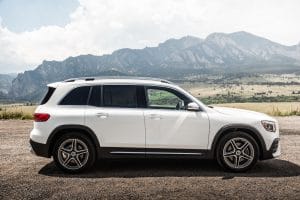 Visually, there’s no question that some folks might find the somewhat old-fashioned shape of the GLB a bit of a turnoff. But we were impressed that Mercedes was willing to go with a form-as-function approach. In fact, it’s quite surprising how much room – including headroom – it managed to squeeze into the package. At 111.4 inches, it helps that the crossover’s wheelbase is about five inches longer than that of the base GLA, and only about two inches less than the GLC. To put things into perspective, the cargo area can hold 10 cubic feet more than the bigger GLC.

Inside, it’s all Mercedes, with a lavishly appointed cabin that doesn’t make one feel like they’ve compromised to meet that reasonable price tag. One of the cooler features is an ambient lighting system that can be adjusted to offer any number of different colors.

Consider all the various standard features offered by the GLB. On the outside, that includes 18-inch wheels and LED headlamps, as well as a power liftgate. Inside, there’s keyless start, a dual climate control system, powered eight-way front seats, a 7-inch reconfigurable gauge cluster and matching touchscreen infotainment system. The latter is offered not only with Apple CarPlay and Android Auto but the new Mercedes-Benz user interface, MBUX.

This is one of our few quibbles. The system is handsome to look with and is definitely a step up from classic voice control interfaces. You can tell it to find an address in all manner of ways, much as you would talking to another human. But don’t expect MBUX to be the automotive equivalent of the Amazon Alexa or Google Assistant. We couldn’t get it to tell us what town we were driving through or any manner of other question those other voice assistants could readily handle. We’re hoping future upgrades will take the system the next step. 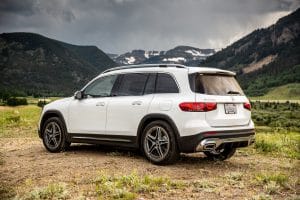 The GLB offers more cargo space than the even larger GLC.

One other disappointment related to the infotainment system was the decision by Mercedes to abandon the rotary knob featured on the old COMAND technology. There’s a touchpad that can make do, but it’s simply not as effective when trying to do things like zooming in on the navi screen.

Under the hood, the GLB 250 is offered with a single powertrain package, a 2.0-liter turbo-four making 221 horsepower and 258 pound-feet of torque. While no rocket, it provides plenty of acceleration for the overall package, launching the compact crossover from 0-60 mph in 6.9 seconds, according to Mercedes. Top speed is 130 mph.

The engine is paired with a seven-speed dual-clutch transmission that is, under most conditions, almost seamless in operation. We did notice that, in sport mode, it had a tendency to hold shifts a little longer than expected, however.

The base car sends power to the front wheels, much like the Mercedes GLA. Under hard acceleration we found power could overwhelm the tires and introduce a bit of torque steer, to boot. All that vanished with the exceedingly well-mannered all-wheel-drive package, our strong recommendation for potential GLB buyers. 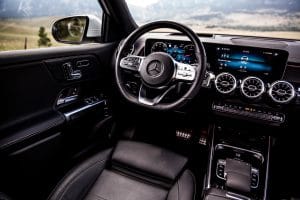 The interior of the new GLB features the MBUX infotainment system.

Meanwhile, though the 2020 Mercedes GLB might look like a classic SUV, it revealed surprisingly car-like on-road manners. Steering proved direct and precise, with just the right amount of road feel. The suspension soaked up most of the bumps we experienced on back roads leading up to hip Sedona. The $990 adaptive damping package is something we would strongly recommend.

Other key options expand what is, to start, a long list of advanced driver assistance systems. On the whole, they are some of the best on the market and should provide particular comfort to parents using the GLB as a family hauler. Our one complain here is the lane-keeping system which uses break intervention if you start to drift across the line. It can be harsh and unexpected, rather than smooth and intuitive.

The list of options is, as you might expect of Mercedes, quite extensive. That even includes an off-road package featuring, among other things, hill descent control.

Overall, there are plenty of ways to tune this package to your particular needs, and that should pvoe enticing to potential buyers looking for a reasonably affordable luxury crossover.

Sure, there are a few annoyances, but the 2020 Mercedes-Benz GLB is, for the money, a worthy new entrant into an increasingly crowded market segment.