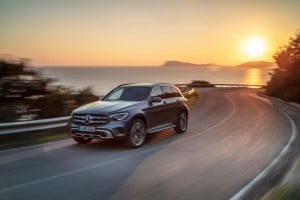 The new Mercedes-Benz GLC will now be offered in a variety of configurations, including plug-in 350e, as well as an AMG edition.

Long skeptical of battery power, few automakers have reversed course so abruptly as Daimler AG, its luxury arm in particular.

Among the assortment of new, electrified vehicles it will bring to the Frankfurt Motor Show this week will be the third-generation version of the Mercedes-Benz 350e 4Matic EQ Power plug-in hybrid.

Along with its updated, design, the new PHEV will get a larger, 13.5 kilowatt-hour lithium-ion battery pack that will allow it to deliver significantly more range, an estimated 28 to 30 miles per charge according to the European NEDC test cycle. While U.S. numbers haven’t been released yet that suggested it could double the current GLC 350e’s anemic 10 miles of all-electric range.

Daimler’s premier luxury brand has been pushing hard into battery-electric space over the last several years. The Frankfurt show will see it introduce, among other things, an all-electric show car that is widely expected to tease a production version that would play in the same, rarified air as the familiar brand flagship, the S-Class.

Meanwhile, the automaker recently started rolling out its first production long-range battery-electric vehicle, the EQC crossover. And an array of additional models will follow from a program in which the automaker is investing about 11 billion euros, or $12.1 billion. 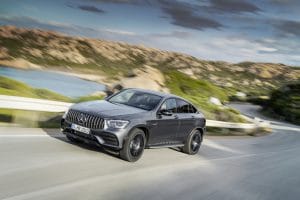 But Mercedes is hedging its bets. While battery technology is improving rapidly – with longer range, faster charging and lower costs enhancing its potential appeal – the carmaker is playing it safe by also emphasizing plug-ins. The advantage is that they can handle local chores and commutes in pure electric mode but shift to gas power when their batteries run down. Mercedes now offers nearly a dozen plug-in hybrid models, the original GLC being one of its first.

(Audi to unveil its own battery-car concept in Frankfurt. Click Here to find out more about it.)

From a visual point of view, the German automaker set out to make the new GLC look a bit more sporty. Both standard LED headlights and taillights have been updated to make them seem more aggressive, while there are changes to the front and rear fascias, as well.

The big news inside the cabin is the updated infotainment system. The 2020 Mercedes-Benz GLC now comes with a 10.25-inch, landscape-oriented screen. And, in keeping with the brand’s general direction, traditional, analog gauges now can be upgraded to a 12.3-inch digital display. 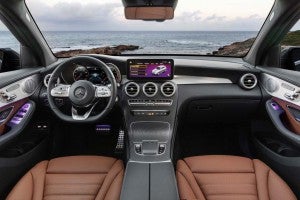 The German automaker was an early entrant into the infotainment field with its original COMAND system. It revealed a major shift in direction in January 2018 when it unveiled the MBUX system at the annual Consumer Electronics Show in Las Vegas. The system essentially marries an Amazon Alexa-style voice assistant with the COMAND system, allowing a motorist to operate functions with plain English, rather than often obscure, commands. It even lets a user search for destinations by coming up with three descriptive words.

Critically, Mercedes said, it designed the latest GLC line specifically to allow it to fit in the larger battery without gobbling up passenger or cargo space. Among other things, it uses a lowered rear axle and revised shell so, “The result is a large, level luggage compartment which is only just below
that of other GLCs.”

Meanwhile, the hybrid drivetrain has also been upgraded to increase both range and performance. The 2.0-liter gas engine and single electric motor produce a combined 315 horsepower and 516 pound-feet of torque. Because electric motors develop maximum torque all but instantly, the new SUVs 0-60 time has dropped to just 5.6 seconds.

U.S. range, fuel economy and pricing will be announced closer to the American on-sale date during the first half of 2020, the company said.