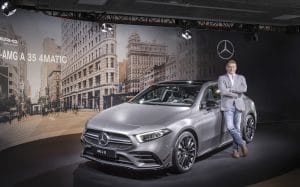 Dietmar Exler, president & CEO, Mercedes-Benz USA, after his presentation at what may have been the company’s last appearance at NYIAS.

Mercedes-Benz has been steadily withdrawing from participating in auto shows around the world, the latest being the 2020 New York International Auto Show in April.

Now New York joins Detroit and Chicago on the list of major North American shows the German automaker has bailed out of in the past few years. The company did participate in the recently concluded Los Angeles show.

However, according to Automotive News, the company isn’t guaranteeing its attendance at the 2020 event next fall. The company has participated fully in the European slate of shows: Paris, Geneva and Frankfurt.

Its move to drop NYIAS isn’t entirely shocking as much of the industry has been scaling back its participating in auto shows, preferring to spend the millions of dollars involved in massive showfloor displays into other forms of marketing to buyers directly.

Like most shows, officials are hoping the move is temporary. 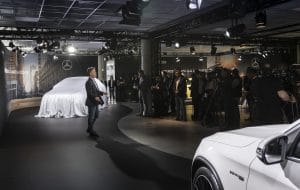 The announcement comes to light on the same day that Mercedes’ parent company, Daimler AG, plans to cut 10,000 jobs during the next three years, looking to cut costs as it invests heavily in the development and debut of electric vehicles.

Plans laid out by Daimler in November showed the company aimed to cut staff costs by around 1.4 billion euros or $1.54 billion by the end of 2022.

Daimler has repeatedly cut its profit outlook over recent months, partly to cover a regulatory crackdown on diesel emissions but also because of a slowing auto market.

(Mercedes announces “next chapter” in electrification at Frankfurt)

Group operating profit will be “significantly lower” than a year ago, the company said last month. Other measures to reduce staffing costs include offering shorter working weeks.