Prize goes to 2 U.S., one Japanese scientists for creating "a rechargeable world." 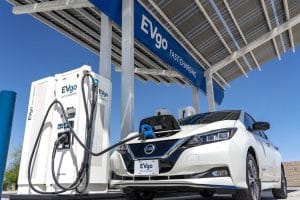 Nowhere is the “revolution” created by lithium-ion technology set to have a bigger impact than in the auto industry.

The Nobel Prize in Chemistry has gone to three scientists who collectively were responsible for “the development of lithium ion batteries,” technology that has transformed everything from handheld appliances to mobile phones and, increasingly, allowed electric vehicles to begin replacing conventional gas and diesel-powered vehicles.

The honorees are John B. Goodenough of the University of Texas, M. Stanley Whittingham of the State University of New York at Binghamton, and Akira Yoshino of Meijo University in Japan.

“Lithium-ion batteries have revolutionized our world,” the Nobel committee in a statement, Goran Hansson, the secretary general of the Royal Swedish Academy of Sciences, which oversees the award, adding that the three scientists helped create “a rechargeable world.”

Italian physicist Alessandro Volta built what is generally credited as being the first electrochemical battery in 1800 – though the word, “battery” was first coined by Benjamin Franklin a half-century earlier. 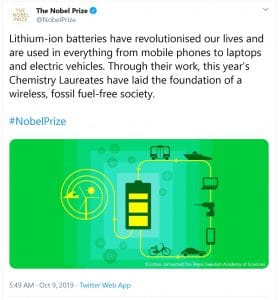 From an automotive perspective, batteries had already become a promising technology by the early 1900s when it was a matter of debate whether vehicles would be driven by steam, gasoline or electricity. Henry Ford’s wife preferred driving an electric, in fact, and the industry pioneer turned to his close friend Thomas Edison to see if he could come up with a better battery that could overcome limits on range, charging times and cost.

But those remained critical drawbacks for nearly the next century. When General Motors introduced the EV1, the first battery-electric vehicle from a major manufacturer, in 1996, it managed barely 50 miles per charge.

Automakers tried a series of newer chemistries, including nickel-cadmium, nickel-metal hydride and sodium-sulfur, but each had their own problems. The sodium-sulfur battery delivered a reasonable improvement in range, but the chemistry had to be kept at several hundred degrees. If it cooled off it would “brick,” and then have to be scrapped.

The breakthrough came with what was widely dubbed the “next-generation” battery, one using any of a variety of different chemical mixtures collectively known as “lithium-ion.

The three Nobel Prize winners worked independently, building upon each other’s work with what was then a relatively unknown technology. Whittingham first saw a way to use lithium in a battery, though it was unstable and prone to catch fire and even explode.

Goodenough updated the chemistry, increasing the amount of energy it could store.

But the real breakthrough came out of Japan where Yoshino discovered ways to combine lithium with other chemicals, including iron, magnesium and cobalt, to not only further increase energy storage but also make the resulting compound more stable. His work allowed the first lithium-ion battery to go into commercial production in 1985.

The market for the technology is expected to grow at a compound annual rate of 10% or more and top $100 billion by 2025, according to Adroit Market Research, a figure echoed by other studies. 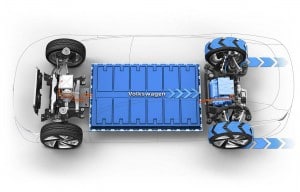 Lithium batteries “have truly revolutionized the world,” said Sam Abuelsamid, a principal researcher with Navigant Research, “not only the cars many people now drive but the smartphones you and I are talking on.”

Without the technology, Abuelsaid added, batteries simply wouldn’t be able to deliver the range, performance and other attributes needed to meet the expectations of the millions of drivers around the world who have already bought electric vehicles. That said, he cautioned that lithium-ion chemistry still is “orders of magnitude” less efficient at storing energy than liquid fuels like gasoline.

The race is on to come up with even more effective and efficient batteries. Much of the money being invested in the hunt is going towards the development of “solid state” batteries. They are expected to not only hold more energy and charge faster, but also be less prone to catching fire, a problem that automakers like Tesla have faced on a number of occasions.

How soon a next-gen battery will be ready for commercial use is far from certain. Some proponents contend solid-state technology will start going into automotive applications by mid-decade, others saying it is likely more than a decade off. But researchers continue to improve lithium-ion enough that General Motors President Mark Reuss in June forecast that battery-cars will reach cost parity with gas-powered vehicles “sooner” than many had forecast.

The improvements, to date, have made it possible for a number of countries, including Norway, Denmark and even India to consider outright bans on gas and diesel vehicles that could go into effect in the not-too-distant future. From an automotive perspective, it seems, the future really could be “a rechargeable world.”

Goodenough, Whittingham and Yoshino will formally receive their Nobel gold medals and diplomas at a ceremony in Stockholm on Dec. 10. They also will share a cash award of 9 million Swedish kroners, or $910,000.