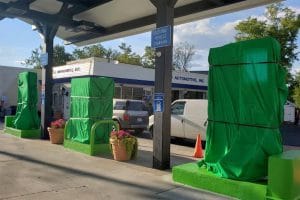 A Maryland gas station owner believes the future is now and swaps his gas pumps for EV chargers.

The lack of public charging stations is often cited as one of the key reasons why American motorists have been reluctant to switch from gas to battery-powered vehicles. But that excuse may not hold up much longer as it becomes both easier and cheaper to plug in, whether at home or on the road.

That was underscored by the news that a service station in Takoma Park, Maryland, has become the country’s first to completely replace its gas pumps with high-speed chargers. Thousands of quick-charge locations are either already open or in the planning stages, according to companies like EVgo, Chargepoint and Electrify America.

At the same time, home charging systems are becoming both faster and less expensive, Audi among the automakers that have teamed up with Amazon to allow buyers of plug-based vehicles to both purchase a charger and schedule installation all at the same time.

Takoma Park’s RS Automotive was just one of the tens of thousands of traditional gas stations dotting the American landscape until owner Depeswar Doley decided he didn’t want to continue dealing with the hassles of working with petroleum distributors. So, with some encouragement from the city’s public works manager – and his 17-year-old daughter – Doley decided to pull out the pumps and plug in a new set of fast chargers. 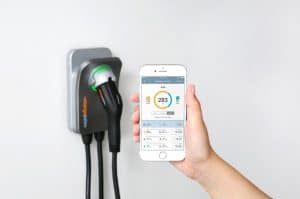 Home charging is the most common method for charging a vehicle.

The good news for the businessman is that Takoma Park’s current pair of public chargers are always busy. But, considering there are a grand total of just 21,000 EVs registered in Maryland, “It’s not something that I expect to become rich overnight, or something like that, but it’s a good cause [and] good for the environment,” Doley told CNBC.

It helped, of course, that he got $786,000 in grants from the Electric Vehicle Institute and the Maryland Energy Administration to help cover the costs of the changeover.

Each of RS Automotive’s chargers will have a maximum capacity of 200 kilowatts, or four times the capacity of first-generation Level 3 quick-chargers. While only a handful of vehicles can draw that much current, more are on the way, including the new Porsche Taycan which will be able to get an 80% top-off from a depleted battery in around 20-30 minutes.

While the Maryland station is believed to be the first in the U.S. to completely switch from gasoline to electric, other service stations are adding quick-chargers and still more ground-up charging stations are being built across the country. Major roadways are a primary target for companies like Chargepoint and EVgo. Several recently opened along the Ohio Turnpike, for example. But others 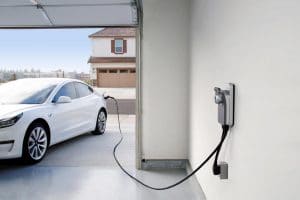 Chargepoint now offers a fast charger for home including installation on Amazon.

are going into places where EV owners are likely to congregate. Electrify America, the start-up funded by a $2 billion settlement from Volkswagen’s diesel emissions scandal, is putting hundreds in at WalMart store lots.

One of the pluses of owning a plug-based vehicle is the ability to charge at home, something that 80% of current EV owners do on a regular basis, according to industry data. As a result, “You won’t need nearly as many (public) charging stations as you have gas stations today,” Pasquale Romano, CEO of Chargepoint, told TheDetroitBureau.com.

Early home chargers were expensive but prices are falling, even as the devices become faster and more versatile. The new Chargepoint Home Flex system, for example, can deliver up to 50 amps of power at 240 volts. While not close to matching the range-restoring capacity of a public quick-charger, the Home Flex can add up to 37 miles per hour, ensuring all but the longest-range EVs will have a full battery after being plugged in overnight.

At $699, the Home Flex is a bit more than the also-new $499 system offered by Electrify America, though it offers faster charging for those who can tap a 50-amp circuit. The Chargepoint and Electrify America devices can be purchased through Amazon – like Audi’s home charger – which will handle installation at the same time.

The U.S. is by no means the only market where public chargers are fast rolling out. In China, the government and commercial charging ventures are installing thousands of public stations, a critical step in backing up Beijing’s New Energy Vehicle mandate. By 2025, regulators are calling for sales of around 5 million plug-based vehicles annually, 20% of overall automotive sales. 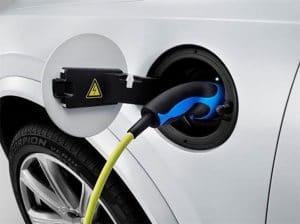 Using a fast charger, most EVs can get an 80% charge very quickly.

Perhaps no country is pushing harder to set up a charging infrastructure than Norway, however, and for good reason, considering EVs currently account for around half of all new vehicle sales.

Like Maryland’s RS Automotive, Oslo’s Circle K station yanked out all of its gas pumps this summer, replacing them with chargers.

“We’re in a new era. It is a historic milestone that the gas station chains replace fossil fuel pumps with quick chargers. We congratulate Circle K for investing properly in electric cars,” said Christina Bu, secretary general of the Norwegian Electric Car Association, in a press release. “Soon we will see that more and more petrol and diesel pumps are being replaced by fast chargers and gas stations are becoming energy stations.”