Five million of the 10M sold in the last 10 years. 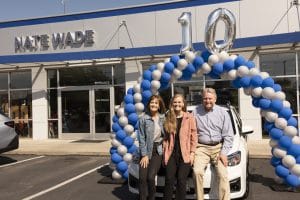 Subaru’s sales in America have been explosive for the last five years with the Japanese brand breaking record after record during that time. The company recently hit a new milestone: It sold its 10-millionth vehicle in the U.S.

The company, which has been selling vehicles in the U.S. for a little more than 50 years, but the last 10 years have been the difference maker.

“It took us 41 years to achieve our first 5 million sales, and just over 10 years to achieve the next five million,” said Thomas J. Doll, president and CEO, Subaru of America. “Accomplishing this milestone reflects our commitment to providing customers with vehicles made to the highest standards of safety, reliability and dependability.”

How well has it been going? Even during a less than stellar year, Subaru of America reported 70,039 vehicle sales for August 2019, a 9.3% increase compared with the year-ago period. Last month was also the automaker’s best sales month in the history of the company.

In the meantime, 10 million vehicles is quite an impressive feat. So that vehicle is likely to be preserved by the automaker, right? Wrong. It’s a Subaru, and people drive them not look at them on some sort of pedestal.

The 10-millionth vehicle is a 2019 Impreza and was sold by Nate Wade Subaru in Salt Lake City, Utah. It was purchased by Craig Harmon, a repeat Subaru customer, who got the car for his daughter, Rachel. While he has owned seven other Subies, his purchase experience this time was probably a little different than past experiences.

When he pulled into the parking lot, the dealership was decorated for a celebration with a balloon arch and a restored 360 was parked next to the new Impreza. The 360 is a microcar and was the first vehicle the company sold in America, with 332 of them finding homes in U.S. garages.

Additionally, he was greeted by the dealership’s owner, Kirk Schneider, and several other staff members.

“My family and I drive Subaru vehicles for their proven history of safety and reliability and performance in inclement weather,” said Harmon. “We only have one problem with Subaru: the vehicles last too long!

Harmon’s family has been doing its part to help the company grow. In addition to the strong results this year, on Sept. 4, Subaru of America reported its 93rd consecutive month of year-over-year sales increases and best-ever sales month. The company expects to sell more than 700,000 units.

August marked the 66th consecutive month of 40,000+ vehicle sales for the automaker. Crosstrek and Ascent sales were notably strong as each model achieved its best August ever. Crosstrek posted a 33.3% increase, while Ascent posted a 72.8% increase compared to August 2018. Forester achieved an increase of 10.6% over the same month a year ago.