Automakers are constantly fighting to keep their customers they’ve conquested from competitors while keeping their long-time fans too. For 2019, Subaru and Lexus appear the best as they’ve captured the top spots in the 2019 J.D. Power Brand Loyalty Index.

Brand loyalty is a key objective of automakers not only because of the repeat business I brings, but also those customers are likely to give that brand a recommendation to friends and family.

“Customer loyalty is perhaps the most important metric for manufacturers because it incorporates many factors that lead customers to become brand ambassadors,” said Tyson Jominy, vice president of Data & Analytics at J.D. Power. 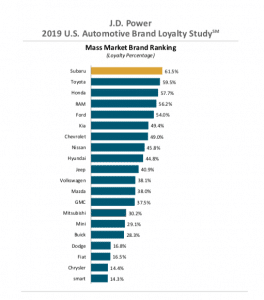 ants to Replace Rather than Repair Vehicles)

“When a brand can connect emotionally with owners through the vehicle’s content, capabilities or prestige level, owners are much more likely to come back and purchase that same brand again.”

Using data from the Power Information Network, the study calculates whether an owner purchased the same brand after trading in an existing vehicle on a new vehicle purchase or lease.

Customer loyalty is based on the percentage of vehicle owners who choose the same brand when trading in or purchasing their next vehicle. 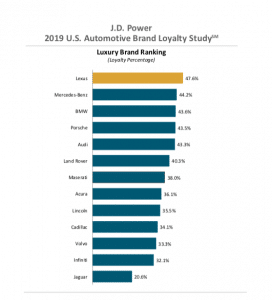 The rest of the mass-market top five included Toyota, Honda, Ram and Ford.

The luxury top five was rounded out by Mercedes-Benz, BMW, Porsche and Audi. In the overall ranking, Lexus, the luxury leader, would have finished seventh.

While Ram took finished in the top five of the mass market brands, the rest of its FCA siblings finished at the bottom of the rankings saved only by Smart, which finished dead last overall with just 14.3% coming back to the Daimler-owned brand.