Civic and HR-V diesel to bite the dust as Honda closes British plant. 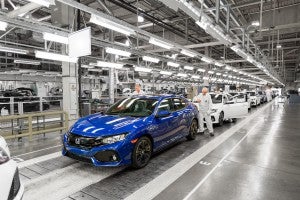 The Swindon facility will stop producing Civic diesels for Europe by 2021.

Honda is the latest automaker to say its doing away with diesel-powered cars in Europe. The Japanese automaker will phase out all diesel cars by 2021 in favor of models with electric propulsion systems.

The company plans to electrify all of its European cars by 2025. The shift has been necessitated by the falling demand for diesels largely driven by ever-toughening emissions standards.

By next year, according to European Union emission targets, carbon dioxide must be cut to 95 gram per km for 95% of cars from the current 120.5 gram average. That number, according to Reuters, has been on the rise as the popularity of gas-powered SUVs have overrun fuel-efficient diesels. The new figures must be met in 2021.

To meet the target, Honda will cut the diesel versions of the Civic and HR-V sport-utility vehicle from its European line-up. The move is just the latest realignment of the company’s business in Europe. In February, Honda announced it plans to close its only British car plant in 2021, cutting as many as 3,500 jobs.

Honda’s not the only automaker cutting its oil burners in Europe. Volvo made the same determination in 2017 and Volkswagen is also cutting its diesel lines in favor of battery-electrics. In fact, diesel is losing its luster around the world.

Among Japanese peers, Nissan is ending diesel engine development while Toyota has already pulled diesels from its European offerings as has Suzuki. Mazda remains committed to diesels, but even those are diesel-electric hybrids. 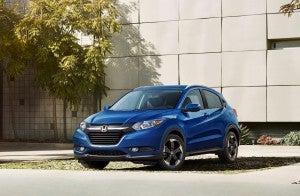 The HR-V diesel is also getting cut in Europe as the company ends diesel sales on the continent.

Japan’s No. 3 automaker has said it would cut the number of car model variations to a third of current offerings by 2025, reducing global production costs by 10% and redirecting those savings toward advanced research and development, Reuters reported.

Honda envisions hybrid or fully electric autos accounting for two-thirds of its global sales by 2030. The company plans to electrify all models sold in Europe by 2025. Diesels were once dominant across Europe for their fuel economy and durability.

However, recent shifts in attitudes about the idea of “clean” diesel has changed the climate for the engines. Some cities are already employing diesel bans in their city centers. Meanwhile, the VW diesel scandal made it nearly impossible for diesels to be viable options with the public.

(For more on Toyota and Honda earnings for Q2, Click Here.)

Diesels accounted for 36% of new-vehicle sales in the European Union last year, down from 52% in 2015, according to the European Automobile Manufacturers’ Association. Boston Consulting Group predicts that ratio will drop to 21% in 2025.