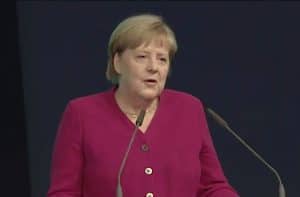 Germany’s Chancellor Angela Merkel took to the floor of the Frankfurt Motor Show today to acknowledge what many in attendance already knew: German automakers have a tough task ahead of them when it comes to climate change.

Merkel, who was touring the show, stopped to discuss the issue of climate change amidst the many electric vehicles at the event. She described the effort needed to combat the problem as “Herculean.”

Part of the issue is that the target is always moving. She noted, for example, that even as automakers were cutting the harmful emissions of motor vehicles, more and more people were buying cars.

During a tour of BMW’s booth with newly appointed CEO Oliver Zipse, an environmental protestor wearing a T-shirt bearing Greenpeace’s logo and the slogan “Climate Killer” charged Merkel, but was tackled to the floor by security guards.

There were other demonstrators at other press launches during the show, often standing on cars and holding Climate Killer posters within the sight of Merkel and auto executives. “She must clearly tell the auto bosses ‘fuel and diesel is over’,” activist Gerald Neubauer told Reuters. 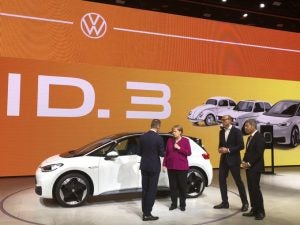 Among the complaints registered by the groups is the rising sales of larger vehicles, like crossovers and sport-utility vehicles, with bigger engines. These vehicles typically have lower fuel economy ratings than smaller sedans, coupes and even wagons, which are more popular in Europe than the U.S.

VW gets a new logo – and a new “sound logo” to usher in its new EVs. Click Here for more.)

Of course, automakers are quick to note that they are looking to provide the vehicles that consumers want, which isn’t necessarily in line with the goals of the protestors.

Bernhard Mattes, head of Germany’s automaker lobby group VDA, told the Associated Press that the industry is committed to reducing its carbon footprint, but said customers are demanding bigger, not smaller vehicles.

He’s pushing the German government to refrain from setting new, tougher emissions targets and said automakers favor capping the amount of carbon dioxide released into the atmosphere via a national or European emissions trading system. That position didn’t make him very popular at the show.

(This concept vehicle is loaded with “trailblazing innovations that could save your life. Click Here to check out the Mercedes ESF 2019.)

In fact, VDA announced Mattes plans to step down from his position at the VDA by the end of the year “to focus on other tasks.” There were no further explanations.