Some could show up soon, while others “look well into the future.” 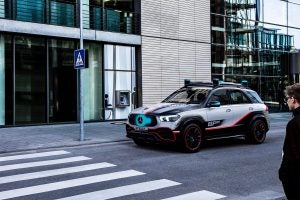 The Mercedes-Benz ESF 2019 concept can use sensors to spot danger and external signals to “talk” to other drivers and pedestrians.

At first glance, it might seem like another Mercedes-Benz midsize sport-utility vehicle, a version of the familiar GLE, but a closer look offers a number of clues that it’s something much more.

The various sensors, including arrays on the roof, reveal the SUV to be the automaker’s first advanced safety project in quite some time. Dubbed the Experimental Safety Vehicle, or ESF 2019, it incorporates an assortment of what Mercedes refers to as “trailblazing” innovations that could significantly reduce the likelihood of a crash or, if one occurs, limit the risk of injuries or death.

Some of those new technological features could show up in “near series” production, while others are meant to “look well into the future,” Mercedes officials added, ahead of the ESF 2019’s formal debut at the Frankfurt Motor Show this week.

“The new ESF 2019 reflects the mobility of the future, and presents a wide variety of innovations which we are currently researching and developing,” said Ola Källenius, chairman of the Board of Management of Daimler AG & head of Mercedes-Benz Cars. “And I can already say this much: some of the functions are very close to series production.” 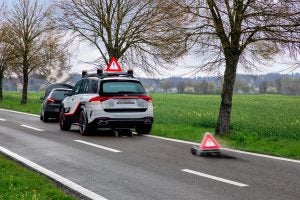 The ESF 2019 is in the process of developing several technologies that could show up on future vehicles soon.

Among the technologies we could see in various Mercedes products over the next several years are:

·       Pre-Safe Curve, a system that detects when drivers might be heading into a corner at too high a speed, warning them by lightly tightening the seatbelts;

·       Pre-Safe Child, a function that anticipates a crash and both tightens a child’s seatbelt and inflates special bags around a child seat before impact, reducing the loads that could otherwise cause injury. The system also can detect a child’s vital signs;

·       Digital Light takes the current “smart” lighting systems offered in Europe to the next level. The basic technology essentially operates full-time in bright mode, masking out light to avoid blinding oncoming traffic. Digital Light, expected to debut on the next S-Class, is even more targeted in order to reduce glare.

·       Electroluminescent paint on the outside of the vehicle can make it easier to spot when rolling through a dark intersection at night.

The interior also features rear seatbelts equipped with USB ports to encourage backseat occupants to wear their belts. And, in a crash, a new airbag design further reduces the risk that they might be injured.

As with so many other recent concept vehicles – including an all-electric S-Class alternative Mercedes plans to reveal in Geneva – the hybrid-powered ESF is designed to be driven either manually or in fully autonomous mode. 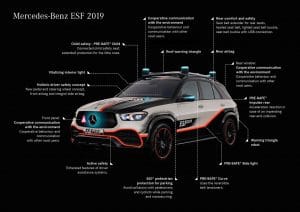 That is built into the basic design of the Experimental Safety Vehicle’s cabin, which is meant to “take into account the greater interior flexibility offered by autonomous vehicles, “explained Rodolfo Schöneburg, the head of Mercedes’s vehicle safety unit.

“The great advantage of automating driving functions is that, in the future, fewer accidents will be caused by driver error,” said Schöneburg. “However, fully automated and driverless vehicles also come up against physical limits and there will undoubtedly be mixed traffic consisting of automated and non-automated vehicles for many years.”

Among other things, “digital surfaces” on the ESF would allow a vehicle operating autonomously to communicate with human drivers and pedestrians, say, when they come together at an intersection. And the concept vehicle even features a small robot that could roll out of the vehicle’s back end in the event of a crash and then deploy a warning triangle for oncoming traffic.

The ESF 2019 is the latest in a series of safety concepts that Mercedes has rolled out during the past decade.