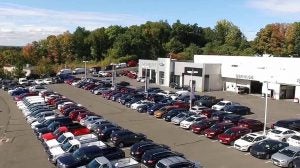 Despite interest rates falling for most of the year, the Federal Reserve appears set to cut them once again despite the concerns by some are concerned about inflation and other issues.

Weakening economic data, trade disputes, and global uncertainties, the Fed is expected to lower rates further this week. The cut, if it comes as expected, will be the second one in the last two months by the Fed. The cut in July was the first in a decade.

The expected cut will move the prime rate range to 1.75% to 2% and it expect to see it push the rates down on a variety of things, like credit cards and adjustable-rate mortgages. However, auto loans are likely to stay put.

Dealerships are facing some significant headwinds when it comes to keeping sales in the black. Lower margins have dealers searching for ways to keep a few bucks in their pocket. One of those ways is to keep the mark up on the financing, according to Outside Financial Chairman Jon Friedland.

Slowing car sales overall are forcing dealers and lenders to find ways to squeeze out profits.

“Because the average car dealership in the United States is selling fewer new cars this year than last, and selling them at lower margins, car dealers increasingly rely on the financing office to compensate. In fact, car dealers now earn more profit from financing cars than from selling cars,” he said.

Further, recent polling from auto dealers reveals they aren’t seeing favorable conditions for their businesses in the future. According to the Q3 2019 Cox Automotive Dealer Sentiment Index (CADSI), U.S. automobile dealers view the current market as negative, with an index score of 48.

(Looking for a Vehicle? The Used Car Lot May be Best Bet)

In many instances, vehicle buyers don’t even realize that dealers are marking up the financing because unlike many other industries, auto dealers are permitted to engage in predatory lending. Outside Financial has been following the markups often found in auto loans. Using its Markup Index the group has tracked the markups since 2010.

“Unfortunately for car buyers, auto dealers were specifically excluded from these regulations, even though 80% of new car financing is originated by dealers.” According to the index, through July consumers paid an average of $1,904 in undisclosed fees and markups, a 6% increase from 2018 and an 82% increase since 2010, marking a record high.

(That New Car You Want Will Be More Expensive Than Ever)

“Consumers deserve the same transparency and choice in the financing transaction as they have when price shopping for a car,” Friedland said.