In July, new vehicle sales in the U.S. ticked up slightly as buyers finally decided to take advantage of the good deals afforded them by three consecutive months of interest rate cuts by auto lenders; however, interest rates are likely as low as they’re going to get.

According to the analysts at Edmunds, the annual percentage rate on new financed vehicles averaged 5.8% in July, compared to 6% in June. These cuts paved the way for some even lower interest rate deals for those with outstanding credit.

“Rising vehicle costs and high interest rates have been placing immense pressure on the new-car market all year, so it’s nice to see shoppers get a bit of a reprieve,” said Jessica Caldwell, Edmunds’ executive director of insights.

“Consumers are still in for a bit of sticker shock if they’re coming back to the market for the first time in a few years, but the fact that interest rates are trending slightly lower is helping soften the blow.”

While the positive results in July and the latest fed rate cut may have some potential buyers thinking there might be another cut by lenders, that appear

New vehicle sales fell in June despite a strong economy.

s unlikely. Edmunds believes last month’s cut down to 5.8% came in advance of the fed’s move on July 31.

Edmunds.com analysts Auto lenders lowered interest rates on new-vehicle loans last month in anticipation of a Federal Reserve rate cut, according to Edmunds. As a result, July marked the third straight month that the average rate fell for new-vehicle financing.

Jeremy Acevedo, Edmunds’ manager of industry analysis, said the industry responded to the Fed’s decision before it happened in the belief that borrowing money would be cheaper in the coming months.

(Despite a Drop in Interest Rates by Automakers, Sales Fell in July)

“The cat was out of the bag on the rate being cut, and the amount was well thought out ahead of the meeting,” Acevedo told Automotive News.

One reason for the dip in interest rates, Caldwell suggests is that automakers and dealers were sweetening deals to clear out lingering 2018 models. Edmunds estimates 3% of new vehicles sold in July were 2018 models, the highest level of outgoing model-year sales of any July in Edmunds’ records, dating back to 2002.

“The fact that there are still 2018 models sitting on dealer lots this far into the year is pretty disconcerting, but at least we’re seeing that automakers and dealers are making a greater effort to get shoppers in the door,” said Caldwell. 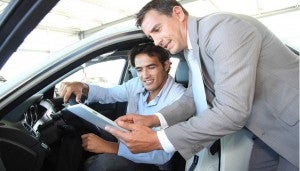 Interest rates are expected to stay in the 5% range for the rest of 2019.

Perhaps most importantly, Edmunds analysts say automakers will likely continue to offer subtle interest rate incentives during the next few months to keep the “summer selldown” momentum, but buyers still sitting on the sideline hoping for a dramatic rate cut are likely to be disappointed.

“People might hear this news and think this means buying a car just got a lot cheaper, but in reality shoppers aren’t going to see much of a difference in their car payment from a quarter percent rate cut,” said Caldwell.

(Looking for a Vehicle? The Used Car Lot May be Best Bet)

“Even with this move and automaker incentives, we expect to see average interest rates lingering in the 5% territory through the rest of the year.”