Amazon will purchase 100,000 battery-electric delivery vans from Rivian, a suburban Detroit start-up, as part of its new “Climate Pledge.”

Jeff Bezos, the online retailer’s CEO, announced the move during a Washington news conference on Thursday, outlining a broad series of steps including a pledge to make the company carbon neutral by 2040.

“We want to use our scale and our scope to lead the way,” Bezos said during a presentation at the National Press Club in Washington, D.C. “One of the things we know about Amazon as a role model for this is that it’s a difficult challenge for us because we have deep, large physical infrastructure. So, if we can do this, anyone can do this.”

The announcement helps put a frame around Amazon’s surprise announcement last February that it was the lead investor in a new, $700 million round of financing for Rivian, based in Plymouth, Michigan — $440 million of that from Amazon. That move followed the retailer’s separate investment in autonomous vehicle technology, industry observers speculating that Amazon might eventually want to eventually field its own fleet of fully driverless, zero-emissions delivery trucks to replace its dependence upon partners like UPS and the Postal Service. 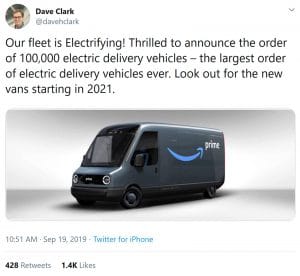 Rivian has lined up a number of big investors lately, including Ford Motor Co. which is pumping $500 million into the company. Cox Automotive announced its own, $350 million investment earlier this month.

(For more on the Cox Automotive investment in Rivian, Click Here.)

The new funding is expected to help Rivian launch production of its first two products, the electric R1T pickup and R1S sport-utility vehicle, next year.

“This investment is an important milestone for Rivian and the shift to sustainable mobility,” RJ Scaringe, Rivian’s founder and CEO said in a statement at the time, though neither he nor Amazon would discuss what projects they might have in mind.

Neither company has provided details, but Rivian officials previously told TheDetroitBureau.com that there’s significant flexibility to the skateboard-like platform underpinning both the R1S and R1T trucks, and that will likely be used for the Amazon delivery vehicles.

For the two trucks it plans to market under its own badge, the platform will hold a 180 kilowatt-hour battery that could provide more than 400 miles range. That’s far more than what other new electric delivery trucks can manage, though with a larger vehicle, a full load of cargo and lots of stops, such a large battery pack still might prove useful.

“We want to use our scale and our scope to lead the way,”said Amazon CEO Bezos, outlining a broad environmental plan for Amazon.

Amazon has already begun developing its own delivery fleet to handle its massive business. The company currently expects to ship 10 billion purchases this year.

It is likely, meanwhile, that the new trucks will be assembled at the factory Rivian purchased last year from Mitsubishi in 2018. The Japanese automaker abandoned the Normal, Illinois facility in 2015 when it ended U.S. production.

As for Bezos “Climate Pledge,” the billionaire entrepreneur said he wants to commit his company to meet its share of the Paris climate accord 10 years early. Amazon currently gets 40% of its energy from renewable sources and plans to double that by 2024, with a goal of 100% by 2030.

(Ford Investing $500M in Rivian; Will Use Start-Up’s Platform for New BEV)

Amazon also said it will make a $100 million donation to The Nature Conservancy to form the Right Now Climate Fund. It will focus on restoring and protecting forests, wetlands and peatlands globally. The company also plans to step up lobbying efforts in Washington and elsewhere to sway policies. And it will seek to encourage other companies to step up their own environmental initiatives.

Despite the new efforts, Amazon expects to have as many as 1,000 of its employees walk out on Friday as part of a one-day Global Climate Strike.

Bezos says he understands employees concerns about some Amazon policies but, during the National Press Club event, he also said he doesn’t plan to have the company’s cloud-based services subsidiary, AWS refuse to work with fossil fuel companies.