California will lose its ability to set tougher fuel economy standards than those set by Washington, two senior members of the Trump administration announced Thursday morning, proclaiming that move, along with a planned rollback of federal mileage rules, will result in safer and cleaner vehicles, while also creating more American jobs.

Andrew Wheeler, administrator of the Environmental Protection Agency, justified the actions by arguing that rules set by the Obama administration, as well as by the California Air Resources Board, would have forced the auto industry to build electric vehicles few Americans can afford, keeping older vehicles, which pollute more and are less safe, on the road longer.

During an early morning news conference, administration officials also said they hope that automakers, as well as California regulators, will support the changes. If not, they said they hope that by separating actions on mileage rules and the California waiver this will make it quicker and easier to fend off the anticipated legal challenges.

President Donald Trump has long promised to roll back the federal fuel economy standards set under the Obama administration and, in the process, eliminate the waiver given to California that allowed it to set even tougher guidelines. The mandate set by regulators at the California Air Resource Board have now been adopted by 13 other states, as well as the District of Columbia, and cover about a third of American car buyers.

Referencing to the acronym for the Corporate Average Fuel Economy standards, “CAFE does not mean California Assumes Federal Empowerment,” said Wheeler, adding that the administration believes one uniform standard is needed for the entire country.

The EPA chief stressed that the move to block California from setting greenhouse gas standards will not impact its ability to regulate other pollutants, such as ozone, adding that, “We hope the state will focus on these issues rather than trying to set fuel economy standards for the rest of the country.”

There had been some anticipation that details of the revised CAFE mandates – to be called the SAFE Vehicle program – would be announced on Thursday morning, but Department of Transportation Secretary Elaine Chao explained that final details on the mileage rules are still being worked through.

The DOT chief did say that “the updated standards will be reasonable,” and likely will not be rolled back as much as the administration had first suggested during a news conference late last year.

President Donald Trump on Wednesday weighed in on the mileage issue with a series of tweets including one in which he declared that the revised rules would make vehicles “substantially SAFER,” while also “meaning significantly mor

Wheeler and Chao repeatedly focused on those points during their joint news conference, often taking shots at electric vehicles which they insisted would deliver little benefit to the environment.

“The rule will not force automakers to spend billions of dollars to build cars that American consumers do not want to buy or drive,” said Chao.

For his part, Wheeler claimed that average American car buyers are being forced to subsidize electric vehicles that are, disproportionately, being purchased by wealthy Americans.

His key argument was that new cars and light trucks are becoming more and more expensive – Wheeler quoting an average price of $39,000 during the first quarter of 2019 – a trend that would continue under the Obama CAFE rules. That is pricing more and more U.S. motorists out of the market, the EPA director said, pointing to statistics showing the average vehicle on the road today is about 12 years old, up from 8 years in 1990.

That works counter to the goal of making vehicles safer and cleaner, he said, adding that, “By decreasing the cost of cars we will help get old cars off road and newer cars on the road.”

Whether that actually will happen as claimed is far from certain. So is the question of how the changes the administration plans will actually impact the auto industry.

“We’re not changing our strategy,” Art St. Cyr, the head of automotive operations for American Honda, told TheDetroitBureau.com on Wednesday, following the debut of the automaker’s first gas-electric SUV, the 2020 CR-V Hybrid. St. Cyr disputed the question of whether the push to electric vehicles would cost jobs, noting Honda invested $4.2 million to add production of the hybrid model at its Indiana plant, adding 34 jobs in the process. 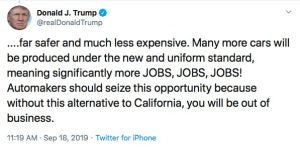 General Motors, meanwhile, proposed a $7 billion investment, most of that for production of electric vehicles, including a battery-powered pickup, as part of its initial settlement offer to the United Auto Workers Union. While the contract was rejected, and the UAW has gone on strike, the investment plan is expected to remain part of a final settlement.

Wrapping up the Thursday morning news conference, EPA’s Wheeler said he believes the final rules will win widespread support, adding, “I hope California will put politics aside and also support it.”

That seems unlikely. Even without final details of the Trump Administration’s mileage rule cuts, opponents have been weighing in with sharp criticism. And, during his own news conference on Wednesday, California’s Attorney-General Xavier Becerra made it clear the state will not readily accept losing its emissions waiver.