Toyota Charged Up About Plans for Olympic Games in Tokyo 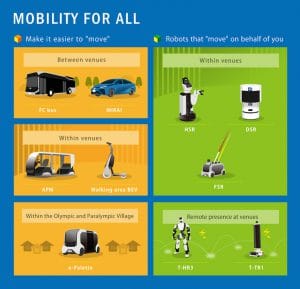 Toyota is planning to put a fleet of 3,700 low-emission vehicles into service for the Olympic games set for next year in Tokyo.

Toyota Motor Corp. is the worldwide partner of the 2020 Olympic and Paralympic Games and said the line-up of electrified vehicles will include versions of certain models as well as vehicles developed specifically to support the games.

The Olympic fleet also will include hybrid-electric Vehicles, plug-in hybrids, the Prius and Battery Electric Vehicles, including Accessible People Mover, ePalette, Toyota Concept-I and a walking are BEV to provide a unique and wide-range of diverse mobility during the games.

With its electrified line-up, Toyota, together with the Tokyo’s Olympic Organizing Committee are aiming to achieve the lowest emissions target level of any official fleet used at the Olympic and Paralympic Games, helping to reduce the environmental burden of the Games. 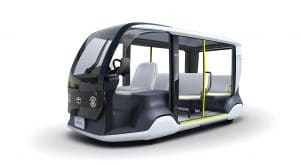 The Toyota APM will shuttle people from place to place within a venue.

Out of the approximately 3,700 mobility products and vehicles for Tokyo 2020, 2,700 vehicles will be part of the official fleet providing transportation support between venues during the Olympic Games.

(Toyota Could Take to the Air — Starting With Tokyo Olympics)

Preliminary calculations suggest that the carbon dioxide emitted by the commercially available fleet for Tokyo 2020 will average less than 80 g/km, resulting in a reduction by about half of the typical amount when compared to a similar sized fleet of mostly conventional gasoline and diesel models.

Additionally, nearly all the commercially available vehicles will also be equipped with Intelligent Clearance Sonar, designed to assist with braking in the event of unintended application of the acceleration pedal.

To help avoid collisions and reduce and mitigate potential damage or injury, all of the commercially available vehicles for staff transportation support will come equipped with Toyota’s preventative safety technologies, including “Toyota Safety Sense” and “Lexus Safety System plus.”

Toyota also will provide support for unique experiences with robots.

In addition, Toyota will also support games operations with other vehicles, including the mass-transit fuel cell bus “Sora,” assistive vehicles that help lift passengers into their seats or are equipped with an attached slope to allow passengers with wheelchairs access to enter the vehicle via the back door, and other vehicles such as fuel cell forklifts made by Toyota Industries Corp.