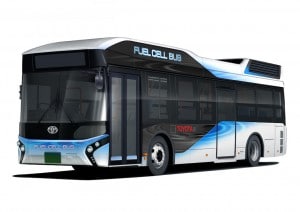 Toyota plans to introduce over 100 FC buses mainly in the Tokyo area, ahead of the Tokyo 2020 Olympic and Paralympic Games.

Toyota Motor Corp. announced it will start selling fuel cell buses in Japan starting early next year as it gears up for the 2020 Tokyo Olympics and Paralympics when it expects to have 100 or more hydrogen-powered transit buses in operation in the host city.

The company says it has already been field-testing the buses powered by fuel cells, which use hydrogen as the feed stock for a chemical process that produces electricity, and they will be assigned a fixed route in downtown Tokyo early next year.

More Toyota buses will come online in advance of the Olympic games as part of the Tokyo Bureau of Transportation’s plan to have more than 6,000 fuel-cell vehicles registered prior to the big games.

Toyota and Honda will lead the initiative, which will amount to the largest test in which fuel cells are used for transportation.

In addition to the partnership with Tokyo, Toyota Motor Corp. plans to sell fuel cell buses under the Toyota brand, starting next year. It will be the first time fuel cells will be sold publicly and the effort is designed to help increase public understanding as a form of public transportation.

The Toyota Mirai fuel-cell vehicle provided the blue print for the fuel cells that will power buses in Tokyo starting next year.

The system developed for the Mirai has been adopted to provide better energy efficiency in comparison with internal combustion engines, as well as to deliver superior environmental performance with no carbon dioxide emissions or what the Japanese describe as “substances of concern” while in operation.

The new fuel cell bus can be used as a power-supplying source in times of disasters as well. Toyota aims to expand the use of fuel cell buses as part of efforts to realize a hydrogen-based society, the automaker said.

Public interest in green energy has grown in Japan since the Great East Japan Earthquake in 2011 triggered the Fukushima nuclear disaster.

The Toyota FC Bus was developed by Toyota, based on the company’s experience developing FC buses together with its long-time partner Hino Motors, Ltd.

The Toyota Group considers the use of hydrogen as an energy source with substantial potential. Not only has Toyota has released the Mirai FCV, but it has also been developing forklifts powered by fuel cells as well as stationary fuel cells for use in homes as part of the company’s overall strategy.