Toyota: No Plans to Give Up on Cars

Despite shift by buyers to utility vehicles, cars big part of portfolio. 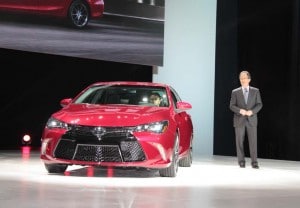 Toyota's Bill Fay said that despite the ongoing shift from cars to trucks and utility vehicles, the automaker plans to have robust car line-up.

Sales of new cars in the U.S. are in flux as trucks and utility vehicles claim an increasing share of the market.

He added that the Japanese automaker expects to deliver more than 400,000 Camrys this year and another 365,000 Toyota Corollas.

Fay added during a presentation at a preview of the company’s 2017 model line it is preparing to introduce a plug-in version of the Prius that can travel 22 miles in all-electric mode and Corolla as well as a revised version of Scion FR-S dubbed the Toyota 86 after a famous racer that carried that helped build the Toyota brand.

(Auto sales tumble in August. But Click Here to see why they could be in for a rebound.)

The new models will help booster the Toyota line in a very competitive market, said Fay, who noted the demand for Toyota’s passenger cars remains very strong despite the ongoing shift by American consumers to trucks and utility vehicles.

In addition, passenger cars continue to have a big appeal both for buyers from the so-called millennial generation and a set of Hispanic, Asian and African-American buyers that have helped build Toyota’s customer base, which is among the most diverse in the industry. More than half of the buyers of the compact Corolla are either Hispanic or millennials.

Fay insisted that Toyota will continue to offer vehicles such as the Toyota Highlander, which appeal to Toyota’s ever loyal “Baby Boomer” customers. “We aren’t going to give up on the Baby Boomers,” Fay said.

(Click Here to see how you can score a good deal on an outgoing 2016 model.)

But at the same time, Toyota is acutely aware of the changing demographics that will alter buying patterns among American consumers in the future.

“We intend to keep up with the shifts in the market,” he said.

Fay also said while Toyota has not prepared a forecast of 2017, the company expects the overall sales levels in the U.S. to remain stables. Sales might be down a bit but not by much, he said.

“We expect sales to be very similar to the past couple of years,” said Fay, adding he did not see any reason for sales to decline sharply in the months ahead.