More than 1 million line the famous boulevard for burnouts and bodacious rides. 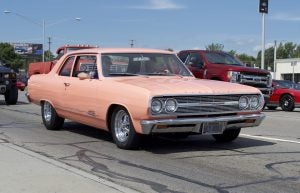 For many who attend the annual event, the cars that roamed Woodward for more than two decades – and for more than six decades if the “unofficial” cursing that’s always been part of Woodward’s history – aren’t quite the same. The cruise itself has changed a lot during years, moving from a regional event to what it is now — the world’s biggest automotive extravaganza.

The event draws as many as 1.5 million people to the eight-mile stretch of Woodward, packing folks in pretty tight. Throughout the years, it’s drawn complaints from businesses and residents along the boulevard, who complain about the traffic that makes it possible to get anywhere, attendees parked in driveways of unsuspecting homeowners and nowadays about corporate influences of the event.

However, this year’s event had a different feeling. Much of the annual griping that often dominated stories in the news and on social media in the past seem to fade into the haze of exhaust fumes and roar of modified engines for the 25thannual Woodward Dream Cruise. For every house on a side street with cones in front of it to prevent parking by non-residents, there seemed to be three or four houses with easy-up tents, banquet tables and chairs with adults and children alike celebrating the event.

The event designed to show off classic American muscle cars more than two decades ago has grown to an international extravaganza drawing people from more than across the country, but around the world. And this year, it seemed to do that in spades. 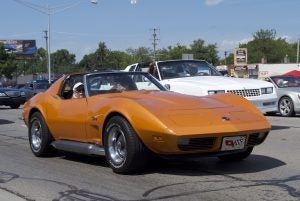 An estimated 40,000 vehicles like this ’70s era Corvette crawled down Woodward Avenue.

“This is my first time, but I’ve wanted to come for a while now,” said Greg Norris, who traveled from Melbourne, Australia. Norris, 61, said he envisioned nothing but a boulevard of “gleaming Chevelles, Mustangs and Camaros” but was instead stunned by the variety of vehicles on display.

“There was everything here,” an excited Norris said. “I was surprised by the number of Jags, Ferraris and even Mini’s here. It’s an amazing display.”

The Aussie was right. Fans celebrating a quarter century of “crusin’” were out in force in more than just loud, proud American muscle. However, as fans along the XX-mile stretch of Woodward showed with signs like “Rev it Up!” and “Let Me Hear It” it’s clear that a majority of attendees and cruisers were there to see classic American vehicles.

“I like it the most when they rev their engines,” said Trevor Sampson, 12, of Oxford. “We got a bunch of cars to rev them up. I like the new Mustangs when they do that.” Sampson added that he hoped to one day fix up a Mustang for his first car. He wasn’t particular about the year, “I like ‘em all!” he said.

There was plenty to like at this year’s event, and several automakers also made their corporate presence felt. Chevrolet rolled out its Performance Parts display, which included several vehicles.

In fact, there were more than a dozen on hand, including the new COPO Camaro, the new Camaro SS 1LE and the Dale Earnhardt Jr. 1970 Chevelle, which is powered by a new Connect and Cruise 556-horsepower “LSA” 6.2L supercharged crate powertrain system.

Also on display were a slew of the company’s latest in high-performance crate engines, engine parts, vehicle accessories. Representatives from the Chevrolet Performance Team were demonstrating products and answering questions about components including engine controllers, the Connect and Cruise crate powertrain systems and more.

Ford was also there in force with Mustang Alley, in which fans were able see 21 different years of the original pony cars on display. There were Mustangs of all years, mileage and colors stretched out around the site.

Ford had several places for fans to get a look at a variety of old and new Ford vehicles along or nearby Woodward.

The automaker has raffled off a tweaked Mustang for the last several years, donating the proceeds to JDRF to bolster its efforts to find a cure for Type 1 diabetes. Tickets are just $75 each.

After a two-year hiatus, Dodge and Mopar returned to the Dream Cruise. Ma Mopar set up shop this year in “The Loop” in Pontiac, joining forces with the huge crowd of racers from the Modern Street Hemi Shootout to create a display that is sure to pack more power than any along the route.

It also sponsored Roadkill Nights that took place days before the actual cruise. In fact, traffic before this year’s cruise, which is officially just a one-day event, Saturday, was out hot and heavy this year for the 25thanniversary of the event.

While the event has grown immensely during its two decades, fans come out in droves largely to see the vehicles rolling down Woodward. Tony Orlando and his wife, Cheryl, have attended every Dream Cruise since its inception “and the cruises that happened before that,” he joked.

Orlando, a project manager from Fowlerville, has a long-time passion for American classic cars, mostly Mopar products, although he did oohh and aahh at several non-Mopar offerings rolling down Woodward, and currently owns a 2002 Chevy Camaro with “a built engine. When you pull up next to it, you know what it is,” he joked.

He was there with a few other families who were clearly there for the entire day as they set up chairs, an umbrella and couple of easy-up tents to let them hide from the sun. They were cooking sausages as well as corn on the cob on a portable grille and enjoying sea of metal passing by them.

Orlando also had plenty of observations about the various types of cars cruising the street. While many folks are critical of entrance of non-American or non-classic cars “hogging the lanes” on Woodward, he offered up the best perspective.

“A lot of people say ‘oh, that car shouldn’t be on Woodward,’ but any car that’s a hot rod or any car that somebody is doing something to belongs on Woodward,” he said. “I don’t care if it’s a rust bucket that they’re fixing up – you know we’ve seen cars all week that the engine is all fixed up and they’re working on body, that’s hot rodding.”

The cruise has generally been the beneficiary of sun and warm weather, but it hasn’t always been so. There have been times where mother nature refused to play nice. There have been other issues that have cast doubt on the future of the show. More than a decade ago, the much of the eastern corner of the U.S. and part of the midwest, including the Detroit area, lost power.

No, not horsepower, but electrical power. The grid had a major meltdown leaving millions of people in the dark without the ability to run refrigerators, access the internet and, if you’re a Dream Cruiser, worst of all: pump gas. Then-Governor Jennifer Granholm considered mobilizing the National Guard to bring in temporary pumps for gas to ensure the even carried on as planned. The question is now: what’s next?