Fans and cruisers get an early start on the event. 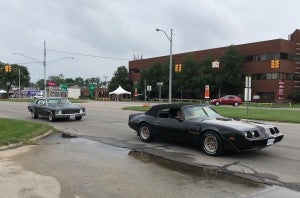 Classic car fans and owners began trekking up and down Woodward Avenue Friday in advance of the Dream Cruise.

The roar of powerful engines and the smell of exhaust began filling the air as the classic car fanatics began their annual trek to Woodward Avenue, north of Detroit, for the Woodward Dream Cruise.

The event begins today, but there is plenty of “pregaming” on the days leading up to the main event. On Friday afternoon, cruisers were out in force as car aficionados had already set up shop to enjoy the cars of their youth.

“I like the classic muscle cars,” said Charles Kinsley of Ann Arbor, Michigan. “I don’t care for the cars they remake.” Despite not being a big fan of the retro-based efforts of the Big Three automakers. Kinsley has attended almost every Dream Cruise since its inception in 1995.

The cruise began as an effort to raise money to build a soccer field in Ferndale, Michigan. The inaugural event drew 250,000 people, 10 times what organizers expected. The cruise now encompasses nine cities along Woodward and draws 1.5 million car fans and 40,000 classic cars of all types. 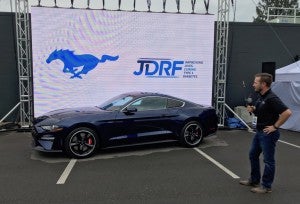 Ford is raffling off this one-of-a-kind Kona Blue Bullitt with the proceeds going to the Juvenile Diabetes Research Foundation.

Warren Selig of Columbus, Indiana, has been to the show at least five times and enjoys seeing all of the cars, but has a clear favorite: the Ford Mustang.

“My first car was a Ford Mustang,” he said. “It was a ’77 Mustang II with t-tops. I destroyed it. I’ve had five Mustangs overall. It just my favorite.”

Selig, whose cousin is former Major League Baseball commissioner Bud Selig, has had the aforementioned 1977 Mustang II as well as two 1995 models and two 2004 cars. Selig was perusing the Ford display with two friends just off Woodward.

Ford’s presence at the Dream Cruise is difficult to miss with Mustang Alley in Ferndale as well as a separate display of classic Mustangs as well as new Ford classics like the Ford GT. The company also unveiled a new “Bullitt” Mustang for charity. 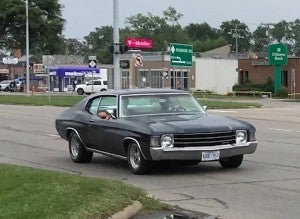 Cruisers were out in growing numbers on Friday, the day before the Dream Cruise kids off.

Equipped as a “Bullitt,” the new car is painted Kona Blue instead of green like the Bullitt. The automaker is raffling off the car and donating the proceeds to the Juvenile Diabetes Research Foundation. The company will sell 60,000 tickets at $10 each and hold the drawing on Nov. 9, according to Mark Schaller, Mustang marketing manager.

“We wanted to do something special,” he said. “We have a 20-year history with JDRF and we wanted to give away a car instead of just donating money. This one is really special. It has a VIN of 005 and Kona Blue. It is definitely one of one. You can’t buy this car anywhere else.”

(To see more about Ford building on its racing past with the new Cobra Jet, Click Here.)

The automaker was also offering rides in various new models as well. “You cannot beat this event,” said Jackie Smolarek of Dayton, Ohio, who loves the ’57 Chevy and early Camaros. “I come almost every year and it just gets better and better.”