But some nameplates will yet return from the dead. 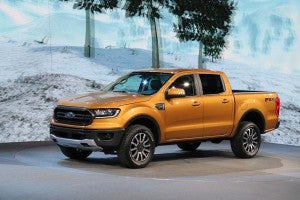 Death is not permanent, at least in the auto industry. Some old nameplates will return in 2019, like Ford's Ranger.

We’ll be seeing a host of new models make their debut during the 2019 model-year, including Ford’s newly reborn Ranger pickup, the brand-new Subaru Ascent SUV and complete makeovers of the Chevrolet Silverado and Ram 1500.

But there are also plenty of familiar products that will be waving bye-bye as the 2018 model-year wraps up or at some point during the 2019 season. The obituary list is rather extensive this year and, you likely won’t be surprised to learn, it’s primarily filled with sedans, coupes and sports cars, something that reflects the ongoing shift from passenger cars to light trucks.

That said, some of the products that might be gone or going soon could stage a comeback in the future if market trends again shift. The Ranger is a good example. Ford killed it off in 2011, anticipating the demise of the midsize pickup segment. New arrivals, like the also-reborn Chevrolet Colorado, proved there was life left in the segment. Ford is also getting set to bring back the long-absent Bronco.

Here’s a look at the U.S. models about to drive off into the sunset:

The Alfa Romeo 4C was never intended to sell in large volume, but still disappointed.

Parent Fiat Chrysler has big plans for the Alfa brand, but the little 4C didn’t live up to initial expectations. Actually, it was never expected to be a big seller but more of a halo car that stood out in a sea of bland sedans and SUVs. The coupe will be dropped this year, but the 4C convertible will remain for a while.

Buick will be dropping the Verano as it shifts from passenger cars to light trucks.

The Buick brand itself was set to disappear when parent General Motors emerged from bankruptcy in 2010 but was largely saved due to strong demand in China. It has since staged a remarkable recovery – though primarily due to demand for its new SUVs. The entry-level Verano sedan just never clicked.

Cadillac will drop the ATS sedan but retain the coupe version of the compact line.

Another small car with big aspirations, Caddy was hoping to challenge the likes of the BMW 3-Series with this compact sedan but just couldn’t win over enough buyers. Of course, it didn’t help that the market shifted to SUVs like Caddy’s new XT4. Look for a complete realignment of the Cadillac sedan line.

There’s been a developing market for Euro-style vans, but buyers never seemed to warm up to Chevy’s urban option. The Express was the result of an unusual partnership with Nissan which supplied the van to GM. That formula likely factored into the decision to drop Express.

GM has shut down all Australian production, including the SS.

This V-8 muscle car was ill-fated from the start. Its bland styling never delivered on the promise of what was under the hood. So, sales lagged, even though muscle cars have largely defied gravity in this truck-center. Add the fact that GM has shut down its factories in Australia, where the SS was produced.

The last Viper - and the original Viper Concept.

The original Viper was an awesome piece of retro design. The latest version stayed true to its styling but added a lot of technology purposely left out of the original. That drove up the price tag and made for a hard sell, especially when shoppers compared it to the latest-generation C7 Corvette.

The Ford C-Max lives on in other markets.

You might think the Ford C-Max would be a shoe-in. After all, Ford is abandoning almost all passenger models in favor of SUVs and CUVs, but buyers never pluggedinto the European-designed “people-mover,” in part because it was only offered in plug-in and all-electric configurations with limited range.

Even adding a sporty ST version didn't help the Fiesta.

The Fiesta is another victim of Ford’s decision to retain just the Mustang and a crossover/hatch version of the Focus among its once-broad passenger car line-up. It didn’t help that small, mileage-focused cars like the Fiesta have been especially hard hit by the ute revolution.

The Focus will live on with this new Active body style.

The Detroit automaker hasn’t offered a clear timetable but we should be seeing the compact Focus go away in almost all configurations but for the new crossover version that will be dubbed the Focus Active.

The full-size version of the Taurus was DOA.

The Taurus name once marked America’s best-selling mid-size sedan. Ford let it lapse into a rent-a-car special before briefly abandoning the nameplate. When it returned to production, Taurus was branded onto the haunches of a largely unloved and almost entirely forgotten full-size sedan.

A concept version of the Lincoln Aviator that will replace the unloved MKT.

Quick: which model is which: MKX, MKZ, MKC and MKT? Can’t sort them out? Few buyers could. Now, add an ungainly design and few will be sorry to see the big MKT crossover vanish. An all-new and much more attractive ute will replace it – and adopt a more memorable moniker as the Lincoln Aviator.

The 2019 Lincoln Nautilus will replace the MKX.

Here’s another Lincoln crossover with a forgettable name that didn’t help the Ford luxury brand’s aspirations. As with the bigger MKT, the nameplate is being retired and replaced by the Lincoln Nautilus. While the larger ute is a ground-up re-do, however, the Nautilus is more of a refresh.

Mercedes will replace the limited-volume B-Class with a new electric offering.

The tri-star brand offers an incredibly broad array of products and is adding more all the time. But, occasionally, it takes one away. That includes the B-Class crossover that was sold in only a few regional markets, like California, and only with an electric drivetrain. Expect a new Mercedes EV next year.

Nothing seemed to help boost demand for the ultra-quirky Nissan Juke.

The number two Japanese automaker has frequently done well with quirkily designed crossovers, like the Murano and Rogue, but Juke may have pushed things to the extreme. It is being replaced by a little less eccentric – and more affordable – model, the 2019 Nissan Kicks.

Will this iM hatchback do better with its third name, the Toyota Corolla Hatchback?

If at first you don’t succeed, try and try again. In the case of this quirky little hatchback, it originally debuted as the Scion iM and then took on the Toyota badge and some modest tweaks. It now gets some additional tweaks as the Corolla Hatchback. Toyota is hoping another cliché might fit: three’s a charm.

Also in for a name change, the Yaris iA.

Early on, it seemed like anything the Scion brand came up with found a youthful audience, but by the time the iA came to market nothing seemed to click. The automaker hoped it could kill Scion but save the sedan by badging it a Toyota. Now it will get another modest update and a new name: Yaris sedan.

The Touareg was VW's first SUV.

The VW brand has struggled in recent years and, along with fallout from its diesel emissions scandal, a lack of SUVs played a major role. Ironically, even as it adds a second version of the small Tiguan and the all-new Atlas, however, Volkswagen is pulling its original ute, the Touareg, out of the American market.

Death is not permanent, at least in the auto industry. We’ll soon see the Ford Ranger reborn, followed by the maker’s Bronco. Other models making a comeback include the Chevrolet Blazer, BMW 8-Series and Jeep Grand Wagoneer. There’s no guarantee automakers will get it right a second time, however, as we saw with the culling of the Ford Taurus and Dodge Viper.