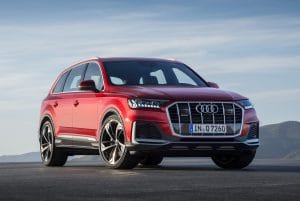 It’s not news that automakers are working double time to ensure that they are well-represented in the ever-growing sport-utility market that accounts for more than a third of all new vehicle sales. The competition is even tougher among the large SUV segment.

Kia, Hyundai, Ford and others have all hit the market recently with transformative entries hoping to get a slice of the ute sales pie. Others like Chevrolet and Toyota have new models that are clearly evolutionary counting on a loyal customer base to keep sales strong.

Now what’s Audi to do? They went with an “all-around update,” as the company describes it. The new model is definitely different from its predecessor, but it’s certainly not a back-to-the-drawing-board remodel.

The differences on the exterior of the Q7 can be spotted right away with a redesigned grille and some body panel tweaks that give a boxier, yet more aggressive look. It looks more SUV than CUV, which the previous model cannot say. 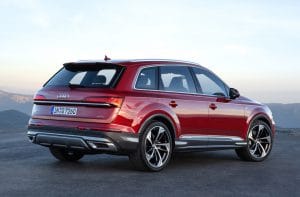 The two-part side air inlets have a much more expressive line, the company notes, just like the sill area that underscores the large SUV’s ground clearance and, in turn, its off-road capabilities. The headlights, which still come with the LEDs as an option, frame the nose of the Q7 to accentuate its width, lending an air of ruggedness to the ute.

In the back, owners get a reminder that it’s still a luxury SUV with a chrome strip between the taillights. This may be one of the few areas of the new ute that doesn’t try to convince you it’s a real off-roader more than it’s a lovely vehicle that you can take into the woods. With taut, flat surfaces spanning the entire width particularly across the lower half of the liftgate, owners get a nice looking ute that’s comparable to a BMW X5 in terms of style.

New technology makes the Q7 as nimble on the tarmac as it is on the trail head, the automaker suggests. With optional electromechanical active roll stabilization adjustable stabilizers reduce the body movements on uneven roads when driving in a straight line. With a sporty driving style, the focus is on optimum roll compensation – the tendency of the car to lean into the bend is reduced substantially. 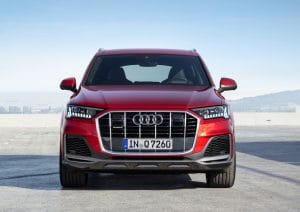 Additionally, all-wheel steering is also available, allowing the rear wheels turn by up to 5 degrees in the opposite direction at low speed, improving the ute’s agility. At highway speeds, the wheels steer slightly in the same direction to promote stability.

While the new tech improves the handling, Audi’s advanced air suspension provides for a comfortable ride when the driver isn’t engaged extreme navigation maneuvers. It’s also present for the Quattro model giving it plenty of non-tarmac options. The appropriate off-road mode can be selected via the Audi drive select dynamic handling system with its seven profiles. Air suspension comes standard on all seven-seater Q7 models.

All of the engines in the Audi Q7 are coupled to an eight-speed tiptronic and permanent all‑wheel drive. A choice of two diesel engines will be available at market launch. Shortly after the market introduction in September, a gasoline unit, followed also by a plug-in hybrid model, will join the line-up. 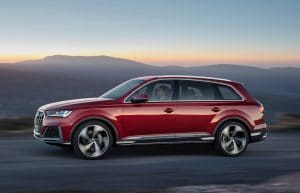 The new Q7 can carry five or seven passengers.

The newest Q7 is slightly larger than its predecessor, offering more elbow room for five or seven passengers, depending upon how it’s equipped. Audi optionally supplies the rear seat bench plus; all three seats can be moved individually fore/aft and the backrest angle adjusted, as well as a third seat row with two electrically lowerable seats.

A host of storage compartments, a new compartment in the instrument panel as well as the generous load capacity provide highly functional utility value. An electric tailgate is standard; foot-activated gesture control is available as an option. It’s this new level of electronic conveniences that really dominate the look and functionality of the rest of the interior. 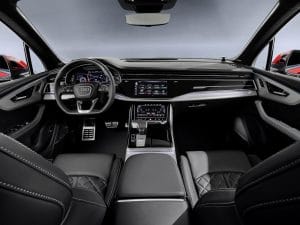 The cockpit of the Q7 uses two large touchscreens to control a variety of functions.

The Q7’s cockpit architecture is designed to work effortless with a new digital operating concept, incorporating two large touchscreens. They provide haptic and acoustic feedback when clicking on the touch controls. When off, the top display slots almost invisibly into the large black decorative surface. The cabin’s optional ambient lighting package illuminates the area in the dark.

The ute’s MMI navigation plus relies on connectivity to deliver up-to-date maps as well as real-time traffic information to help drivers travel the quickest route to their destination. In addition to WiFi accessibility for passengers, the Q7 offers in-car access Amazon’s Alexa.

The all-digital Audi virtual cockpit – and the optional head-up display – provide an individual speed recommendation as well as the remaining time until the next green-light phase if the driver is already waiting at a red light. The system thus contributes to a predictive and efficient driving style and facilitates a steady flow of traffic.

The adaptive cruise assist, which combines the functions of adaptive speed assist, traffic jam assist and active lane assist, reduces the driver’s workload – particularly on long journeys. In combination with efficiency assist it brakes and accelerates the Audi Q7 in anticipation of the conditions ahead. The emergency assist is also new: If the driver is inactive, the system brings the car to a stop and initiates protective and rescue measures. This function is active in assisted and manual modes. The new model will hit Europe first later this summer with North America to follow after that. No pricing was offered.