More aggressive styling, more features – but there also are plenty of new competitors. 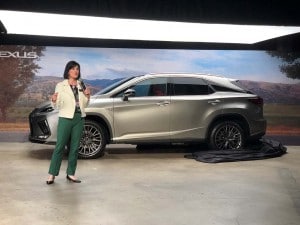 For countless American family buyers, the Lexus RX has served as the luxurious alternative to a minivan. Almost from the moment it was introduced, 22 years ago, it has dominated the high-line midsize crossover market, and that’s a position Lexus is determined to retain as what was once a small niche has become one of the U.S. luxury market’s largest segments.

Four years after launching the fourth-generation RX, Lexus is giving the CUV a significant enough “refresh” to stage a roll-out event for journalists in both the U.S. and China on Wednesday night. What they got to see was a vehicle with more distinctive styling, more high-tech features and more advanced safety gear as a standard feature – but with the 2020 Lexus RX facing significantly more competition than ever before, the question is whether it can maintain its traditional momentum.

Part of the challenge is that Lexus has, since it first launched in 1989, been a Baby Boomer brand, and the RX line is one of the examples of that, said Rebecca Lindland, an automotive analyst with RebeccaDrives. “The RX,” she added. “is no longer aspirational” for the subsequent generations “just starting their families.”

(This new Lexus offering is ready for both the track and the street. Click Here for a look at the Lexus RC F Track.)

With last year’s debut of a three-row model and the 2020 introduction of the RX F Sport, the goal is to “broaden our appeal to younger buyers,” responded Lexus Vice President of Marketing Lisa Materazzo, during an interview with TheDetroitBureau.com in Santa Monica, ahead of the mid-cycle update’s debut. 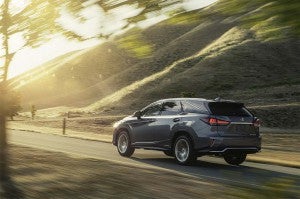 Lexus will offer both the original two-row, as well as the newer three-row, the 2020 RXL 450 hL hybrid shown here.

For 2020, the RX will be offered in both the traditional two-row configuration and as a three-row Lexus RXL. The new models get updated front and rear fascia, with thinner LED headlamps framing the brand’s now-familiar “spindle” grille. There are new taillamps and wheels, as well.

There will also be two optional packages, one featuring more aggressive exterior details, while the other, dubbed the F Sport Performance Package, actually enhances performance and handling with such details as a cold air intake for the gas engine model, as well as an adaptive damping suspension and tighter steering.

Even on the base model, however, Lexus claims the ride and handling should be more taut and sporty, in part due to the use of more spot welds and adhesives to stiffen up the chassis. That and the more sporty ride reflect the brand’s response to parent Toyota Motor Corp. CEO Akio Toyoda’s demand for more “passion” in its products.

Along with the conventional powertrain package, the crossover will continue to be offered with a hybrid option pairing a direct-injection 3.5-liter V6 gasoline engine with two electric drive motor-generators, a package dubbed the RX – and RXL – 450 hL. 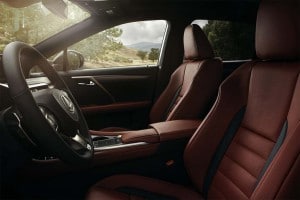 The hand-stitched interior of the RX 350 F-Sport.

Inside, the 2020 RX also adds plenty of the high-tech features Gen-X, Millennial and Gen-Z buyers crave, including both Android Auto, Apple CarPlay and an updated infotainment system that can be upgraded with a user interface more like Amazon’s Alexa, recognizing common speech rather than requiring users to learn stilted commands.

The crossover’s trunk can be opened by simply waggling a foot under the rear bumper. That’s by no means an industry first but has been a surprising absence from the RX until now.

Meanwhile, the RX now gets the advanced version of the Lexus Safety Sense system which adds a number of new Advanced Driver Assistance Systems – or ADAS, in industry-speak. These include the ability to spot bicyclists and pedestrians, even in low light, automatically applying the brakes if a collision is likely, as well as the ability to track and hold the vehicle’s position in its lane.

While not a complete tear-up, the 2020 model is significant enough that Lexus VP Materazzo believes it will not only maintain its sales numbers but “grow them slightly,” even in a down U.S. new car market. It certainly will need to pull that off. 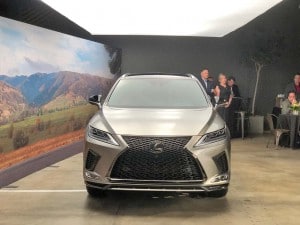 Lexus is hoping more aggressive styling will help increase the appeal of the RX to younger buyers.

“There is no doubt this is the absolute foundation and bread-and-butter of the brand,” said analyst Lindland.

The Lexus RX has shown surprising durability over the years, fending off one new competitor after another. But it has never faced as broad a competitive set as it does right now, with alternative high-line offerings including the Mercedes-Benz GLE, the Audi Q7, Volvo XC90, Infiniti QX60, Acura MDX, Cadillac XT5 and the new Lincoln Nautilus.

(Mercedes GLE 580 uses hybrid power to boost performance and mileage. Click Here to check it out.)

Yet, despite the steady flow of new product, the Lexus RX has defied naysayers. Last year, while the brand’s passenger car line-up saw an 11.2% decline in volume, to a combined 99,660, the RX line surged to 111,640. While that comparison might be downplayed considering the overall decline in sedan and coupe sales, the RX not only remained the best-selling Lexus but outsold all the rest of the brand’s SUV and CUV models combined.

But 2020 could be the test of whether the RX — and Lexus as a whole — will be able to make the critical transition from a Baby Boom brand to one that remains an icon for Gen-X, Millennials and Gen-Z buyers, as well.

(Lexus faces challenges when it comes to its traditional quality lead. Click Here for the story.