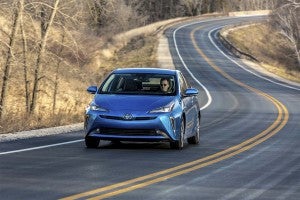 The Prius is one of the vehicles that helped Toyota lead the latest J.D. Power Vehicle Dependability Study.

Toyota and its luxury arm Lexus captured the top spots among mainstream and premium brands in the latest J.D. Power Vehicle Dependability Study, but the 2019 VDS also delivered more than a few surprises when it comes to how three-year-old vehicles are holding up.

The study placed Lexus at the top of the charts, followed by Porsche and then Toyota, but Chevrolet nabbed the fourth spot, a significant turnaround for a brand struggling to convince potential buyers it has overcome the quality and reliability issues of the past.

The new Power VDS shows that Japanese automakers no longer have a lock on vehicle dependability. Tellingly, only Toyota and Lexus landed in the top 10 this year, while the list also included two American brands, four from Germany and both of the South Korean carmakers operating in the U.S.: Hyundai and Kia.

Overall, the 2019 VDS found owners reporting 4% fewer problems with their vehicles this year – the study looking at problems with 2016 model-year cars, trucks and crossovers. 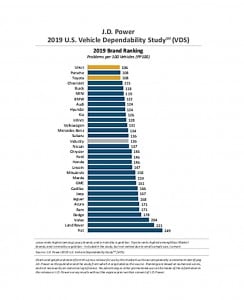 “Vehicles are more reliable than ever, said Dave Sargent, Power’s vice president of automotive research, though he added that the study showed some key issues remain, notably with voice recognition systems, transmission shifts and battery life.

The latter problem, Sargent explained, reflects all the new technologies being loaded into vehicles that can over-tax conventional vehicle batteries. He also warned that some of the new advanced driver assistance systems, like Lane Departure Warning and Automatic Emergency Braking, that automakers have begun rolling out are causing headaches that could show up in lower scores on the VDS in the years ahead. 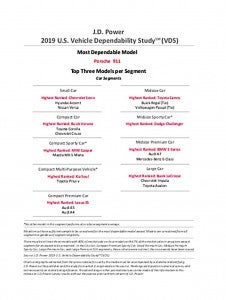 The 2019 study had some surprises, starting with Chevy’s strong performance. “They’re the star of the GM line-up now,” said Sargent, noting that Chevrolet owners surveyed for the VDS reported having an average of just 115 problems per 100 vehicles – 115 PP100 in Power-speak – compared to 108 for Toyota. (And, putting things another way, that translates into an average of just 1.15 complaints about absolutely anything going wrong with an average Chevy vehicle over those three years of ownership.)

GM’s Buick brand also did well, slipping into fifth place, but the automaker’s two other North American brands didn’t fare nearly as well. GMC clocks in at a weak 161 PP100 – compared to an industry average of 136 – while lofty Cadillac fell into the bottom third of the industry, at 166.

(Click Here for details about how infotainment systems are improving, according to JD Power.)

Even so, “Cadillac is the most improved of all the premium brands this year,” said Sargent, who also placed Mini, Subaru and Volkswagen on the “most improved” list. British-based Mini actually managed to outperform its own parent, BMW, this year, coming in just behind Buick as the number six brand. 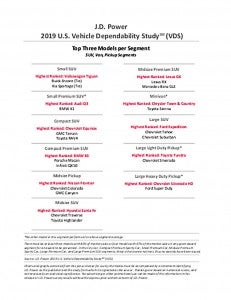 One of the year’s bigger surprises came from Honda. With a score of 146, it was well below average and barely mid-pack while its own luxury brand, Acura, landed sixth from the bottom, something that Sargent attributed to problems with all-new products that came to market three years ago with some serious problems. That includes the then-new 2016 Honda Civic.

Three European brands anchored the 2019 Power VDS, with Fiat at a rock bottom average 249 problems per 100, or nearly 2.5 times the headaches of a typical Toyota. Land Rover and Volvo scored only slightly better, with Fiat Chrysler’s Dodge and Ram finishing out the bottom five.

(To see more about the Power study finding a “total lack of trust” in autonomous tech, Click Here.)

Looking forward, Sargent said automakers are “desperate” to improve reliability as it serves as a “brand foundation,” improving loyalty rates, raising residuals – or trade-in values – and reducing the need for incentives.