Nothing Mild About Mercedes’ First Mild Hybrid, the GLE 580 4Matic 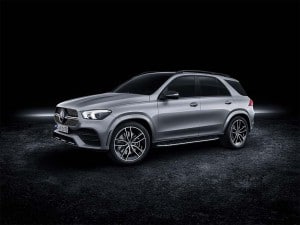 The new Mercedes-Benz GLE 580 4Matic gets a big boost out of its 48-volt assist system.

Mercedes-Benz is getting serious about electrification, as it demonstrated earlier this month by launching sales of its first long-range battery-electric vehicle, the EQC.

The German automaker plans to introduce at least 10 BEVs in the coming years, as well as an assortment of plug-in and conventional hybrids. To that list of electrified options you now can add the first mild hybrid, the Mercedes-Benz GLE 580 4Matic.

Mild hybrids typically come with small lithium-ion battery packs powering a relatively low-power electrical architecture. Even at 48-volts, however, the technology can be quite useful. In the case of the GLE 580, it powers the new active suspension system, as well as the Stop/Start integrated starter/generator, or ISG. But the biggest surprise is that it adds a performance boost that, at least briefly, lets the new variant outperform the AMG 53 version of the midsize SUV.

The powertrain starts out with a 4.0-liter twin-turbo V-8 making 483 horsepower and 516 pound-feet of torque. When the “EQ Boost” system kicks in, the hybrid assist system spools up an extra 21 hp and 184 lb-ft of torque. Because of the modest size of the battery, the added power lasts for only what Mercedes describes as “short periods of time.” Precisely how long, it isn’t saying, though it’s believed to be measured in seconds.

No matter, that should give you a real kick in the car seat, during those short periods, the GLE 580 topping the output of the current AMG GLE 53. The only more powerful model in the works is the upcoming Mercedes-AMG GLE expected to make at least 550 hp. 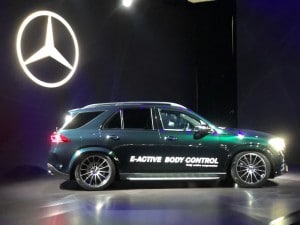 (Audi adds mild hybrid assist with the new Q8. Click Here for a review of the new SUV.)

The beauty of the package is that, when your foot isn’t nailed to the floor, the mild hybrid system should give the GLE 580 a nice improvement in fuel economy, as well. The numbers could come close to those of the six-cylinder GLE 450, in fact, which makes 19 mpg City, 24 Highway, 21 Combined. One way it pulls that off is by using the ISG to operate ancillary components, like the water pump, reducing frictional losses.

If that’s not enough to justify the move to electrify the GLE, Mercedes says the 48-volt system also powers the new Active Body Control suspension – which it bills as the world’s first active suspension running on a mild hybrid system. The technology can keep the SUV stable, all but eliminating body roll, squat and dive, even in aggressive maneuvering. Active Body Control is an option on the GLE 580, with an air suspension offered as standard fare.

(It may be betting big on electrification, but Daimler says the diesel isn’t dead. Click Here for the rest of the story.)

Other features include a pair of dual, 12.3-inch screens. There’s a reconfigurable one in front of the driver replacing the traditional, mechanical gauge cluster. The other handles infotainment duties and now features the MBUX Interior Assistant. That’s more than just a gussied-up voice control system, functioning more like the Amazon Alexa and Google Home voice assistants.

As for mild-hybrids, 48V systems are beginning to show up on a wide range of products, from luxury sedans to off-road utes like the latest-generation Jeep Wrangler. Industry analysts expect the technology to become commonplace by mid-decade as various electrification options will be essential to meeting ever-tougher global emissions and fuel economy guidelines.

(Volvo set to cover all the electrified bases, from mild hybrid to all-electric. Click Here for more.)