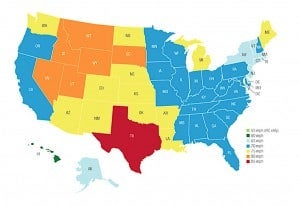 There are now 41 states with highway speeds higher than 70 mph.

Improvements in the safety of new vehicles such as stronger materials, better designs and new technology haven’t been enough to offset the effect of increased speed limits on traffic fatalities.

Higher speed limited can be tied to the deaths of nearly 37,000 people during the last 25 years, according to new research by the Insurance Institute for Highway Safety. In 2017,  1,934 were killed because of increased speed limits, IIHS found.

“Every time you raise speed limits, you see more deaths,” said Charles Farmer, IIHS vice president for research and statistical services, who conducted the study. “Sure, you save a little bit of time driving, but there’s this trade-off that you have to admit is there and decide whether or not it’s worth it.”

The study found a 5 mph increase in the speed limit causes an 8% increase in death rates on interstates and freeways, and a 3% increase in fatalities on other roads.

The research, an update of a 2016 analysis, calls attention to the trade-off between a few minutes of saved travel time and the increased risk of fatalities. It comes as IIHS and the Governors Highway Safety Association prepare to host a forum on the speed problem. 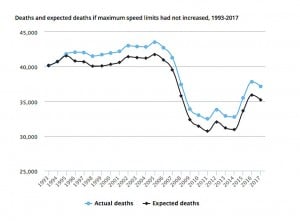 “Speeding has become almost a forgotten issue in traffic safety discussions, and clearly we’re losing any sense of limits,” said Darrin Grondel, chair of GHSA’s Executive Board and director of the Washington Traffic Safety Commission.

“This gathering is an exceptional opportunity to craft the building blocks of a comprehensive speed management program that we can translate into action to really make a difference in our work of saving lives.”

(Click Here for more about the rise in pedestrian deaths.)

The National Highway Traffic Safety Administration reported that 9,717 people were killed in 2017 in crashes that involved speeding, accounting for more than 1 in 4 deaths on the road. Texas leads the nation with the highest speed limit: 85 mph on some roads. Six states have roads with a speed limit of 80 mph. In all, there are 41 states with speed limits of at least 70 mph.

“It’s going to be hard to reverse any of these,” Farmer said. “What I’d really like to see is that we just stop talking about raising them. I think they’re high enough.”

The study suggests that the rationalization that raising speed limits just merges the law with reality since most drivers already speed, is not true. In fact, it only gives drivers a license to drive even faster that they had been.

(To see how highway fatalities could again top 40k this year, Click Here.)

“Driving 70 instead of 65 saves a driver at best 6½ minutes on a 100-mile trip,” Farmer said. “Before raising speed limits, state lawmakers should consider whether that potential time savings is worth the additional risk to lives.”