Level 4 autonomy and a slew of tech is packed into the concept. 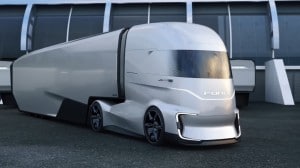 Ford's F-Vision concept debuted at the IAA show in Germany. For now, it's just a concept officials claim.

Does Tesla have another competitor in the battery-electric semi truck arena? Maybe.

Ford Motor Co. took the wraps off an electric semi truck concept called the F-Vision at the IAA Commercial Vehicles expo in Hannover, Germany. The company’s vision is similar in many ways to Tesla’s offering with a high level of autonomy and a sleek exterior design.

However, it would appear that Elon Musk and the gang in Palo Alto can breathe easier – at least about this anyway – as Ford says the new F-Vision is only a concept.

Unlike auto shows, generally when a maker says something is a concept, there is some lag time between denial (i.e. “It’s just a concept”) to voila! (i.e. “You can put your deposit down now”).

(Tesla semi truck could go full Mad Max on other drivers. Click Here for the story.) 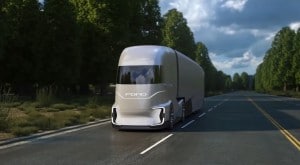 The F-Vision features plenty of advanced technology, including the ability to automatically tint its windows.

Obviously, Tesla is the biggest exception to that “rule.”

The F-Vision concept is Ford Trucks’ vision on electrification, autonomous and connected drive, lightweight and zero carbon emission products. It cares about humans’ priorities both inside the cab and on the road, as well as the load being carried, and aims constantly to connect with the environment and users and communicates, the company notes.

Ford Otosan of Turkey designed the truck and not only is the exterior futuristic looking, but the actual vehicle possesses some features one might not expect. Of course, it’s autonomous and can link automatically with its trailer. It can convoy with other vehicles.

(Click Here for more about Nikola partnering with Bosch on new electric semi.)

However, if also features cameras in place of side mirrors, and an automatically tinting windshield. It’s said to be capable of automatically linking with its trailer, as well as operating in a linked-together convoy mode. 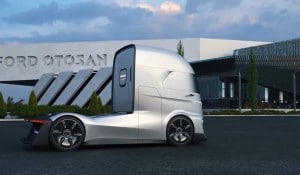 The F-Vision was designed by Ford Otosan in Turkey.

If Ford does bring it to market, it’ll not only have the aforementioned Tesla truck to contend with, but also Volvo. The Swedish truck maker is working furiously on its Vera electric semi concept. The truck has no cab at all because it’s entirely autonomous.

Additionally, other companies in the segment, like Freightliner and Cummins, aren’t just sitting idly by. Ford may also need to inspect its new F-Vision closely to ensure it’s not too much like Nikola Motors entry into the segment.

(Freightliner takes aim at Tesla with two big EV semis and a new e-mobility center. Click Here for the story.)

Nikola sued Tesla earlier this year and could be awarded up to $2 billion in damages if it finds in favor of the company’s suit. Nikola’s case, however, isn’t looking too good. Recently, the United States Patent and Trademark Office found that the two designs differ enough to award separate patents. If Nikola fails to win in court against the troubled Tesla, its odds of successfully suing Ford would be even smaller still.