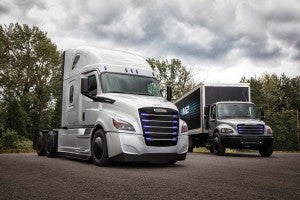 Freightliner, the U.S.-based truck subsidiary of Daimler AG, is taking direct aim at Tesla with the debut of two new battery-powered semis that it plans to begin fleet testing later this year.

The eCascadia and eM2 join a range of smaller delivery trucks that Freightliner and other Daimler truck brands have been rolling out over the last couple years. A number of major freight and delivery companies, ranging from UPS to PepsiCo, have expressed interest in the clean, fuel-efficient technology. That has drawn a number of vehicle manufacturers into the emerging field, including Volvo AB and Volkswagen AG, as well as Freightliner and Tesla.

Daimler also plans to set up a new Automated Research and Development Center near Freightliner’s headquarters in Portland, as well as a new E-Mobility Group to help share technologies among its various truck brands.

“We are the undisputed global leader of the trucking industry and we intend to remain in that position with electric trucks and buses,” Daimler Trucks chief Martin Daum said in a statement.

That was echoed in a comment by Roger Nielsen, the president of Daimler Trucks North America, that took a clear shot at Tesla, a company that has not only never built a truck before but which has had major trouble meeting production targets and quality goals for its passenger vehicles. But it also underscored the fact that Daimler is taking Tesla’s imminent arrival in the truck market as seriously is it is the California company’s electric passenger car line-up. 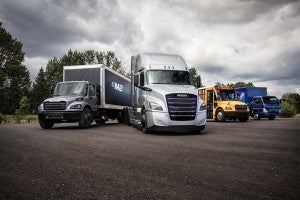 The new Freightliners will join a range of other Daimler battery-powered trucks.

“We have decades of experience in successfully producing durable commercial vehicles in high volumes that stand up to the demands our customers place on them,” he said adding that, “We now bring this unmatched experience and expertise to the electric truck category.”

The Class 8 eCascadia is the beefier of the two new Daimler electric trucks, with a drivetrain capable of pumping out a peak 730 horsepower. It will draw power from a lithium-ion battery pack storing what Daimler describes as 550 kilowatt-hours of “usable” capacity. (That reflects the fact that battery life is maximized by retaining at least a small amount of charge at all times.) The pack will deliver an estimated 250 miles per charge, and can get another 80% of its range after plugging into a special, super high-speed charger in just 90 minutes.

The eM2 makes 480 horsepower and draws energy from a 325 kWh battery pack with 230 miles range. It will get an additional 184 miles after a 60 minute high-speed recharge, according to Daimler.

Daimler is the world’s largest truck manufacturer, its Freightliner unit the best-selling truck brand in North America. The Portland, Oregon-based subsidiary has been pushing into new areas of technology in a bid to maintain its lead. In May 2015, Freightliner became the first manufacturer to be licensed by the State of Nevada to test autonomous trucks on public roads. It already has begun selling some of its smaller battery-powered delivery trucks. 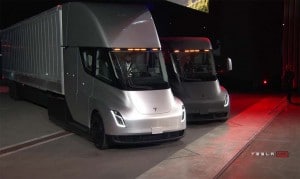 Tesla's Semi made its debut last November, but production is still several years away.

But it faces tough challenges in both of these emerging areas. While Freightliner has focused on  autonomous trucks that will still require a human backup operator, Uber’s Otto division is one of several competitors working on trucks that can dispense with the driver entirely.

In the alternative propulsion field, Daimler and Freightliner faces challenges from the likes of Volvo AB and Volkswagen, two traditional giants in the trucking industry. But there are also new start-ups, notably including Tesla which last November revealed several prototype versions of its big Semi model.

At a well-attended debut event, CEO Elon Musk said the Semi would yield “500 miles at maximum weight, at highway speed, so you are doing 60 mph.” He has since hinted that the truck would get even greater range once it gets into production.

As with electric passenger vehicles, range could be a major differentiator for potential customers. Tesla also intends to enhance its appeal by setting up a network of extra powerful Superchargers for its trucks, many set to go in alongside the Supercharger network already being rolled out for vehicles like its Models S, X and 3.

While Freightliner’s electric semis are relatively conventional in appearance, meanwhile, the Tesla Semi is adopting a more sci-fi like design that should also improve aerodynamics, further enhancing its efficiency.

First mover advantage could play into Freightliner’s hands, however. The company plans to let some of its customers begin field-testing 30 of the eCascadia and eM2 trucks this year. It has not said when mass production will begin though Tesla is still several years away from launching its own volume production.

While the emphasis is on battery power, Utah start-up Nikola Motors is focused on hydrogen.

The California-based manufacturer isn’t the only new start-up hoping to get into what many analysts believe will become a lucrative market for trucks using alternative propulsion. A California start-up, Thor Trucks, plans to launch a Class 8 semi with 300-mile range in 2019, while BYD, a Chinese venture backed by Warren Buffett that is already producing electric buses for the U.S.., is getting ready to start building garbage trucks, delivery trucks and other medium-duty, shorter-range commercial vehicles at a plant in Canada.

And Toyota is currently testing a prototype hydrogen-powered semi at the two major ports in Los Angeles. A Utah-based start-up, Nikola Motors, is working on its own fuel-cell-powered semi and plans to launch limited production before the end of the decade.

(Why is Nikola Motors suing Tesla? Click Here to find out.)

Daimler’s truck operation this week forecast a big jump in both sales and earnings for 2018. It also said it plans to pump $2.9 billion into R&D through the end of 2019, about 20% for advanced technologies including electrification, autonomy and connected vehicles. Among other things, it will set up a new Automated Research and Development Center near Freightliner’s headquarters in Portland. Its new E-Mobility Group will help share technology and hardware across Daimler’s numerous truck brands, including Mercedes-Benz and Fuso, the latter already running trials on an electric delivery truck in New York City.