Genesis Evolving as a Luxury Brand With First-Ever Concept: Essentia 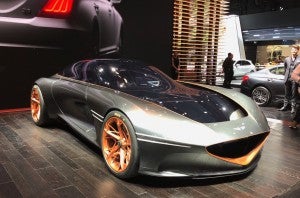 Genesis continued its evolution as a luxury brand with its first-ever concept vehicle, the Essentia.

The evolution of Hyundai’s nascent luxury brand, Genesis, took another step forward in New York City with the introduction of its first-ever concept, the Genesis Essentia.

The battery-electric vehicle features a lightweight carbon-fiber monocoque, a robust, multi-motor electric powertrain and a custom-tailored interior. Essentia is “a true GT car and challenges the status quo as the ultimate manifestation of Genesis design and engineering,” according to Genesis.

The new concept, including its tough to miss clear hood, hit the stage at the New York International Auto Show and is intended to cement the brand’s perception as a long-term player in the growing luxury segment.

But the design is focused on “Athletic Elegance,” which should give observers some clue as to what the luxury brand’s design identity will be going forward.

(To check out our first drive in the Genesis G80, Click Here.) 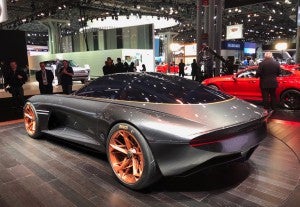 Officials claim the design marries “power and precision through artistry.” The concept was inspired by GTs of the past with a long front and raked cabin. The Stardust Gray Metallic exterior and the carbon fiber-bodied Essentia is low to the ground making it appear very aggressive and giving it a distinct look.

“We understand our obligation as a luxury car manufacturer to create objects of desire, sparking passion and inspiration by emphasizing a culture while exceeding expectations in terms of technology and connectivity, bringing our outside world seamlessly to the inside of the vehicle,” said Manfred Fitzgerald, Global Head of the Genesis Brand.

“This is what the Genesis Essentia Concept is all about, and we are thrilled to introduce our interpretation of an all-electric, two-door Gran Turismo here in New York.”

(Click Here for details about Genesis’ 3 Series fighter, the G70.)

The brand has been growing in more conventional ways during the past year, including adding the G70 to its line-up during the show as well as growing its G80 offerings. The company is also working with its existing dealers to set up freestanding dealer stores separate from Hyundai’s locations, much like Lexus, Acura, Cadillac, etc.

However, the concept is really another milestone moment for Genesis.

“The Genesis Essentia concept defines our vision for an electric Gran Turismo that integrates Athletic Elegance and Genesis DNA as defining parameters,” said Executive Vice President Luc Donckerwolke, Head of Genesis Design. “A Gran Turismo typology highlights our ambition as a luxurious car brand for the connoisseurs and it is the perfect base to project our DNA in the future.”

Now, we need to see when the brand will roll out an SUV to meet the wants of consumers in that segment, much like Cadillac’s XT4 or the Lexus UX that made debuts in the Big Apple this week.