BP economist predicts vehicles will run twice as much, leading to price drops. 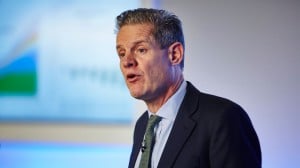 BP Chief Economist Spencer Dale predicts that the prices of ride-sharing companies will fall 50% with the arrival of autonomous vehicles.

With the first wave of self-driving cars expected to reach the streets in the early 2020, the price of ride-sharing trips offered by Uber and Lyft could drop by half, according an estimate from one of Great Britain’s leading energy experts.

BP Chief Economist Spencer Dale said at an International Petroleum Week conference in London that self-driving cars initially will be too expensive for normal people to buy and instead will be snapped up by commercial companies.

“The vast majority of these will be purchased by commercial fleets offering mobility services, so think Uber or Lyft. The potential here — if you suddenly get an Uber or Lyft without paying for a driver — is that it leads to a significant fall in the cost. We estimate that could reduce the cost of that type of service by around 40% or 50%,” Dale said during his appearance at the conference.

“So as a result of this, what we expect to see in the 2030s is a huge surge in the (number) of kilometers traveled by fully autonomous mobility-service cars,” he added.

(Waymo gets the go-ahead for first autonomous ride-sharing program. Click Here for the story.)

Dale discussed autonomous cars as part of the group’s 2018 Energy Outlook report, which included a heavy focus on electric vehicles.

He predicted that 15% of all cars on the roads in 2040 will be electric, but that the use of low-carbon wheels will be higher than for their conventional counterparts. That means 30% of all kilometers traveled in 2040 will be made in electric cars, according to Dale’s forecasts.

“The low running cost of electric cars relative to conventional international combustion engine cars means the vast majority of these fully autonomous shared mobility will be electric. As a result of which, that’s what increasing this intensity [in passenger kilometers],” he said.

(Click Here to see why more Americans are ready to trust self-driving vehicles.)

Being employed by an oil company, Dale, of course, also touched on the impact this development will have on the energy industry.

“The impact on oil demand is pretty small, it’s about 2 million barrels a day. One reason why it’s so small is because we think quite a significant part of the impact of car manufacturers selling more EVs will be offset by those car manufacturers investing less in other types of efficiency in order to achieve their vehicle efficiency standards,” Dale said.

To put the 2 million barrels into perspective, global oil demand currently stands just shy of 100 million barrels a day, according to data from the International Energy Institute.

A recent study by the University of Michigan Transportation Research Institute recently released a report that indicated commuting to work is already less expensive in some metropolitan, such as Los Angeles, than commuting by personal vehicle.