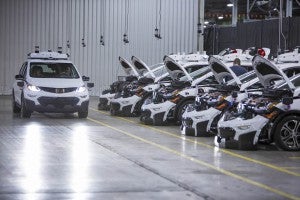 Waymo, Uber and Lyft have all begun testing autonomous ride-sharing vehicles and the Google spinoff plans to field a small number of completely driverless models this year. General Motors, meanwhile, plans to start building a version of its Chevrolet Bolt EV, sans steering wheel and pedals, next year that could be used by Maven, its own sharing service.

While the development of self-driving technology is moving faster than many proponents predicted just a few years ago, the auto and ride-sharing industries face several potential roadblocks, including state and federal restrictions as well as the uncertainty of how consumers will respond. But a new survey by AAA released Wednesday finds that Americans are rapidly becoming more comfortable with the ideas of not only taking their hands off the wheel, but also having no wheel in the car at all.

“Americans are starting to feel more comfortable with the idea of self-driving vehicles,” said AAA Automotive Engineering and Industry Relations Director Greg Brannon. “Compared to just a year ago, AAA found that 20 million more U.S. drivers would trust a self-driving vehicle to take them for a ride.”

That said, 63% of those surveyed by AAA remain fearful of getting into a fully driverless vehicle, down from 78% a year ago. 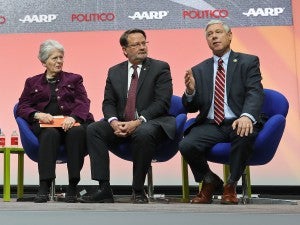 A separate study by website Autolist.com found a similar “deep divide … in the trust of autonomous technology” when it polled more than 21,000 American vehicle owners. That study found that 12.3% fewer women than men would trust a self-driving car. And, perhaps no surprise, prospective EV owners “owners are 23.2% more likely to trust fully self-driving cars than people not considering an EV.”

There are, according to researchers and analysts, a number of reasons for that divide. That includes not only age and gender but a person’s comfort level with technology, in general. Complicating matters, the first prototype autonomous and full driverless vehicles are just starting to roll out onto the nation’s highways, so few members of the public have much experience with self-driving technology.

That could begin to change in a hurry, however, if Congress follows through on proposals that would authorize widespread testing, allowing perhaps 100,000 or more self-driving vehicles on U.S, roadways by decade’s end. GM in recent weeks petitioned the National Highway Traffic Safety Administration to allow it to roll out and field test as many as 2,500 of the driverless Chevy Bolts annually.

Meanwhile, six automakers have launched 2018 models with at least limited hands-off capabilities, including the Cadillac CT6 with Super Cruise and the Audi A8 with Traffic Jam Pilot. Other models, such as the new 2019 Nissan Leaf, come with systems that can compensate for driver mistakes, such as weaving across lane markers or attempting to pass a vehicle when there is oncoming traffic.

“There are many more vehicles on the road with advanced driver systems like automatic emergency braking or adaptive cruise control,” Brannon says. “People (who have) experience with these technologies are 75% more likely to trust them.”

The AAA study found an even bigger gender gap than did Autolist in how Americans feel about riding in a self-driving vehicle. A full 73% said they would be “afraid” of getting into such a vehicle, compared with 52% of men. Other findings:

That may be because Americans, in general, have high praise for their own driving skills. Three-quarters of all U.S. drivers – including eight in 10 men – rate their driving skills as better than average.

Government and industry data, however, indicate about 93% of all crashes are the result of human error. That’s led many proponents of self-driving vehicles, including former NHTSA chief Mark Rosekind, to predict the technology will eventually all but eliminate highway crashes, injuries and fatalities.

Some consumer groups are hedging their bets. California-based Consumer Watchdog, as well as Joan Claybrook, the NHTSA chief under President Jimmy Carter, are urging government regulators slow the race to put self-driving vehicles on public roads until it is clear the technology is truly safe and reliable.